Around the Hall: NAHS Barnstorming Game 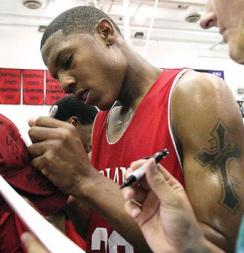 You read how Big A — our man on the scene — reacted to the various exploits of IU’s incoming recruits last night … now read how those mainstream guys (you know, the ones who get paid to do this) saw things:

Rick Bozich: Louisville Courier-Journal: Nights like last night are the reason this is the best college basketball area in the country. When I arrived at New Albany High School gym before 5:30 p.m. yesterday, there were already nearly a hundred people waiting outside, eager to be there when the doors opened at 6 for the scrimmage game between Indiana recruits and a group of Southern Indiana high school players.

To watch a scrimmage. Top that Tobacco Road. Don’t think so. …

Eli Holman showed he has the potential to give Sampson quality minutes around the basket. He’ll give D.J. White something he didn’t have last season — help on the glass and a guy who can allow White to go to the bench for a few minutes. Holman was the biggest surprise to me. He is more polished than I thought he would be. Nice tough. And he can really, really run.

Doug Wilson, Bloomington Herald-Times: Ellis, at 6-foot-5, has different skills than any Hoosier guard of recent years. He drew defenders to him and whipped the ball to open teammates. His stat line: 12 points, 14 assists, 16 rebounds. … The big question about Holman — besides his academic eligibility, which has now been resolved — has been his lack of polish offensively. All he did Thursday was score 30 points with 10 rebounds and six blocks.

Sure it was against smaller, less athletic players, but I saw Ben Allen play in a similar recruit game against similar players two years ago and have a lot of trouble capitalizing on his height advantage. The IU recruits lost that game.

No knock on Allen or any of the recent Hoosier big men, but none of them outside of D.J. White has had physical ability like Holman.

Jody Demling, Louisville Courier-Journal Recruiting: Mackey said he hoped the showing with his future teammates would end any speculation that he might be wavering on his commitment.

“I like the colors (of the Indiana jersey he was wearing),” Mackey said. “I’m an Indiana boy now. And it feels great.”

There’s a bit more scattered about the interwebs, but not as much of note. What’s universally evident is the palpable sense of excitment, even among those that are supposed to take stern, objective stances toward their teams. Can we just start the season already?

Also, yes, that is a photo of Eli Holman, and yes, he is likely to be my favorite player this year. In case you were wondering.