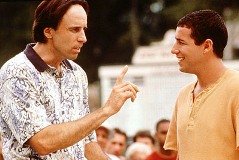 I fashion myself at least a novice golfer — and a poor one at that — but I’d never heard of “wolf golf” until today. If you are unfamiliar with it yourself, hop on over here and get your learn on, son.

In any event, IU coach Kelvin Sampson will be participating in a wolf-style golf tournament August 12 and 13 in Sellersburg, IN., with the likes of Fuzzy Zoeller, John Daly and Lee Trevino.

Rounding out the field will be I.U. men’s basketball head coach, Kelvin Sampson. This will be Sampson’s first appearance and he will be going head to head against Zoeller, Trevino and Daly utilizing the “wolf” format. This will be Sampson’s second year as the head coach, and currently boasts ten consecutive 20-win seasons and 14 straight post-season appearances. He was also named National Coach of the Year in 1995 and 2002.

All four players will be wearing microphones while competing. The competition will be an eighteen-hole match utilizing the “wolf” format. Sampson will be able to use his USGA handicap.

I don’t know about you, but this foursome seems pretty grand — especially when you throw in the microphones. You have John Daly, he of booze and wife-scratched fame, Lee Trevino, who was excellent in Happy Gilmore, and Fuzzy Zoeller, who sued a Miami-based company for defamatory marks left on his Wikipedia entry. This is an interesting group of guys.

I just hope Sampson makes it out alive.