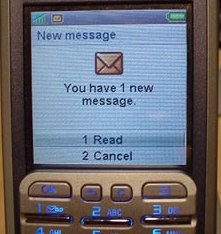 In another effort in their mission to control the world, the NCAA Division I Board of Directors approved in April a ban on text messages to recruits. The ban, which will go into effect on August 1, prevents the following:

NCAA Proposal No. 2006-40 was adopted in April “to specify that electronically transmitted correspondence that may be sent to a prospective student-athlete is limited to electronic mail and facsimiles.”

In simple terms for those not versed in legal jargon: No text messaging.

With August rapidly approaching and the July recruiting evaluation period in full swing, the topic is being discussed and debated in gyms across the United States.

Xavier coach Sean Miller, in today’s Cincinnati Enquirer, talked about why he is against the ban:

“Calling somebody at home these days is almost impossible because everybody is on the go,” he said. “But if you call them on their cell phone, you don’t know where they are. They could be in the middle of something. So sending a text message is a great, non-invasive way to communicate.”

I agree with Miller on all points except for one. Text messaging is certainly not a “non-invasive” way to communicate. In fact, it’s quite the opposite. Imagine a high school kid getting upwards of 10 messages per day, all from different coaches. That sure seems like a lot to keep up with. And in most cases, major recruits are getting a lot more than 10 messages per day.

I’m not saying that the kids don’t like the attention they’re getting. They certainly do and most kids enjoy text messaging. But come on, Coach Miller, it’s hardly “non-invasive.”

So what do you think about the ban on text messages? Are you for it or against it? How will it change recruiting? We’re interested in hearing YOUR thoughts.