Duke coach Mike Krzyzewski met with the media following his team’s 91-81 win over Indiana on Wednesday in the Big Ten-ACC Challenge at Simon Skjodt Assembly Hall. Watch his postgame comments below: 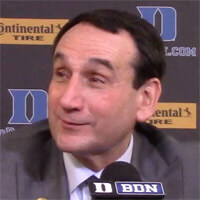 Around the Hall: Bob Knight and Wednesday’s practice

Around the Hall is recommended reading from the Inside the Hall crew. You can send us a link at [email protected] + Andy Katz talks to Mike Krzyzewski and the Duke coach says that Indiana should “celebrate” Bob Knight before he ...

One thing I thought I’d never see: Bob Knight in his underwear

I’ve gotta hand it to the brass at Activision. They’ve consistently produced an all-star lineup for their Guitar Hero commercials. And their latest installment, which apparently debuted during this weekend’s NCAA Tournament, is no exception. Prepare to witness Coach Knight, ...