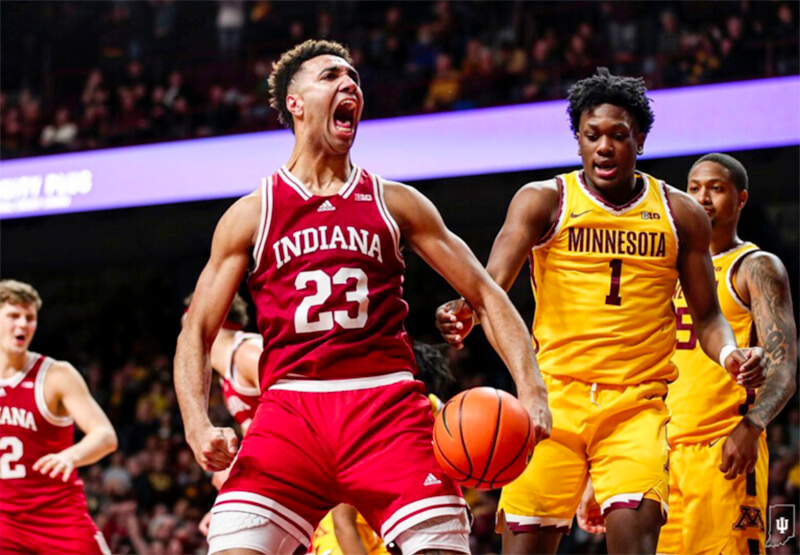 Thoughts on a 61-57 win against the Golden Gophers:

Just how Indiana drew it up tonight, huh?

This was a seriously weird game. Minnesota, the worst team in the Big Ten, could barely field a lineup due to various injuries. The Hoosiers, playing as well as anyone in the conference, were without Mike Woodson due to COVID-19.

About all the Golden Gophers could do was throw a 2-3 zone at Indiana to muck it up and launch 3-balls and try to get to the rim in their 5-out offense, hoping the basketball gods looked upon them with favor tonight. It almost worked. While Indiana could have been a bit feistier to 50-50 balls, it felt like Minnesota was getting all the bounces and rolls and caroms. This rebound and putback from Will Ramberg was perhaps the peak of it all.

Still, Indiana just kept at it after a sloppy start, erasing a six-point Minnesota lead with 6:00 to go in the first half and turning it into a three-point halftime advantage (33-30). The Hoosiers held the Golden Gophers to .87 points per possession and missed some good looks late in the half.

It seemed like all Indiana needed to do was keep coming in the second half, throw the knockout blow and that would be that. It wasn’t the best start, but Indiana eventually pushed the lead to seven points. A Jalen Hood-Schifino 3-pointer would have given Indiana a double-digit advantage with 12:01 to go. Instead, it didn’t fall, which was the theme from deep tonight for IU (4-of-14, 28.5 percent).

Minnesota went on a quick 7-0 run to tie the game back up. And then it ended up holding a lead for much of the rest of the game — the Gophers were up from the 6:22 mark until 47 seconds to play. Credit Minnesota for being good with the ball (8 TO%) and never giving up despite the circumstances. But Indiana was able to put a 7-0 stretch together to close out the contest, sneaking away with the victory tonight when things looked to be slipping away.

And who led the charge? Trayce Jackson-Davis (25 points, 21 rebounds, six blocks), of course.

After blocking a shot and getting the board, Jackson-Davis dunked it home as the Hoosiers got up the court quickly with 2:02 remaining to cut it to one point. And then getting a ton of defensive attention, he found Race Thompson, who was fouled on the shot. Thompson made his first free throw to tie the game. He missed the second one, but Jackson-Davis got the offensive rebound and putback to give the Hoosiers a two-point advantage. Minnesota missed a 3-pointer on the other end on a night it hit just 5-of-24. Kopp made sure Indiana fell on the right side of the 50-50 ball, diving to grab the rebound and calling a timeout for the Hoosiers to retain possession.

From there, Trey Galloway was fouled and hit both his free throws and Jackson-Davis blocked another Minnesota shot for good measure to seal the deal.

There’s plenty to nitpick in this one. Tamar Bates and Hood-Schifino’s shot selection was poor. They finished a combined 2-of-10. Galloway made just one basket in 30 minutes of action. Indiana scored only .94 points per possession against the second-worst defense in the conference, one down several players.

“We just couldn’t get in synch,” Jackson-Davis said to Robbie Hummel on the Big Ten Network broadcast post-game. “Overall, we grinded it out.”

It was ugly. It teetered on the brink of disaster. But Indiana got the W on the road in the Big Ten. It’s now four straight wins. They can’t all be a masterpiece.