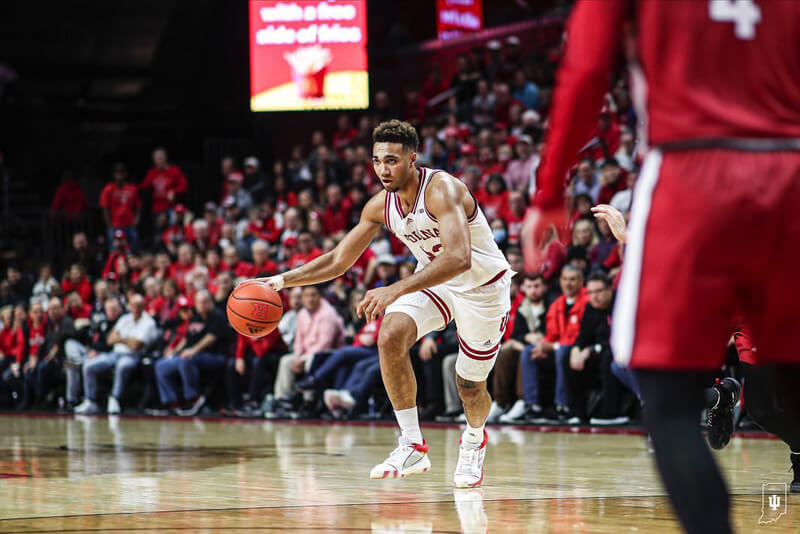 Thoughts on a 63-48 loss to the Scarlet Knights:

Another ranked team bites the dust at the former RAC.

The problem for the Hoosiers today, though, wasn’t so much that they lost. It’s how it happened. Rutgers absolutely took them out of their game. Indiana was on its heels all afternoon. IU looked lost.

“They were tougher than us tonight,” Mike Woodson said after the game. “Without a doubt.”

Indiana’s big strength this season has been its ability to dominate the points-in-the-paint battle, scoring efficiently while doing it. That was not the case today.

Indiana scored only four points in the paint over the first 20 minutes. Trayce Jackson-Davis had just one bucket, a goaltended look near the end of the half. Rutgers threw man and zone at Indiana and when Jackson-Davis had the ball, the Scarlet Knights swarmed him, making him give it up. If not for Miller Kopp (13 points on 5-of-7 shooting), Indiana’s halftime deficit of seven points could have been worse.

It looked like Indiana was going to make a game of it in the second half, grabbing the lead at 37-35 with 13:13 to go after another Kopp bucket. But the wheels fell off from there. Rutgers went on a 17-0 run and that was pretty much the ball game. As the second half wore on, Indiana looked frustrated and beaten down. There were a couple of physical dustups between the teams. And Rutgers’ mixing of defense and ability to keep Indiana from scoring down low (14 points) and on the fastbreak (three points) didn’t give Indiana many other options on offense. One option it did have, due to all the defensive pressure on Jackson-Davis, was the 3-ball. Rutgers dared the likes of Jordan Geronimo and Race Thompson to fire from deep. The results weren’t pretty.

Outside of Kopp (5-of-9), Indiana shot a woeful 1-of-16 from deep. Xavier Johnson accounted for the only other make. Johnson has helped steady this team when needed this season, but he shot just 2-of-11 from the floor and had six turnovers against four assists. Rutgers was physical with him all over the floor and he had trouble finding any comfort.

Looking for answers in the second half, Woodson brought in CJ Gunn, who promptly turned the ball over. It was just one of those days. Jalen Hood-Schifino sat out today’s contest due to a back injury. With all the pressure Rutgers put on the ball today, his presence would have helped.

But you wonder if it could have overcome Indiana’s effort and energy today. This was a miserable, forgettable game for Indiana, the type of effort fans had hoped this group had put in the rear-view mirror.

The Hoosiers get Nebraska this week at home for a bit of a palette cleanse. But then it’s time for the big boys with Arizona on deck and Kansas in the hole.

If Indiana lets any of this lack of toughness linger against those squads, expect even worse results than today.