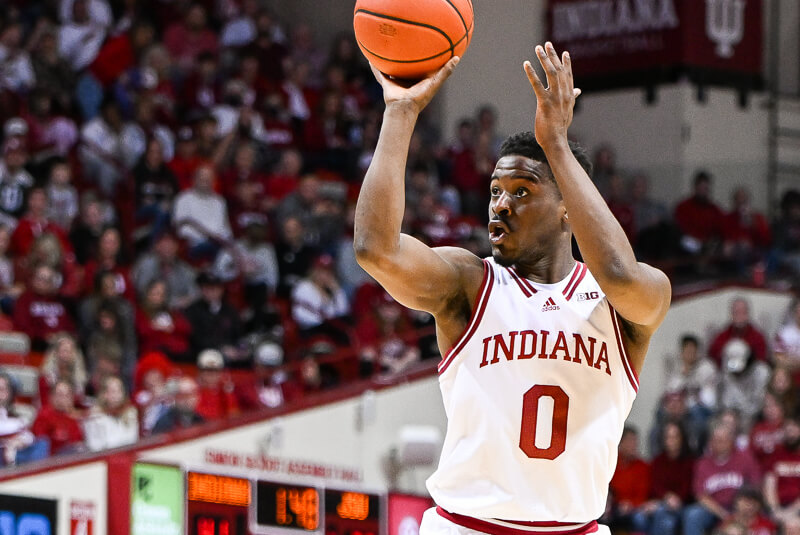 Indiana improved to 6-0 with an easy 90-51 win over Jackson State on Friday afternoon at Assembly Hall.

Here are five takeaways from the win over the Tigers:

Indiana’s bench had its best performance of the young season on Friday afternoon. The IU reserves scored more than half of the team’s points, accounting for 49 of the team’s 90 points.

Tamar Bates led the way with 22 points, a career-high scoring output for the sophomore.

But it wasn’t just Bates making a scoring impact off the bench. Malik Reneau had eight points, Logan Duncomb and Jordan Geronimo each had six points, Kaleb Banks had five and CJ Gunn chipped in two points.

“When we’ve had games like this, our bench has been phenomenal in terms of being able to do the things that we’ve taught them and follow the game plan,” Mike Woodson said postgame. “So for me from a coaching standpoint, I’m not afraid to play anybody off our bench. I mean, I’ve felt good about that all season.”

After surrendering .91 points per possession in Wednesday’s win over Little Rock, Indiana’s defense was much more sound against Jackson State.

The Hoosiers held Jackson State to 51 points and only .72 points per possession at Assembly Hall.

The Tigers had just put up 68 points and .94 points per possession in a loss at Michigan on Wednesday in Ann Arbor.

Through the first six games, Indiana is allowing just .895 points per possession and its opponents are shooting only 41.8 percent on 2s.

Fourth-year forward Trayce Jackson-Davis was back in the Indiana starting lineup after missing Wednesday’s game against Little Rock with a sore back.

Jackson-Davis played only 19 minutes, but wasn’t as dominant as usual. The Center Grove product finished with 11 points on 4-of-5 shooting.

“He didn’t play a lot of minutes today. We’ll go back and assess where he is,” Woodson said postgame of Jackson-Davis. “You know, he has these next few days to get ready for Wednesday’s game.

“So like I told him when I broke the huddle, you guys that are a little beat up, you’ve got to get in and get treatment and get yourselves ready for Wednesday because that’s our next game.”

Wednesday’s game, of course, is against North Carolina. The matchup has lost a little luster with North Carolina’s loss to Iowa State on Saturday, but the Hoosiers will still need a healthier Jackson-Davis to contend with Armando Bacot and the Tar Heels.

Indiana freshman Jalen Hood-Schifino entered the season with major expectations, but continues to shoot the ball poorly through six games.

On Wednesday, Hood-Schifino was 1-for-8 from the floor and finished with four points in 28 minutes.

Hood-Schifino did have six assists compared to just two turnovers on Friday, but his overall shooting numbers are underwhelming thus far.

Among Indiana’s regulars, he has the lowest offensive rating on the roster.

Xavier Johnson looks to be in midseason form

In Friday’s postgame press conference, Woodson said “I didn’t know where X was” the first few games of the season.

Johnson had just 11 points, five rebounds and nine assists through Indiana’s first two games, but has been much better over the last four games.

A 23-point performance at Xavier helped to get Johnson going and he’s continued to play well since.

On Friday, Johnson had 16 points, four assists and only one turnover in 24 minutes. He shot 6-for-11 from the field, including a 4-for-8 performance from distance. Johnson is shooting 66.7 percent on 3s this season in 12 attempts.

“I thought he had a wonderful floor game against Little Rock and then tonight he made shots and he ran our offense and got the ball where it needed to go and defended,” Woodson said. “So I can’t ask for much more than what he has done. So he just has to keep it going. We need him as a senior to run our team and get us where we need to go.”