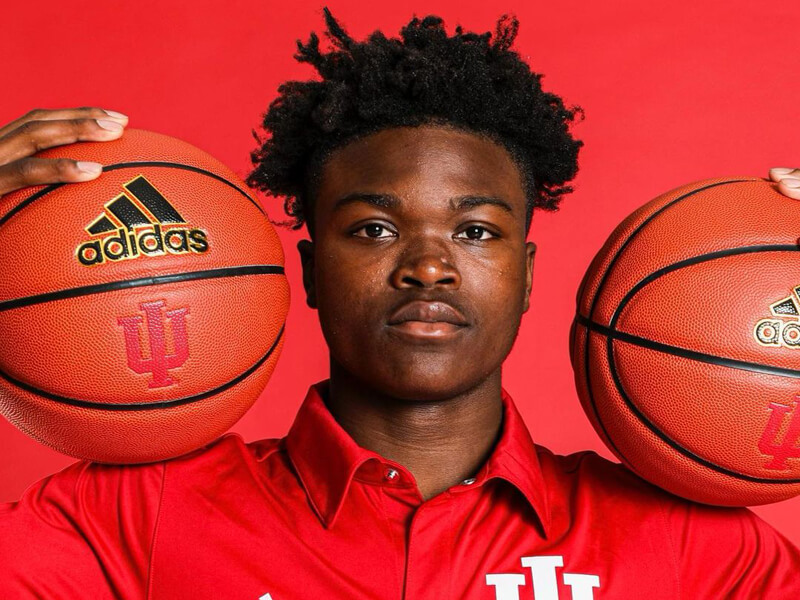 Indiana hosted priority recruit Rakease Passmore over the weekend for an official visit.

Passmore, a class of 2024 guard from Combine Academy (NC), is the No. 47 prospect nationally according to the 247Composite.

Inside the Hall spoke with AJ Jones, an assistant coach and the recruiting director at Combine Academy, to recap Passmore’s official visit to Bloomington.

Indiana offered Rakease a scholarship recently. How hard are they pursuing him at this point?

AJ Jones: “I would say just about as hard as you could expect for somebody they say is a priority for them. They’re in constant communication with Rakease, with myself, with our head coach and with his family. I would say they’re pushing pretty hard for him for my perspective and he feels good about the relationship that they’ve been building. They’ve been pretty consistent about building upon that.”

Who is leading the recruitment from an assistant coaching perspective?

AJ Jones: “It’s Kenya Hunter. He’s the lead on it it. They all saw him over the summer with his AAU program, Garner Road, and got a chance to evaluate him because they had a kid that they had already offered on the same team, which was Paul McNeil. So that’s when they first saw him. They really kind of picked up the heat once the fall recruiting period started. They came out to see him at Combine and that was where it got really heated up and they started pursuing him and offered him. When they first came down, it was both Kenya and Yasir (Rosemond). We talk to both coaches pretty regularly.”

What were his main takeaways from the visit and what stood out?

AJ Jones: “I think he was pleasantly surprised with Bloomington. I don’t think we came in thinking that Bloomington was going to be as nice as it is, I guess. Not only from a physical standpoint but also from the buzz that they have in the city as well. So I think he was surprised with that, pleasantly. The buildings and the facilities are top-notch, so I know he loved that. He felt like they had everything that you could potentially look for or need from the basketball facilities. But I think the No. 1 thing that he took away from it was just the people. The energy, the positivity, everyone there has the same positive, high energy type attitude. And a lot of positivity and they’re really excited about where the program is going. There’s always something to be said for getting to spend time with a legend like Mike Woodson who has been in the league for so long and being able to get a lot from that. So I know his highlight of the visit and the tour was the time that we got to spend with the coaching staff. That was dope for him.”

How impactful is Mike Woodson’s NBA experience for recruiting?

AJ Jones: “Extremely. Extremely. Because if you’re recruiting guys that feel like that’s their goal, to get to the NBA, and they not only feel like that, but actually talk to enough people to know that they have a legitimate opportunity to do that or that’s something they could work towards, then it’s extremely important I think… because it adds a value that you can hardly compare across the board. I think he’s got 34 years of experience at the NBA level. He’s able to speak about what it takes to play at that level in a way that most other people wouldn’t be able to do. I definitely think it makes a huge impact to have that level of experience there.”

Which other schools have prioritized and recruited him hard? Where else has he visited?

AJ Jones: “That’s his first official visit, actually. So that was really cool. He’s done unofficial at Wake Forest, Tennessee, places like that. As far as other schools that are making the biggest push for him, I would say you’ve got Oregon, Auburn, Tennessee, LSU and since the visit Ohio State has tried to heat up things a little bit more. He talks to the coaching staff at Duke pretty regularly as well. So he’s got some good traction and good recruiting going his way. Everybody is just watching how he progresses continually through the school season as well and are focused on their own seasons also. I would say those are the main schools, so to speak.”

What makes him so attractive as a prospect at the college level?

AJ Jones: He’s got God given abilities that can’t be taught. And I think that’s always extremely valuable when you’re talking about a kid’s ceiling. He’s a quick twitch, high motor super elite athlete. And you can’t teach those things. And the other thing is just his work ethic. Because the things that you can teach, he’s going to pick up on extremely quickly. He’s only been playing ball now for almost four years. So for him to be at the level he’s at right now with that little amount of time playing the game, time can only tell how far he can go. But I think that’s the most appealing thing. He brings a level of athleticism that and explosiveness to any team that can be valuable on both ends of the court. But then when you add in the fact that he’s now a high level jump shooter as well, it just really opens up the game for him and makes him a versatile piece that any team can work with to help them win games and championships.