Expectations for Indiana men’s basketball are high, but that doesn’t mean the team is thinking about them 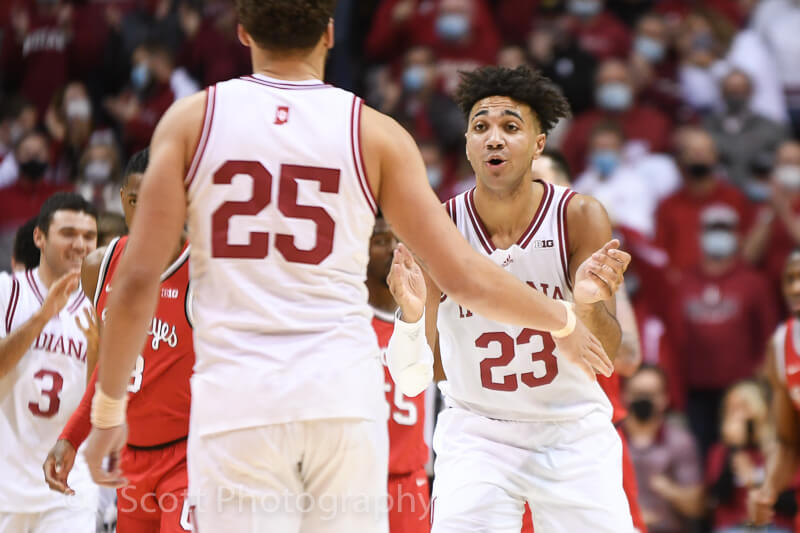 Indiana men’s basketball’s media day on Thursday was just about what everyone expected it would be. Mike Woodson answered questions about this season’s schedule, Trayce Jackson-Davis’ legacy, Xavier Johnson and more.

One of the things that stuck out? Woodson’s approach to the high expectations for this year’s team — expectations Woodson himself has placed on his players and those from a national perspective.

“The program is built that way, and it should be that way,” Woodson said. “I’m not going to run from it, and I’m not going to let my players run from it. There’s a lot of big things that’s got to happen this year for our ballclub, and I’m going to try to coach them up and push them in that direction.”

Indiana is currently the highest ranked Big Ten team on Bart Torvik’s preseason rankings, at 11th. On ESPN’s Way too Early Top 25 Rankings from August 23, Indiana sits at 15th, sandwiched between Villanova and Arizona — two teams who advanced to the Sweet 16 and Final Four last year.

It’s safe to say all eyes are on the Hoosiers. But when the players look in the mirror, are they thinking the same as everyone else?

The answer, for the most part, is no.

As a freshman, Reneau joins an Indiana basketball team with players who haven’t been ranked in their college career. It would be foolish to expect the players to completely ignore the positive attention after seeing the flip side in previous years.

“Just coming in here my freshman year and not having really any expectations, even sophomore year, and then junior year just having a new team, finally coming in here to this historic program and having an expectation to do something big is huge,” senior forward Trayce Jackson-Davis said.

For the Hoosiers, there also seems to be a difference between recognizing their potential as a team, backed up by the current projections, and using those numbers as a driving force.

Rather than being solely motivated by the numbers and hype, Indiana is motivated by each other and the past. Making it to the NCAA tournament last year gave the team a taste of what the Big Dance was.

Trayce Jackson-Davis wants to cement his legacy with banners and titles. Mike Woodson wants the same. That’s no secret, and both said as much.

“I’m not going to push the team in any other direction,” Woodson said. “If they’re scared of that challenge, they shouldn’t be here.”

There’s no doubt the team is motivated by expectations, and that’s not something to shy away from. However, the mindset of moving past the numbers and the projections and focusing on just playing the game is very prevalent.

“Rankings are what they are,” Woodson said. “You’ve still got to play the game, my man. That’s what’s important, what happens between those two lines.”

Woodson emphasized the need to prepare his players to play at the level that allows them to win every game they play, no matter what. Of course, he has goals for Big Ten and national titles down the line. But to get there, the team has to actually play well consistently.

“We’ve got to go out and do it on the floor and show that we can win a Big Ten title and a national title,” Woodson said. “That’s all I’m concerned about right now. The only way to do that is to get better each and every day in practice, and when we step on the floor, we’re playing at a high level.”

The players also know the rankings aren’t everything, and they can’t hang their hats on any numbers, especially in the preseason.

“We’re trying not to worry about that too much, trying to ignore it because, I mean, it means nothing,” sophomore center Logan Duncomb said. “Last year, Michigan was number one preseason in the Big Ten, and they sort of struggled.”

Michigan finished eighth in the Big Ten last season — one spot above Indiana.

The key is to recognize the bulk of the projections for what they are: words and numbers with nothing to back them up.

“It’s just kind of like keep doing what we’re doing, heads down,” Duncomb said. “We’re nothing until we prove it.”