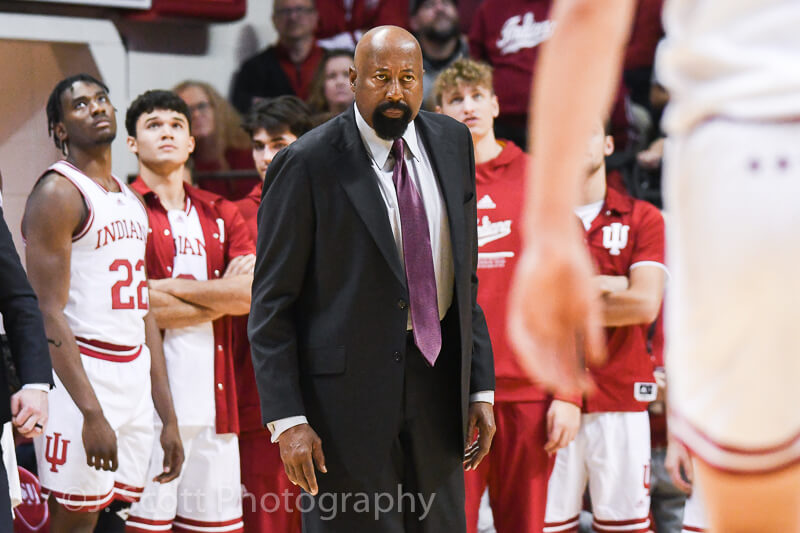 There’s no way Indiana can run from the expectations it has this upcoming season.

The clear message from Mike Woodson and his players was that the Hoosiers are going to have to step up to the occasion. Indiana – a team that is predicted by almost every media outlet to win the Big Ten – doesn’t have any other choice.

“I know expectations are high. I get that. That’s a good thing,” IU coach Mike Woodson said at Thursday’s media day in Assembly Hall. “But we’ve got to go out and do it on the floor and show that we can win a Big Ten title and a national title. That’s all I’m concerned about right now.”

At media day, it seemed like Indiana had a strong sense of camaraderie just a few days ahead of the official start of practice. They have something holding them together. While it might be as simple as the common goal of winning a conference championship and national championship, the optimism around the program looked contagious on the players’ faces. Especially the freshmen.

From Indiana’s improved front-court depth to the talented freshmen, Indiana looks primed to take the preseason hype head on, which isn’t something Indiana has done in recent years.

Trayce Jackson-Davis mentioned sophomore Logan Duncomb as a teammate who has really emerged over the course of the summer and a player with the potential to expand IU’s depth.

“Logan is playing at a really high level right now,” Jackson-Davis explained. “He’s rebounding the ball and he’s defending really well, especially just playing against me, and I’m just seeing it on the floor when I’m playing against him.”

Jackson-Davis even mentioned how he would be playing some at the four this upcoming season with Duncomb and freshman Malik Reneau potentially logging some minutes at the five. Race Thompson thinks Duncomb’s bringing a completely different attitude this year.

“I think that he’ll be able to help us out this year,” Thompson said. “He’s different than he was last year. You can see it on the court. I mean, he’s smiling, he’s playing hard, he’s talking trash. It’s a lot of fun to watch him grow and get better overall.”

Duncomb came into the 2021-22 season as someone who fans didn’t expect to see much of on the floor with experienced upperclassmen ahead of him in the rotation. That proved to be the case as Duncomb struggled when facing bigger opponents, causing him to get pushed around in the paint. His body just wasn’t Big Ten ready. Duncomb responded this offseason by changing his body.

“From last season to this year, I’ve gained like 40 pounds. So, just being stronger and being able to hold my own; I can feel it in practice against guys like Trayce (Jackson-Davis),” Duncomb said. “Before, I could get pushed out sometimes and wasn’t really able to bash in there, but now I feel like I can bash in there.”

Duncomb, a top-100 recruit in the 2021 class, only scored six points all of last season.

But Indiana is hoping that the emergence of Duncomb, the addition of five-star freshman Malik Reneau and the continued development of Jordan Geronimo can lessen the load on Jackson-Davis and Race Thompson up front.

Reneau got emotional when talking about his high school – and now college – teammate Jalen Hood-Schifino.

“Me and Jalen have been through a lot… after GEICO (national championships) when we won, we came in and we hugged each other, that’s when I knew I was coming to Indiana. I never told him that before,” Reneau said with a shake in his voice. “Just knowing that I’ve got my brother next to me was a big factor.”

Reneau and Hood-Schifino played together at Montverde Academy and won a national championship in April. Clearly, their bond has been and will continue to be strong during their time at IU. But, other freshmen Kaleb Banks and CJ Gunn have also grown close to the pair of Montverde teammates.

Reneau mentioned how the four of them play NBA 2K and Madden. Reneau, of course, thinks he’s the best at 2K.

“CJ (Gunn) is actually pretty good. I played him for the first time yesterday… I’m probably the best,” Reneau said. “It’s big trash talking when we start playing 2k and stuff like that. I think that’s where we let all our emotions out. You know? Yelling at each other, it’s friendly love.”

When they aren’t playing in practice, playing video games and hanging out in their dorms, the group has gone bowling with some of the upperclassmen.

Malik Reneau thinks Xavier Johnson and Tamar Bates are the best bowlers on the team and Gunn said Thursday that going bowling with his teammates was his favorite activity in Bloomington so far.

“Those are my brothers now, I see them all day, every day,” Gunn said. “We all live together so I see them more than everybody else.”

Some of the freshmen might not see the court that much this season, but they will make the most of their time at IU and hope to spread trust and friendship to the rest of their teammates.