Bench depth, players to watch and other news from IU women’s basketball at media day 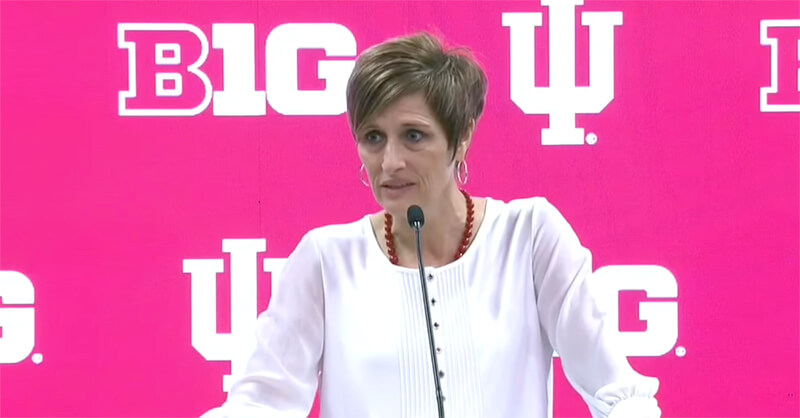 Displayed proudly and prominently, those banners could be considered the pride and joy of Assembly Hall. They paint a nice picture behind Moren, but there’s one issue: none of them are for the women’s team.

For the nine years Moren has been at Indiana, the goal of putting up one of those banners herself has never gone away. The past two seasons were the closest the Hoosiers got to achieving that goal.

An Elite Eight appearance in 2020 and a Sweet Sixteen appearance in 2021 put Indiana in the middle of national conversations and brought a great deal of attention, as well as expectations, to the team.

This season, Indiana’s sights remain set on winning titles. However, the way they approach those goals will look different than what Hoosier fans became used to in the last two seasons.

“A year ago, we had all the right pieces,” Moren said during Indiana’s media day on Thursday. “Now, we have to figure out how to combine the seven holdovers with the seven new faces.”

Despite losing key defensive players like guard Nicole Cardaño-Hillary and forward Aleksa Gulbe, not to mention stalwart guard Ali Patberg, Moren remains confident Indiana still has “all the pieces” to work toward the same level of success the program is used to.

“We’ve always been a program that’s wanted to be able to have a lot of pieces — different kinds of pieces — on the floor,” Moren said. “Last year it didn’t lend itself to that, but with the combination of the four freshmen but also the transfers… we welcome the idea of being able to have depth and we’re excited about that.”

Last season, Moren seemed to hang her hat on using a consistent group of five for almost all 40 minutes of every game. There was little consistent action off the bench when all five starters were healthy — the exception came when Mackenzie Holmes sustained a leg injury that kept her out for over a month.

While the Hoosiers still have “workhorses”, as Moren put it, who are capable of playing the entire game, they may not have to. The four freshmen on the team obviously are inexperienced in the ways of NCAA basketball, but that doesn’t mean they, and anyone else on the bench, won’t be called upon.

“The only way to get experience is by playing, I’ve realized that,” Moren said. “I do think there is going to be a moment where you’ll probably see us use our depth more than we did a year ago.”

One freshman who seems primed to get that experience early on is guard Yarden Garzon, one of Indiana’s most highly-touted newcomers. Garzon, a 4-star recruit per Premier Basketball Report, has the possibility to be a big contributor on both ends of the court.

“She has a natural instinct, she’ll do stuff that we don’t necessarily practice,” Moren said of Garzon. “She is just a natural basketball player. I do think that she has an opportunity to be a very special player.”

Team chemistry one of the deciding factors to success

With the wealth of talent and the good amount of experience the Hoosiers have on their team, one of the key factors to their success will be chemistry and relationships among the team.

But if media day was any indication, that won’t be a big concern. After guards Chloe Moore-McNeil and Sydney Parrish finished speaking with the media on Thursday, cheers from their teammates watching echoed throughout Assembly Hall.

Team bonding events and practices over the summer have allowed seven strangers to get to know each other and the rest of the team. Seniors are taking the freshmen under their wings, and the past has shown the culture surrounding the program breeds teammates who will always cheer each other on.

The rise of Chloe Moore-McNeil

Entering her sophomore year in 2021, Moore-McNeil was a name few outside the die-hard Indiana women’s basketball fans knew well. She saw relatively consistent action off the bench, but wasn’t a top-level contributor. That trend seemed on pace to continue until the middle of the 2021-22 season.

As Indiana suffered a two-week pause due to COVID-19, Moore-McNeil took the time to work on her game, and a switch flipped. For just about the rest of the season, she was the first contributor off the bench. She played more confidently, guarding strong around the perimeter and taking — and making — more shots.

“It really made me understand I needed to grow up a little bit and give a little more,” Moore-McNeil said.

Now, still under the radar, she seems to have earned herself a starting position.

“Y’all gotta watch that girl,” forward Kiandra Browne said. “I think that this year is going to be her breakout year and I’m really excited for her.”

Moren had similar sentiments, citing Moore-McNeil’s growth in shooting from beyond the arc and increasing her overall strength. Last year, Moore-McNeil shot 3-pointers at a 31 percent clip, and had six games where she made at least two triples.

Defensively, the 2021-22 season saw her matched up against top shooters like Iowa’s Caitlin Clark and other perimeter players. Moore-McNeil said one of her biggest goals this season is to improve her one-on-one defending. If she is successful in doing so, she’s primed to be one of Indiana’s biggest contributors.

“She wants to come in and do what she can do to help her team win,” Moren said. “A kid like Chloe, who has spent time on the bench, who has spent time in every practice just trying to get a little bit better every day, now she’s to a point where she has that opportunity in front of her — not only to start, but play big minutes for us.”