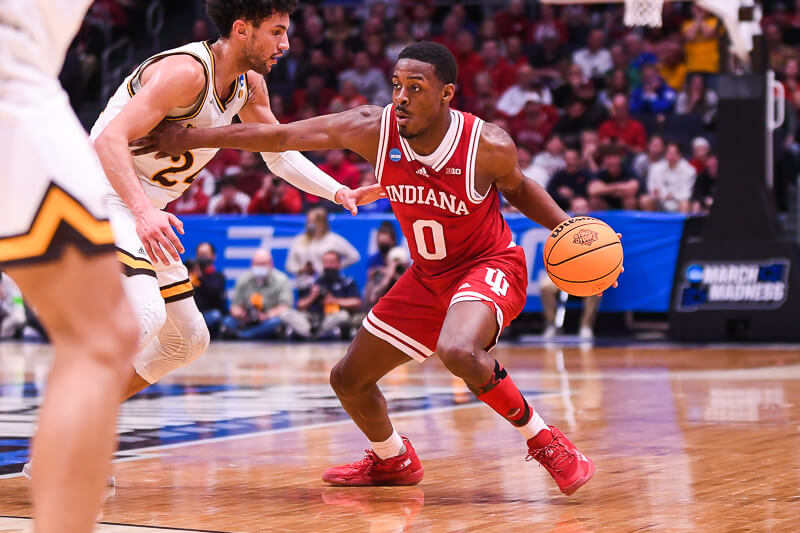 Indiana’s 2022-23 roster was officially released last week and the Hoosiers have 17 players who will don the candy stripes next winter.

The roster features four scholarship newcomers, a new walk-on and a new assistant coach. Several early projections for the 2022-23 season have Indiana among the favorites for the Big Ten title.

Here are four thoughts on the 2022-23 Indiana basketball roster:

Most of the Big Ten will be looking to replace frontcourt production next season. Among the notable departures from the league: Kofi Cockburn, John Harrar, EJ Liddell, Keegan Murray, Trevion Williams, Moussa Diabate, Marcus Bingham Jr. and possibly Pete Nance, who is in the transfer portal.

Purdue will return Zach Edey and Michigan retained Hunter Dickinson, but Indiana is the only Big Ten program that retained all of its significant frontcourt pieces.

Race Thompson, who averaged 11.1 points and 7.5 rebounds per game last season, is back. As is Jordan Geronimo, who looks ready to breakout in his third season. Adding to the frontcourt depth is Malik Reneau, a 6-foot-9, 235 pound forward from Montverde Academy who signed with the Hoosiers after a coaching change at Florida. Indiana also has Logan Duncomb, a four-star recruit in the 2021 class, for additional depth at the center position and Georgia native Kaleb Banks arriving as a potential contributor at the three or the four.

With three proven contributors returning  – including a potential all-Big Ten first team producer in Jackson-Davis – the Hoosiers have the most frontcourt depth in the Big Ten as the summer approaches.

The Hoosiers return the most production from last season in the Big Ten. But did Mike Woodson and the coaching staff do enough to address the most pressing issue on the roster?

Indiana finished with the nation’s 95th best offense last season and its lack of perimeter shooting was a major deficiency. The Hoosiers ranked 200th nationally in 3-point shooting percentage, 233rd in free throw shooting percentage and 324th in point distribution from 3-pointers.

The best 3-point shooter on the roster in terms of makes and percentage – Parker Stewart – left via the transfer portal. Only two returnees shot better than 36 percent from distance in Xavier Johnson and Miller Kopp. Of the newcomers, only Lawrence North product CJ Gunn is known as a potent threat from the perimeter.

Until Indiana proves that it has corrected the one constant deficiency it has had since Tom Crean departed in 2017, expectations for its offense as a whole should remain tempered.

Defense on track to remain among the league’s best

Indiana finished 24th last season in adjusted defensive efficiency (per KenPom) and had the best defense in the conference at 1.008 points per possession allowed.

The only notable defensive presence the Hoosiers lost in the offseason was Rob Phinisee, who transferred to Cincinnati after missing 10 games last season due to various injuries.

The continuity with the roster along with another offseason for Woodson to improve the defense should have Indiana in the mix to put a top 25 defense on the floor again next winter.

“Defense is what won us a lot of games last season,” Woodson said last month at Huber’s Winery in Borden. “And I’ll never get away from that.”

The backcourt should be improved

The Hoosiers retained point guard Xavier Johnson, who scored in double figures in each of the final 10 games last season and looked like an all-Big Ten performer in the conference tournament.

Miller Kopp, who is entering his fifth year and is among the most experienced players in the Big Ten, is also back and should be hungry to finish on a high note after going scoreless in IU’s NCAA tournament loss to Saint Mary’s.

Trey Galloway, who struggled to stay healthy last season, also returns, as does Tamar Bates, a former five-star recruit who was underwhelming offensively last season. Anthony Leal, the state’s Mr. Basketball in 2020, is back but will need to shoot much better from the perimeter to earn steady minutes.

Johnson is a surefire starter and it won’t be surprising if he’s joined in the backcourt by Jalen Hood-Schifino, the highest-ranked incoming recruit in the conference. Hood-Schifino, who measured in at 6-foot-6 and 215 pounds, is a combo guard with a college-ready body. And while he’s the lowest-ranked of the newcomers, Gunn, who was recently named the MVP of the Indiana-Kentucky all-star series, could also figure into the mix.

A healthy mix of returnees and newcomers should create fierce competition for minutes and fewer occasions where Woodson searches the bench for reliable contributors who aren’t there.