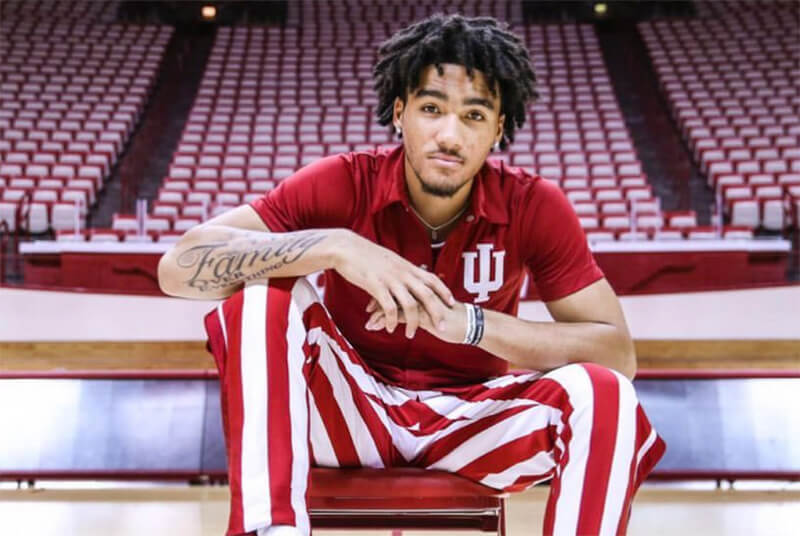 Thirteen pounds. That’s how many much weight Jalen Hood-Schifino lost during a period of time last summer due to getting COVID-19, according to his mother Angel Schifino. Jalen was down emotionally and physically, Angel Schifino said. His time playing at the 2021 Nike EYBL Peach Jam was cut short and he missed another basketball camp, too. What’s revealing, though, is what Jalen wanted to do as soon as he felt better.

“As soon as he got better, I mean, he wasn’t even excited that he was ready to eat again, he wanted to be right back in the gym,” Angel Schifino told Inside the Hall in August 2021 “… He wanted to go get tested, wanted that test to show that he was negative and he was already setting up appointments with his trainer.”

Among the ways of describing Jalen’s work ethic, Angel Schifino alluded to one of their favorite movies — The Sandlot. Near the beginning of the movie, one of the main characters, Scotty Smalls, along with his parents, are new to the neighborhood. During one scene, Smalls is told by his mother to go out into the fresh air and make some friends, among other things. Angel Schifino compared this scene to sometimes having to encourage Jalen to do activities outside of basketball.

Jalen is now preparing for his first season at IU. Jalen — rated a five-star prospect and ranked 22nd nationally in the 2022 class, according to the 247Sports Composite — already has an impressive basketball résumé. He won two GEICO High School Basketball Nationals titles (2021 and 2022) at Montverde Academy (Montverde, Florida) and played in the 2022 Jordan Brand Classic. This spring, Jalen spent some time training in California with professionals, including the Los Angeles Clippers’ Paul George. Jalen has the potential to be a key contributor for IU during the upcoming season.

“The kid just works and works and works,” Montverde Academy associate head coach Rae Miller said about Jalen. “…His work ethic is unquestionably one of the best ones we’ve had.”

Jalen initially committed to the University of Pittsburgh in December 2019. But in July 2020, he de-committed from Pittsburgh and reopened his recruitment. The following high school season, he began playing at Montverde Academy, where he spent his final two high school seasons. (He had previously played at Northside Christian Academy in Charlotte, North Carolina and then at Combine Academy in Lincolnton, North Carolina). In August 2021, early in his senior year at Montverde, Jalen committed to IU.

During Jalen’s senior season, right before the 2022 GEICO High School Basketball Nationals, he injured a finger on his shooting (right) hand. But he played through the pain during the tournament. He even reinjured it during the championship game, but continued to play through it and helped Montverde win another GEICO High School Basketball Nationals title. After the championship game, he went to a hospital.

“He just wouldn’t allow that (his injury) to deter him from playing and being effective,” Miller said. “It probably hurt him shooting the ball the most in that scenario, but he improvised and found other ways of creating opportunities for himself and his teammates, which was really good to see.”

It’s also important to understand who Jalen is as a person, too. Angel Schifino said Jalen is “a very mature kid,” “very neat” and “an old soul,” among other descriptions. One time, they were at a red light and there was a woman who wasn’t wearing any shoes. Her legs and feet were swollen. So Jalen went into the trunk and gave the woman a pair of his new Kobe’s. The woman cried.

“I just think like your character just goes a long way and that’ll take you far in life,” Angel Schifino told Inside the Hall in August 2021. “Because the ball will stop… As a mom, you know, you want your children to be happy and you just want them to — as citizens — just navigate through life being a good person. I just think that goes a long way.”

At IU, playing time has opened up in the backcourt for the 2022-23 season after guards Parker Stewart, Rob Phinisee and Khristian Lander all transferred to other programs. Jalen will likely compete with Xavier Johnson, Tamar Bates, Trey Galloway, Anthony Leal, CJ Gunn and Miller Kopp for playing time. (Perhaps Jordan Geronimo and Kaleb Banks, too, depending on the situations.) Jalen’s injured finger is now fully healed.

There are other aspects that make Jalen’s first season at IU even more intriguing. One is his physicality. Jalen is listed on IU’s roster at 6-foot-6 and 215 pounds. For someone his age, that is an extremely physically developed frame. Plus, he’s a two-way player who has the ability to create for himself — and others — on the offensive end. Jalen could potentially get play as the primary ball-handler for the Hoosiers. Jalen could also potentially play off of the ball. There’s a chance he could play a variety of roles at different points during a game/the season. Among the different lineup combinations, Jalen could potentially play alongside Xavier Johnson.

When asked what first stood out to Miller when he started working with Jalen, Miller’s answer seemed fitting.

“His toughness,” Miller said. “His toughness. His willingness to work. His unbelievable work ethic. He really enjoys, you know, strength and conditioning. He enjoyed having to grow. He enjoyed the process that was required of him to become the player that he’s become. And, you know, he came in (to Montverde Academy), he was not a guy that was about himself, he was about the team. And that was really, really important.”