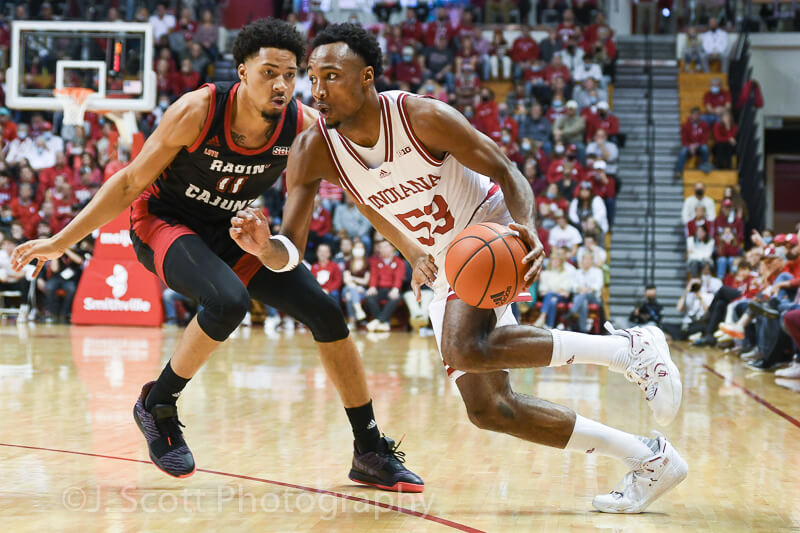 Expectations were high for Tamar Bates as he entered his freshman season at Indiana.

Earlier in his prep years, Bates was tabbed in the 100s of 247Sports’ recruiting rankings. But he eventually burst onto the national recruiting scene, rising in the perspective of evaluators as he transferred to IMG Academy for his senior season. He was ultimately ranked a four-star recruit and 30th in the 2021 class, according to 247Sports.

Initially, Bates committed to play at Texas. But in March 2021, Shaka Smart left Texas to take over the Marquette program. Bates then reopened his recruitment. Indiana was going through a transition of its own. Archie Miller was fired. Mike Woodson was hired. In April, Bates announced his commitment to IU, marking a major recruiting win for Woodson and his staff.

Those expectations eventually gave way to an up-and-down freshman season.

His performances during Indiana’s trip to the Bahamas, scoring 25 total points off the bench in two games, added to the early intrigue. It looked like Bates could be a consistent scoring threat off the bench.

In the third game of the 2021-22 season, Bates proved his potential. He scored 11 points in Indiana’s win against St. John’s and played during crunch time.

“He’s been playing well, man,” Woodson said after the game. “… He’s not scared of the moment. You need players like that.”

Woodson also noted after the game that Bates had been working back from injuries.

Regardless, Bates followed the St. John’s performance up with another double-digit scoring outing, posting 10 points against Louisiana. In Indiana’s conference opener against Nebraska, Bates scored 13 points.

After that game against Nebraska, though, Bates only scored in double-figures once for the remainder of the season. Bates missed Indiana’s Crossroads Classic matchup against Notre Dame to return home for a family funeral. In the month of January, Bates only played double-digit minutes in three games. Then, in Indiana’s February game against Northwestern, Bates was one of five IU players that sat out due to disciplinary reasons.

The remainder of the season was largely inconsistent — both in minutes played and production. Bates never seemed to fully get into a rhythm and produce at the level many hoped. There were flashes of potential, like his 13 points against Michigan State. But his defense and efficiency weren’t reliable on a consistent basis. In a five-game stretch — the final two games of the regular season and three games in the Big Ten Tournament — Bates played a total of 15 minutes, scoring just three points during that span, which also included a DNP.

Bottom Line: Despite his somewhat turbulent freshman season, Bates has the ability to be an important part of the future of the Indiana program. At 6-5, with plenty more room in his frame to get stronger, Bates has the archetype to be a lethal wing scorer. With Parker Stewart leaving IU and Rob Phinisee in the transfer portal, there will be more minutes available for Bates to take. However, he’ll have to compete for time on the court with Anthony Leal, Trey Galloway, Miller Kopp and incoming freshmen Jalen Hood-Schifino and CJ Gunn. With his first collegiate season under his belt, Bates taking a step significant step forward as a sophomore wouldn’t be a surprise. There were enough moments of potential to indicate breakout candidate potential next season.

Quotable: “I feel like it was a humbling experience for me … Not getting too rattled at all and not being shaken up by the so-called slump … Knowing that it’s hills and valleys on this journey I’m taking… Just continuing to put the work in.” — Bates ahead of Indiana’s home matchup against Wisconsin in February.