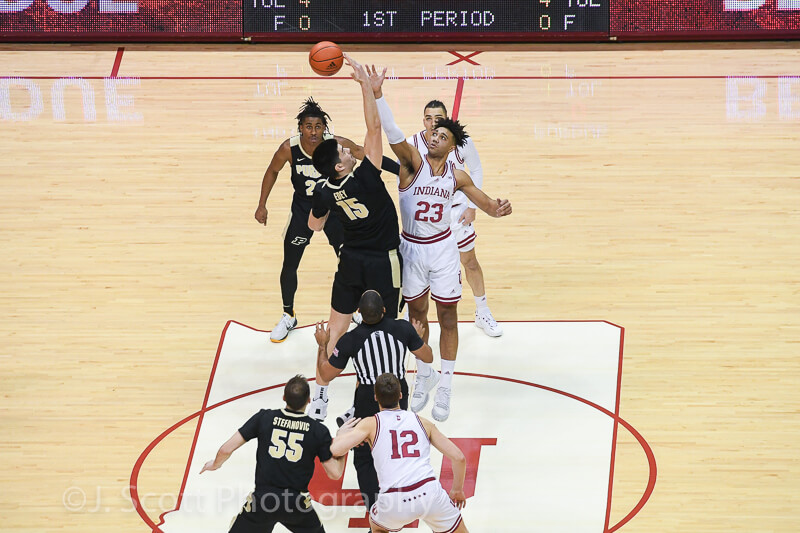 Indiana will close out the regular season on Saturday afternoon against Purdue at Mackey Arena. The Hoosiers won the first matchup in Bloomington 68-65 back on Jan. 20.

The Boilermakers are 24-6 overall and 13-6 in Big Ten play, but have lost their last two games. Saturday’s game will tip at 2 p.m. ET on ESPN:

Indiana’s disappointing 66-63 loss to Rutgers on Wednesday has the program currently on track to miss the NCAA tournament again.

After starting the season 16-5, Indiana is now 2-6 over its last eight games and has fallen out of the tournament field in most projections. Saturday marks a huge opportunity for Indiana to pick up a Quad 1 win, but Purdue has been excellent at Mackey Arena all season.

The Boilermakers are 15-1 at home this season and the environment will be raucous as Purdue looks to avenge its loss in Bloomington.

Indiana snapped a nine-game losing streak to Purdue thanks to some heroics from Rob Phinisee in Assembly Hall on Jan. 20.

The Hoosiers trailed 16-8 early, but the Lafayette native came off the bench and scored 17 first half points as Indiana opened up an 11-point lead late in the first half.

Purdue had 10 first half turnovers, shot 12-of-27 from the field and also had its most talented player, Jaden Ivey, pick up a flagrant one foul for shoving Trey Galloway to the floor.

The Boilermakers, however, had an answer in the second half as most teams do against Indiana. The Hoosiers led by nine at the half, but by the 16-minute mark, the lead had dwindled to one at 43-42.

Indiana couldn’t extend the lead past eight again and by the 3:36 mark, Ivey had tied the game at 63. The Boilermakers took the lead at 65-63 on a Mason Gillis with 1:08 to play. Phinisee’s 3-pointer from the right wing with 16.9 seconds to go gave Indiana the lead back at 66-65 and Trayce Jackson-Davis knocked in a pair of free throws with 5.1 to extend the lead to three. Ivey had a clean look from the right wing at the buzzer that just missed, which gave Indiana its biggest win of the season. 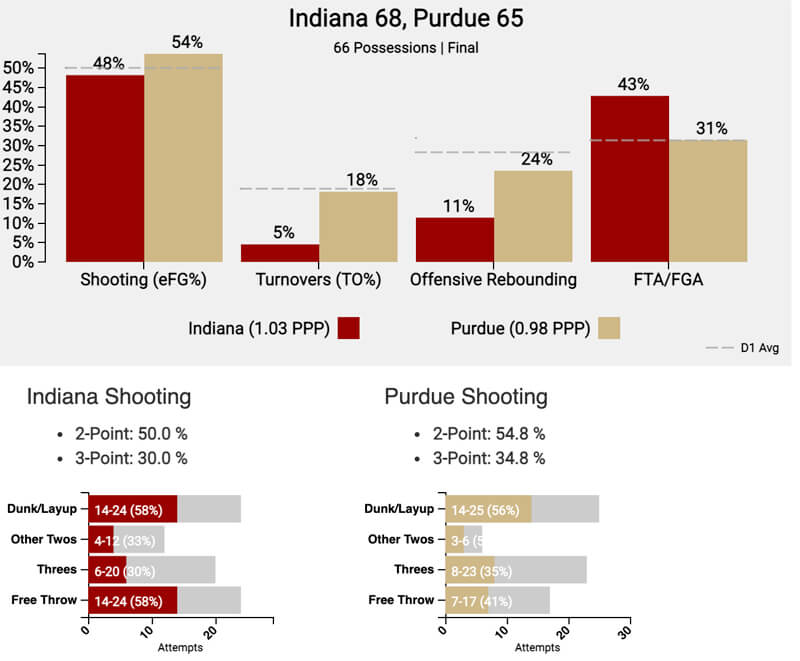 Indiana’s defensive performance in the first matchup was impressive. Purdue entered the game with the nation’s top offense in the country, but scored just .98 points per possession on Branch McCracken Court. At the time, it was Purdue’s worst offensive performance of the season. The Boilermakers have since had three lower outputs in terms of points per possession: at Michigan (.936), Maryland (.929) and Michigan State (.979).

Turnovers and free throws were a big reason Purdue’s offense struggled in the first matchup. The Boilermakers finished with a turnover percentage of 18.2 and shot only 7-of-17 from the free throw line.

There were also some individual performances from key Purdue players that were uncharacteristic. Sasha Stefanovic made just one of his 7 3-point attempts. Trevion Williams had just two points and committed four turnovers in 15 minutes.

For Indiana, it was impressive that the Hoosiers were able to earn a victory over a top 10 team with minimal production out of Trayce Jackson-Davis.

Jackson-Davis committed his second foul with 14:24 to go in the first half and with the Hoosiers trailing 16-8. Indiana then outscored Purdue 29-13 the rest of the half with Jackson-Davis on the bench.

A big reason for that, of course, was the play of Phinisee. Indiana’s backup point guard scored 17 of his team-high 20 points in the first half. He was 7-of-10 from the field in 13 first half minutes.

The overall production from the bench was extraordinary as the reserves outscored the starters 35-33. Galloway had eight points and Michael Durr had four in 24 minutes due to the foul trouble for Jackson-Davis.

(Stats are for conference games only. Numbers are through Thursday’s games.)

Purdue enters Saturday’s game with the Big Ten’s second-best offense and 10th-best defense. For the season, Purdue has the nation’s most efficient offense according to Ken Pomeroy’s adjusted efficiency ratings.

Purdue has been great at home all season and this will be the most intimidating environment Indiana has faced all season. The earlier season loss for Purdue in Bloomington will only ratchet up the intensity from the Mackey Arena faithful.

KenPom projects a 10-point win for Purdue with just a 19 percent chance for an IU upset. The Sagarin ratings favor Purdue by 8.5.

With Trey Galloway sidelined and no clear timetable for his return, the Ivey matchup is a major problem for Indiana. Galloway was able to do a pretty good job on Ivey in the first half of the first matchup, but Ivey’s second half performance was what got Purdue back into the game. If Galloway remains unavailable, Indiana has no good defensive matchup for the future lottery pick.

If Indiana can’t pull off the upset, the Hoosiers are going to need at least two wins next week in Indianapolis to get back into the NCAA tournament conversation.