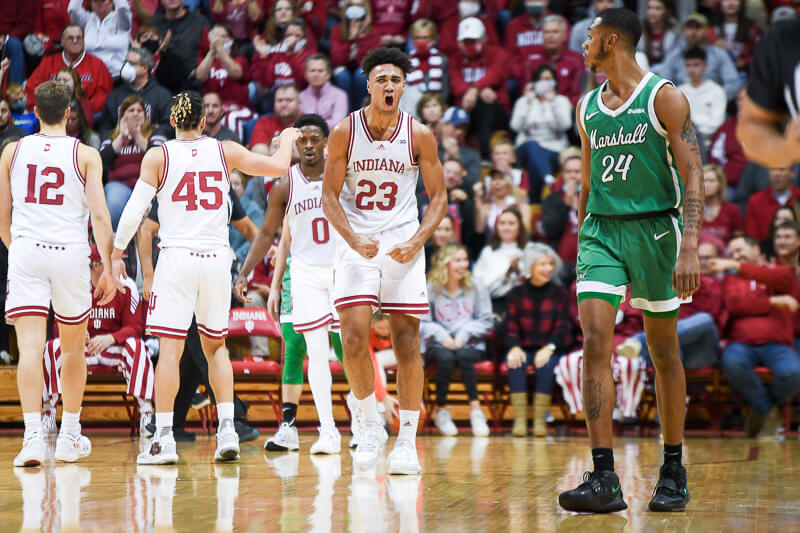 Following a historically chaotic weekend of college hoops, things have tightened up a bit in the race for one seeds, and at this point it feels like there are seven (maybe eight) teams in the mix.

Despite a loss at Saint Mary’s, Gonzaga remains the number one overall seed. The Zags remain atop all of the predictive metrics by a relatively wide margin, which was mentioned during the Selection Committee’s reveal on February 19th. They still have eight Quad 1 wins, including non-conference victories over Texas Tech, UCLA, and Texas.

Baylor was one of the only top teams to emerge victorious over the weekend, and Saturday’s victory over Kansas coupled with Monday’s win at Texas have propelled the Bears to second overall. Despite multiple injuries, Baylor continues to prove it can compete with anyone, and they lead the nation with 12 Quad 1 victories as well as a 17-5 mark in the top two quadrants. Big 12 counterpart Kansas is lurking close behind, as the Jayhawks are second in Q1 victories and are 16-5 in the top two quadrants. Three more Q1/Q2 games await as KU plays TCU twice before wrapping up the regular season at home against Texas.

Arizona still boasts strong quality metrics, but the resume metrics took a hit with Saturday’s loss at Colorado. The Wildcats do have 13 wins in the top two quadrants, but only about half of those are against teams in the at-large conversation. A road win at USC this week would bolster their case heading into the Pac-12 tournament.

Like the Big 12, the SEC also has two teams in the mix. Auburn has great resume metrics thanks to a 14-4 mark in the top two quadrants and 10 wins away from home, but they have fallen outside the top 10 of the NET. The Tigers swept Alabama and have home victories over Kentucky, LSU, and Murray State. Kentucky’s strength is its quality metrics, while its resume metrics lag a bit behind Auburn. Still, UK has 12 wins against Q1 and Q2 and no losses outside of Q1. The Wildcats are just 6-6 in road/neutral games, although they did win at a Kansas and Alabama.

Duke was among the biggest winners of the weekend, as losses by so many teams in front of them allowed the Blue Devils to get closer to the pack. Wins over Kentucky and Gonzaga will carry a lot of weight with the committee, but a down season for the ACC has provided limited opportunities to pick up marquee wins. Still, Duke is 11-3 in the top two quadrants with a 10-2 mark in road/neutral contests. However, losses at home to Virginia and on the road against Florida State don’t help matters, although it’s worth noting that both came by just one point. For now, the Devils need to close out the regular season with wins at Pitt and home against North Carolina, but they probably need to win the ACC tournament to finish with a top seed.

The other team in the mix is Purdue, who has a huge game coming up on Tuesday at Wisconsin. The Boilers are 7-4 in Q1 and 4-1 in Q2, including a neutral court win over Villanova and sweeps of Illinois and Iowa. They are 5-4 in true road games but 4-0 on neutral courts, while their resume and quality metrics tend to lag behind other competitors for a top seed.

Here’s a quick reminder about how the NCAA selection committee classifies wins based on the NET rating.

The projections below are based on all games played through February 28, 2022. Following the bracket, I included a few thoughts on the last four in and first four out.

Michigan – The metrics suggest the Wolverines are tournament-caliber, but their grip on a spot is precarious thanks to a 15-12 overall record. Historically, very few teams have made it while just three games over .500. Even though Michigan State did it last year, I tend to view that as an aberration given the odd circumstances of last season. Michigan does have six wins in the top two quadrants and just one “bad” loss. The Wolverines have a busy week ahead, which features home dates with Michigan State and Iowa followed by a road trip to Ohio State.

Memphis – The Tigers have now won eight of their last nine games, but Memphis’ overall profile is odd to say the least with three Quad 1 wins as well as four “bad” road losses by a total of nine points, two of which fall in Q3. Injuries and COVID-related absences have played a major factor as well, as four of their losses came with DeAndre Williams sidelined. Memphis has solid quality metrics and needs to avoid a bad loss at South Florida before a home game against Houston. A win there would give the Tigers a sweep of the Cougars as well as a little breathing room heading into the AAC tournament.

Indiana – After staving off a late flurry from Minnesota, the Hoosiers have moved inside the cutline. They now have three Q1 victories thanks to Notre Dame’s ascension into the top 50 of the NET, but they are just 6-10 in the top two quadrants. While they don’t have any Q3 or Q4 losses, a sub-300 non-conference strength of schedule certainly doesn’t help matters. The quality metrics are decent, but the results-based metrics are lagging a bit behind other bubble teams. Wednesday’s game against Rutgers is a huge one for bubble purposes, especially with a season-ending road trip to Purdue looming.

SMU – The Mustangs were unable to pull off a season sweep of Houston, and their 14-point loss has them right on the cutline heading into the final week of the regular season. A 6-5 mark in the top two quadrants is solid, but SMU has a loss in Q3 and another in Q4. The sweep of Memphis helps for bubble purposes, but they can ill afford to slip up during home games against Cincinnati and Tulane this week.

Rutgers – The Scarlet Knights lost twice last week, falling at Michigan and then at home against Wisconsin. They now have five Quad 1 victories, but they are hovering in the low 80s in the NET, which would be the lowest ever for an at-large team. A three-game November losing streak (at DePaul, vs. Lafayette, at UMass) accounts for three of Rutgers’ four worst losses with the Lafayette game falling in Quad 4. Still, Rutgers has a slew of solid home wins to go with a road win in Madison. Despite those great victories, Rutgers doesn’t boast great marks in the resume or quality metrics. Wednesday’s trip to Bloomington is a huge one for both teams.

VCU – The committee’s comments on taking injuries into account would seem to be good news for VCU, given that the Rams went just 4-4 in games without Ace Baldwin earlier this season. VCU’s resume metrics are strong, thanks in part to a 9-1 mark in true road games. However, just one of the Rams’ six Q1/Q2 victories have come against an at-large caliber team (at Davidson). They have a pair of key games this week, as the Rams will host St. Bonaventure before traveling to Saint Louis.

Loyola Chicago – An overtime loss at Northern Iowa bumped the Ramblers into the four seed in the Missouri Valley tournament.  They are just 5-6 in the top two quadrants with a neutral court victory over San Francisco their only win over a projected at-large team. Despite a NET in the low 30s, the results-based metrics aren’t particularly strong, and Loyola went just 2-4 against the top three teams in the MVC. The Ramblers need to get to the MVC Final at a minimum based on their profile.

BYU – The Cougars took care of business at home to close out the regular season, but there is still work to do. They have seven victories in the top two quadrants, including a few key wins against other bubble teams. That being said, BYU also has four losses against teams not in the at-large picture, including a Q4 loss to Pacific. Thanks in part to a poor BPI, the quality metrics aren’t particularly compelling, although to be fair the resume metrics don’t compare well to other bubble teams either. The Cougars do have nine road/neutral wins though, but they need to win their first WCC tournament game to set up a matchup with San Francisco in the Quarterfinals.