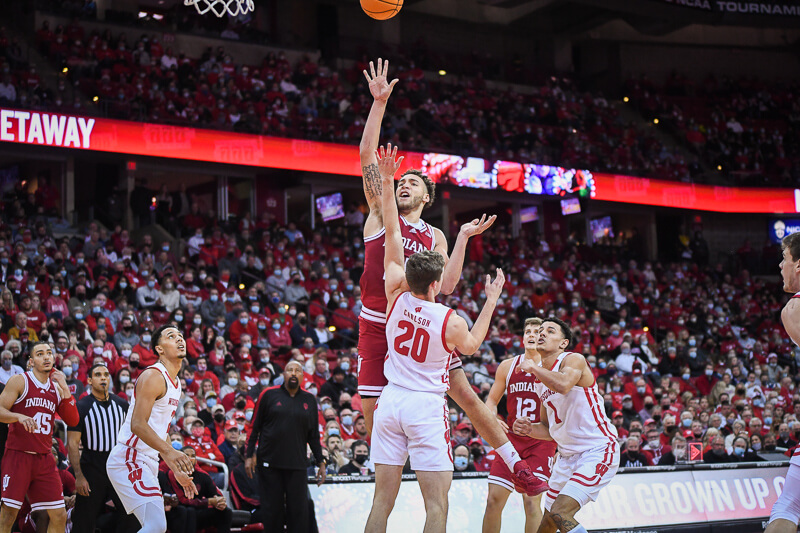 Indiana failed its second road test Wednesday night at the Kohl Center, falling 64-59 to Wisconsin to drop to 7-2 on the season.

The Hoosiers tried to snap a losing streak at the Kohl Center that dates back to Jan. 25, 1998 and their odds looked promising after they built up a 22-point lead in the first half. But like their 18 previous games at Wisconsin, the Hoosiers couldn’t get the job done.

Here are five takeaways from IU’s loss to the Badgers:

Indiana played one of its best halves of basketball so far this season to start out its game against Wisconsin. Everything seemed to click. Shots were falling, the defense was working and turnovers were minimal.

At one point, Indiana was shooting as high as 71 percent from 3-point range and finished the half at 17-of-31 from the field. The Hoosiers clamped down on defense, too, allowing just one three and a mere 31 percent shooting from the floor.

All of that combined led the Hoosiers to stretch the gap to as many as 22 points. But the problem, like the many Indiana teams that have come before, was it couldn’t hold that momentum up for two halves of basketball.

Mike Woodson said it felt like his team was in quicksand in the second half. After a 42-point first half, Indiana could only muster 17 points while also giving up 39 in the second half. It was a winnable game, according to Woodson, but a win required two halves of the same caliber of play.

“You’ve got to play the same way and that’s got to register,” Woodson said.

Although Xavier Johnson’s statline totaled 10 points, seven rebounds and seven assists, most all of that came in the first half.

His decision-making and ability to find the basket all changed in the second half, though. He shot only 1-of-10 from the field in the final 20 minutes.

Woodson said he has to learn by watching film to see when he has an opening and when he doesn’t because that’s what good point guards do.

“He struggled tonight,” Woodson said. “He was driving the ball in and trying to draw fouls and they weren’t giving him his calls. We’ve got to keep working with him.”

Johnson knew he struggled and owned up to his mistakes in the second half when he spoke with the media after the game.

Not enough looks for Trayce Jackson-Davis and Race Thompson

Among the many issues in the second half was Indiana’s inability to get the ball to go in the basket. Threes weren’t falling like they did in the beginning of the game and Woodson gave Wisconsin’s defense credit for that.

But the guards didn’t go down low to Trayce Jackson-Davis and Race Thompson as much as Woodson would’ve liked.

“I’ve got to find ways to get Trayce and Race more shots down low,” Woodson said. “He didn’t get enough shots.”

Jackson-Davis scored in single digits for the first time all season, recording just nine points. Thompson added 12 points, but the two bigs combined for just 10 shot attempts in the second half.

When the Hoosiers started to slip down the stretch, the instinct wasn’t to feed the post and Woodson said that’s got to change.

Free throws are still an issue

The Hoosiers are known for struggling at the line, but Indiana’s 46 percent free throw shooting Wednesday night proved to be a dagger in its five-point loss to Wisconsin.

Indiana missed seven free throws, and six of them came in the final 10 minutes of the game.

“We missed free throws coming down the homestretch and then we couldn’t get the critical stops we needed,” Woodson said.

Johnson took a trip to the free throw line for a one-and-one after Wisconsin’s Chucky Hepburn nailed two free throws to extend its lead to the three points. Down three with just 18 seconds left, Johnson missed the front end and Wisconsin got the rebound.

Hepburn went back to the line and made both to put the game out of reach.

Struggles finishing on the road

Wednesday night’s game showed flashes of Indiana’s loss to Syracuse last week when it came down to the final minutes. But against the Badgers, the Hoosiers couldn’t even muster overtime.

On top of an abysmal 17 points in the second half, Indiana closed out the game on a three-minute scoring drought and allowed an 11-0 Wisconsin run.

“I told my guys, ‘You can win on the road, you’ve just got to finish the game,” Woodson said.

In Woodson’s first matchup against a ranked opponent as head coach, he still couldn’t show that his team can close out a game outside of Assembly Hall.