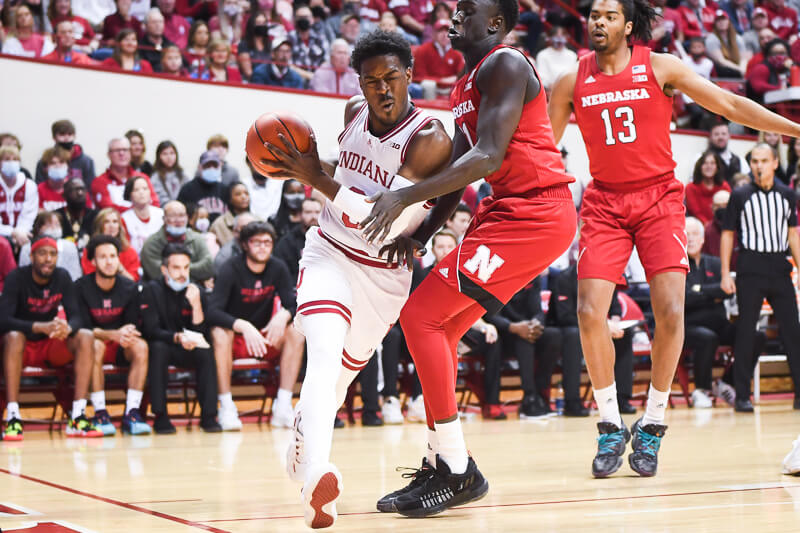 Indiana bounced back from its double-overtime loss at Syracuse with a comfortable 68-55 win over Nebraska at Simon Skjodt Assembly Hall. The victory was IU’s fifth straight over the Cornhuskers.

Here are five takeaways from Indiana’s seventh win of the season:

Points off of turnovers work in Indiana’s favor

Points off of turnovers were the difference in Indiana’s double-overtime loss at Syracuse on Tuesday night. The Orange turned 26 Indiana turnovers into 33 points. Conversely, Indiana scored just 11 points off of the 12 turnovers committed by Syracuse.

On Saturday, it was Indiana that took advantage when Nebraska turned the ball over.

Despite the fact that Nebraska turned it over one fewer time, the Hoosiers outscored the Cornhuskers 21-11 on points off of turnovers on Saturday afternoon. That’s a significant margin in a 13-point game.

Despite the improvement, turnovers continue to weigh down what has been an otherwise solid start offensively for Indiana in Mike Woodson’s first season.

On Saturday, Indiana connected on eight of its 22 attempts from distance for 36.4 percent. For the season, Indiana is now 61-of-163 on 3s and is making an average of 7.6 per game.

Last season, Indiana made an average of 5.9 3-pointers per game and shot only 32.4 percent.

Indiana has also made a slight jump in the percentage of its offense being derived from beyond the 3-point line. Last season, 25.2 percent of Indiana’s offense came from 3-pointers. Through eight games this season, that percentage is 28.5

The clear difference-maker thus far has been Parker Stewart. The UT-Martin transfer, who arrived midseason last winter, is 21-of-44 from distance this season. He’s shooting 47.7 percent. Stewart went 3-of-6 yesterday from behind the arc and all of the makes came in the second half.

The 6-foot-7 freshman was hounded for 33 minutes by Indiana’s defense and managed just eight points on 3-of-14 shooting from the field.

McGowens had been getting to the line an average of seven times per game entering Saturday’s contest, but he only attempted one free throw in IU’s 68-55 win.

Bloomington South product Anthony Leal had only played in three of Indiana’s first seven games and all of those contests were blowout victories.

In his Friday press conference, Woodson mentioned that he needed to figure out a way to get Leal into the game more often. On Saturday, with Indiana’s starters struggling in the first half, Woodson went to Leal at the 11:26 mark.

In the first 3:12 he was on the floor, Leal recorded a steal, an assist and made a 3-point shot. He only played 12 minutes, but Indiana was +9 with Leal on the floor.

“He’s been very competitive in practice,” Woodson explained. “I came in tonight knowing I was going to play him, and he responded, which was kind of nice to see.”

Race Thompson said he wasn’t surprised by Leal’s play given how he often performs in practice.

Xavier Johnson has established himself as Indiana’s best point guard through the first eight games. But Johnson has struggled at times to keep himself on the floor in key situations.

In Tuesday’s loss at Syracuse, Johnson dished out nine assists, but fouled out in only 26 minutes.

Fouls were once again a problem for the Pittsburgh transfer on Saturday. He picked up his third foul at the 19:02 mark of the second half and he played just 16 minutes.

Moving forward, Indiana is going to need Johnson to continue to defend aggressively while also cutting down on the fouls. He’s the team leader in assist rate (33.3 percent) and steal percentage (3.1) and is clearly the program’s most effective point guard.