The Minute After: Marshall 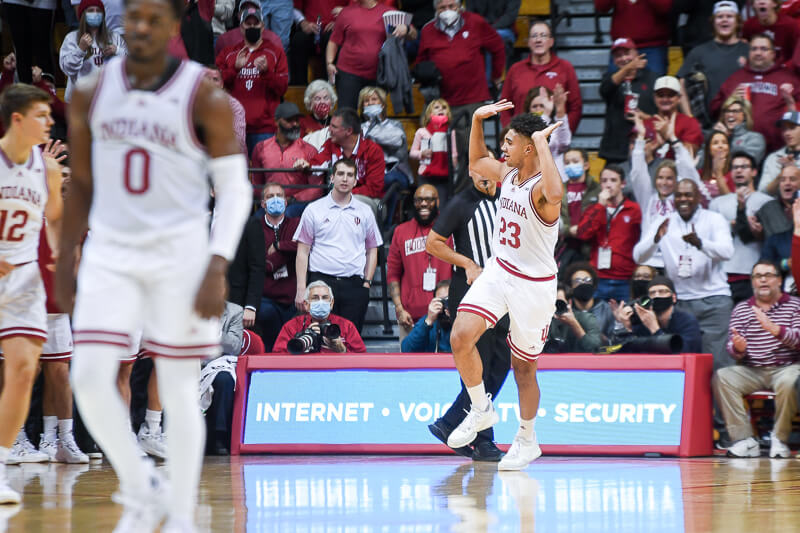 Thoughts on a 90-79 win against Marshall:

Adversity came to Assembly Hall tonight in the form of the Marshall Thundering Herd. Indiana’s defense, so stout and so dominant in the first 20 minutes of action so far this season, was nowhere to be seen. Marshall’s 5-out style picked the Hoosiers apart. Indiana struggled to contain ball screen offense. They were getting beat on lobs. They continually let the Thundering Herd drive in off the perimeter for easy scores.

After allowing 35 points in total to Jackson State earlier in the week, the Hoosiers gave up 42 to Marshall in the first half, at one point letting the Thundering Herd go off on a 17-0 run. But the Hoosiers didn’t wilt, far from it. Marshall’s 12-point first-half lead with six minutes to go eventually became a one-point Indiana advantage before NBA prospect Taevion Kinsey hit a shot at the buzzer for Marshall to enter the half up a point, 42-41.

A big reason why Indiana was able to come back in this one and eventually pull away for the victory? Trayce Jackson-Davis. It was a historic night for the junior, a player that had two feet out the door before Mike Woodson showed up on the scene. The Center Grove product scored 43 points in this one, an Assembly Hall scoring record. Marshall single-covered him for most of the contest and he just went to quick work in the post time and time again for scores. Jackson-Davis had 22 points on 11-of-14 shooting at half. In the second half, he continued his onslaught, scoring 21 points on 7-of-10 shooting, adding a highlight windmill dunk for his last bucket of the game to boot.

The junior also made 7-of-9 from the line and dished out four assists, all of which came in the second half. As Marshall finally decided to double-team him late, he did a great job of finding shooters behind the 3-point line and they converted, another big reason Indiana was able to keep Marshall at arm’s length down the stretch.

“We space the floor a lot better than we did last year,” Jackson-Davis said after the contest. “We got shooters everywhere.”

Xavier Johnson’s 20 points, seven rebounds, seven assists and five steals against just two turnovers were also key in this one. It was his best performance as a Hoosier so far in this young season, but he wasn’t above getting chewed out by Mike Woodson in a second-half huddle after Woodson called timeout. Indiana was strong from both the free-throw line (14-of-19, 73.7 percent) and beyond the arc (8-of-15, 53.3 percent) in this one, helping them reach a season-high 90 points.

The bench struggled this evening, however, scoring just eight total points — six from Tamar Bates and two from Khristian Lander. Indiana still needs to be better with the ball (20.3 TO%). And the defense gave up 1.03 points per possession, tying a season-worst.

Still, after taking a tough shot from Marshall early and wavering a bit in the second half at one point as well, Indiana bounced back to emerge with the victory and move to 6-0. The flaws are still there with this team. But the wins keep coming, too.