At The Buzzer: Michigan State 64, Indiana 58 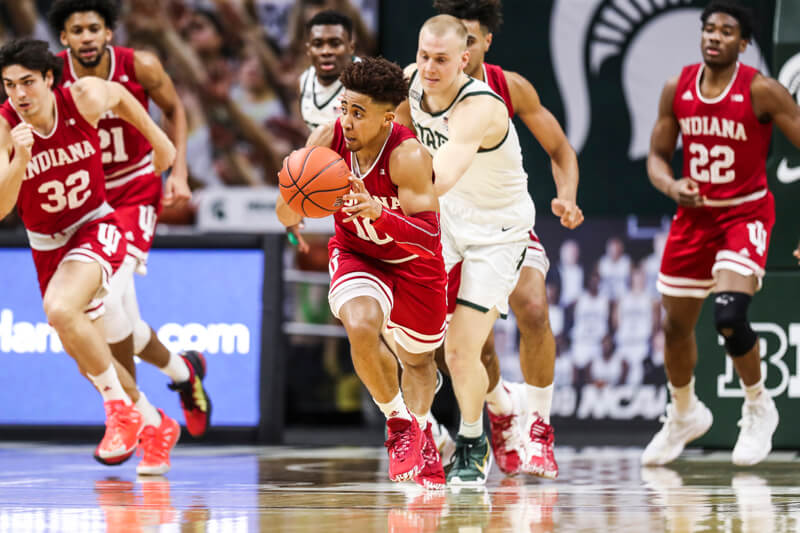 Quick thoughts on a 64-58 loss at Michigan State:

How it happened: Indiana was aggressive out of the gate in East Lansing. Rob Phinisee, who has been inconsistent for most of the season, attacked off the dribble and also splashed in the only 3-pointer of the first half for the Hoosiers. But in a game that both teams needed to get for NCAA tournament purposes, it was a struggle offensively. Indiana and Michigan State combined for 13 turnovers and shot 16-of-51 from the field. There were 19 fouls called in the first half. By halftime, both teams had mustered just 26 points each on .81 points per possession.

The fouls continued to mount up at the start of the second half. By the under 16 media timeout, the Hoosiers and Spartans were tied at 31, but eight fouls had already been whistled in the first 4:04. Indiana got into the bonus at the 14:55 mark and Michigan State was right behind at the 14:17 mark. Indiana opened a five-point lead on a Phinisee 3-pointer at the 12:46 mark. But the Spartans cut the lead to three on the next possession on a putback dunk by Marcus Bingham just before the under 12 media timeout. Michigan State then reclaimed the lead on back-to-back buckets from Gabe Brown, which put the Spartans up 42-39. The offensive flow picked up before the under eight media timeout as the teams traded buckets on several consecutive possessions. By the 6:47 mark, Michigan State led 48-47 on a Joey Hauser jump shot.

Michigan State led 53-51 at the final media timeout following a jump stop and bucket by Henry, who had 18 second half points. The Spartans stretched the lead to four at 56-52 on a 3-pointer from Henry and then got a steal from Henry and called a timeout with 1:31 to play. Henry scored again with 1:15 to play to give Michigan State a six-point lead. Indiana didn’t challenge the rest of the way and dropped its fourth straight contest.

Statistic that stands out: It was another dominant performance for Henry, who finished with 22 points. Henry scored 12 points in the final 4:34 of the game.