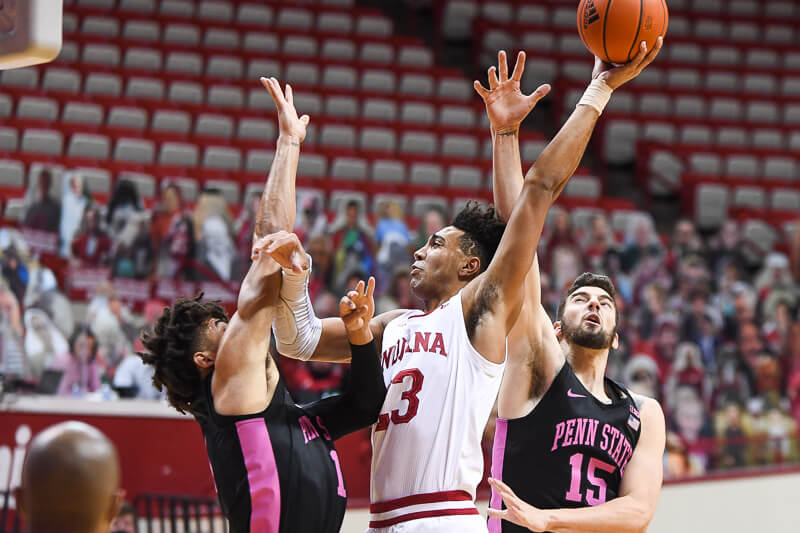 Quick thoughts on an 87-85 overtime win over Penn State:

How it happened: Indiana got off to a strong start on Wednesday night against a Penn State team that is known for taking gambles defensively and hoisting a ton of 3-pointers. The Hoosiers led 12-7 early on 4-of-6 shooting from the field. Penn State couldn’t stop fouling and Indiana took advantage by hitting its first seven free throw attempts. After a back and forth first half that saw Myreon Jones go for 14 points, it looked like Indiana might extend its cushion to double figures after a five-point possession and a 29-20 lead at the 4:30 mark. But Penn State responded with five straight points of its own. A pair of missed Race Thompson free throws to end the half sent the Hoosiers to the locker room leading only 38-33.

The Nittany Lions exploded out of the locker room offensively with 20 points in the first 7:17 of the half. While the Hoosiers weren’t getting stops, they were keeping pace offensively. Indiana made 10 of its first 13 shots to start the second half and opened a nine-point lead at 63-54 on a Rob Phinisee 3-pointer. The lead grew to 12 on an Al Durham Jr. 3-pointer with 9:56 to play, which capped off a 13-1 run. But Indiana’s defense never really put the clamps on Penn State and the Nittany Lions got the lead under double digits on a Jamari Wheeler jumper with 8:24 to play. Penn State would get within four on two separate occasions before Indiana made three straight shots to stretch the lead to nine at 75-66 with 4:45 to play. Penn State, however, wasn’t done. The Nittany Lions put together an 8-0 run to draw within one with 2:49 to play. As Indiana’s field goal drought continued for more than 3:30, Penn State took its first lead on a Sam Sessoms jumper with 28 seconds to play. Indiana tied it at 80 when Trayce Jackson-Davis split a pair of free throws with seven seconds to play and Phinisee blocked a Sessoms shot at the buzzer to force overtime.

Indiana had a scoring drought of more than 3:30 in overtime before a Jackson-Davis 3-point play gave IU an 85-83 lead with 1:03 to play. Penn State answered with a pair of free throws from Jones with 43.7 seconds to play in overtime. Out of a timeout, Phinisee hit a tough jumper in the lane with 14.3 seconds to play to give IU a 2-point lead. Sessoms lost the ball on a drive with just under four seconds to play and Brockington missed a shot from the baseline as IU survived for its first Big Ten win.

Standout performer: Jackson-Davis led five Hoosiers in double figures with 21 points in 37 minutes. He was 8-of-13 from the field and added six rebounds.

Statistic that stands out: Indiana prevailed despite giving up a season-worst 1.14 points per possession to the Nittany Lions.