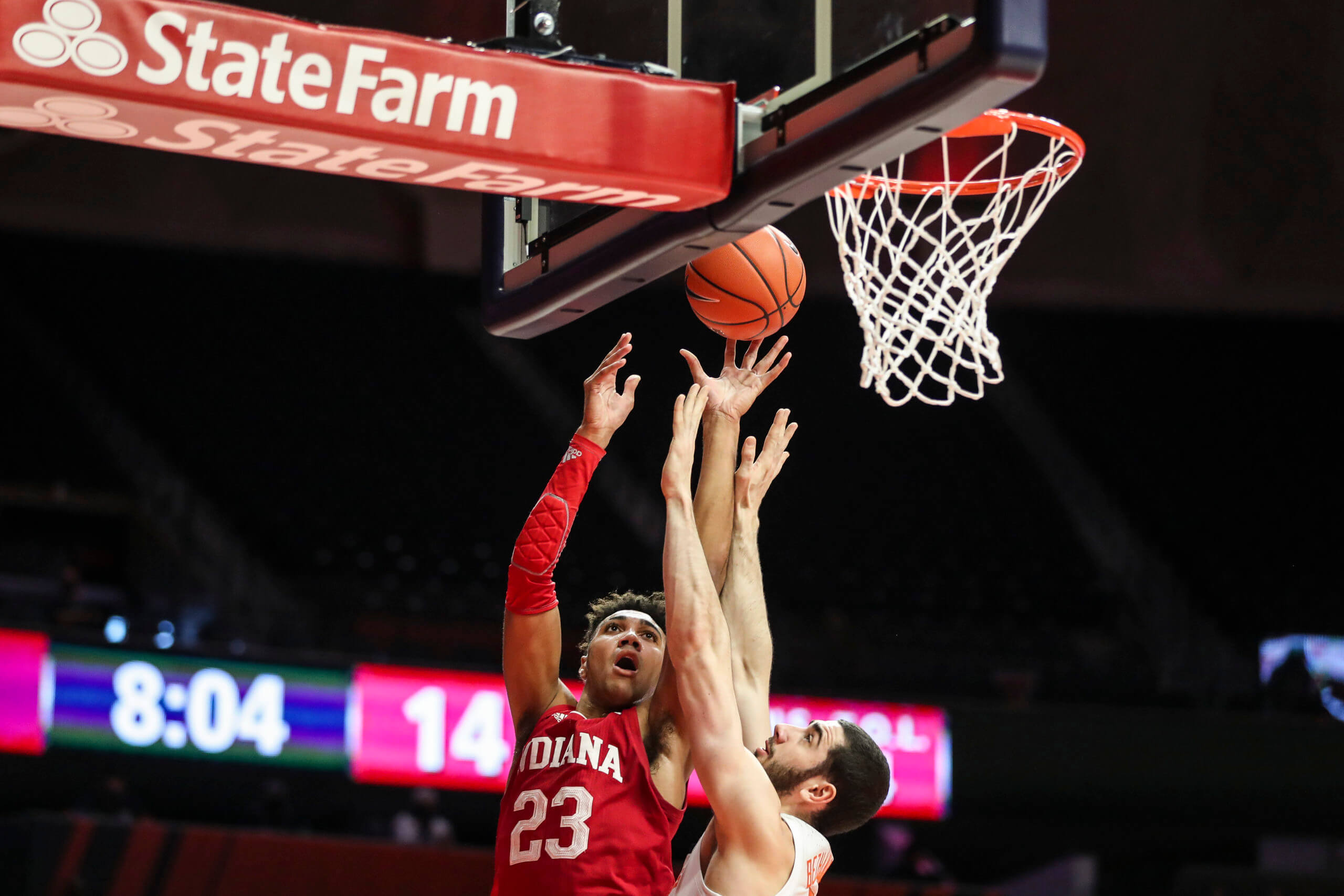 The day after Christmas hangover was in full effect this afternoon at the State Farm Center. Both teams started off cold from the field, shots clanking from the perimeter and in the paint. At the first media timeout, the offensive returns were not pretty. The teams combined to shoot just 2-of-14 from the field with both makes coming from the Hoosiers. They led 5-1. Illinois didn’t hit its first field goal until a Giorgi Bezhanishvili make at the 14:40 mark.

While the usually dynamic Illinois offense just flat out missed shots, Indiana’s defense was also more together and connected in the half court. It didn’t allow the kind of easy buckets Northwestern got earlier in the week, save for some Ayo Dosunmu makes where he worked over the Indiana defense all by himself. Still, Dosunmu, along with Kofi Cockburn, were not dominating the Hoosiers. And the fifth best 3-point shooting team in the country kept clanging 3-pointers.

With both teams struggling to make baskets, Indiana did itself a favor by taking care of the ball (15 TO%), producing more chances to score. At half, down just two points at 29-27, things felt pretty even. Indiana was in position to steal a road game against a higher-rated opponent.

Indiana stuck with it just as well in the second half, but Dosunmu, as he’s done so many times in his career, elevated his play in the final 20 and Indiana just didn’t have enough firepower to counter. The junior scored 20 after the break, which included a 4-of-4 mark from 3-point range. Dosunmu aided in a 14-0 Illinois run that saw an Indiana 49-44 lead evaporate to a 58-49 advantage for the Illini. But Indiana would not go quietly. An 8-2 run got it back to 60-57 with 4:10. But two Da’monte Williams free throws and a Dosunmu 3-pointer put Illinois back up eight with 1:46 to go. An Armaan Franklin 3-pointer pulled it back with five, but that was as close as Indiana would get the rest of the game.

Speaking of Franklin, he continues to be dynamite on offense for the Hoosiers. His 3-point shooting remains hot (5-of-6) and he scored a team-high 23 points on 8-of-12 shooting. Indiana ran plays for him in the second half to free him beyond the arc and he delivered. Trey Galloway got the start in place of Rob Phinisee today, perhaps a sign from Archie Miller that Phinisee needs to start picking it up. The junior, along with senior Al Durham, combined to shoot just 0-of-4 in the first half. But they showed more life in the second half. Durham was aggressive and scored nine points on 4-of-9 shooting. Phinisee was 2-of-4 (four points) in nine minutes of action.

It was needed as Trayce Jackson-Davis sat with foul trouble during some of the second half, scoring just three points in the final 20 minutes and just 11 for the game on 3-of-13 shooting. Jordan Geronimo and Anthony Leal also saw some time in this one with Geronimo hitting a 3-pointer in the second half. Indiana hit 7-of-18 (38.9 percent) from 3-point range in this one, its fourth straight game of strong outside shooting. (Though, Hoosiers not named Franklin made just 2-of-12.)

Miller has been preaching 10 turnovers or less and the Hoosiers finally hit that this afternoon with eight. It was their second-lowest turnover percentage (12) of the season. Illinois becomes the second team this season (and second Big Ten team) to post over a point per possession (1.04) on Indiana. But that’s lower than the Illini’s season average for an offense that’s top five in the country, per KenPom’s offensive efficiency metric.

In the end, yes, it’s another loss. And 0-2 doesn’t feel great to start the conference season. But there’s still enough good on this roster to get back to even on the Big Ten ledger with Penn State and Maryland looming.