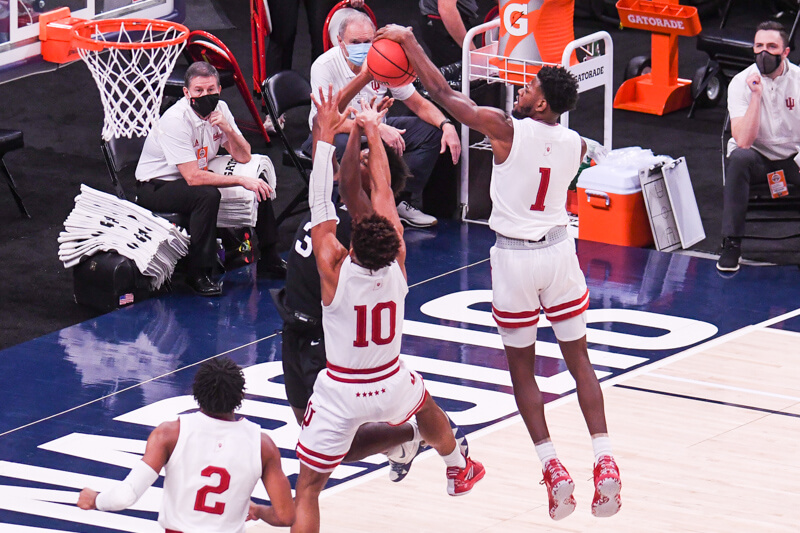 Thoughts on a 68-60 win against the Bulldogs:

Make no mistake about it: The Hoosiers played an uninspired first half of basketball today against Butler. Indiana has been able to hang its hat on a stellar defense so far this season, but you wouldn’t know it watching the first 20 minutes of this contest. Miscues allowed open 3s for the Bulldogs and they converted (5-of-7). Ball pressure wasn’t as intense. Butler hit some tough shots, but Indiana also allowed for easier ones all the same. As the first half buzzer sounded, the Hoosiers had allowed 1.14 points per possession, an uncharacteristic number for a group that’s held all opponents in full games under a point per possession so far this season.

On offense, Indiana looked a bit flat with movement and cohesion of sets lacking at times. The Hoosiers didn’t get to the line as much as usual (33 percent free throw rate), though they started out hot from deep, hitting 5-of-10 from beyond the arc. (That led to a 7-of-16 mark for the contest, good for 43.8 percent, a season-best for IU.) It’s no wonder the Hoosiers trailed at half, 37-32, and Archie Miller was about as angry and frustrated on the sidelines with his team’s performance as we’ve seen so far this season.

But Indiana laid the uninspired play to bed in the locker room at half, putting up an impressive, dominant final 20 minutes to take control of the game and roll to its fifth victory of the season. It started, as it often does for this team, on the defensive end. Early blocks and steals led to transition buckets for the Hoosiers. It energized the group and put Butler back on its heels. On the strength of a 15-3 run to start the second half, Indiana got up 47-40 and Butler never again tied the game or gained a lead.

Race Thompson and Trayce Jackson-Davis were huge for Indiana in the second half, combining for 22 of Indiana’s 36 points on 8-of-10 shooting and a 5-of-7 mark from the line. They helped the Hoosiers dominate the paint game, where Indiana outscored the Bulldogs 22-8 inside after the break. Beyond the block and steals, Indiana’s defense was also much more intense, together and focused in the second half as Butler crumbled. The Bulldogs shot just 8-of-30 from the field and finished scoring .89 points per possession for the game.

Armaan Franklin continued his sophomore breakout campaign — as well as his Bankers Life Fieldhouse hot hand — finishing the contest with 20 points, including another 5-of-7 performance from deep. (He did have five turnovers today, however.) Al Durham missed all three of his free throws and hit just 1-of-5 from deep, but hit enough 2s to finish 50 percent from the field (5-of-10, 11 points) to go along with eight rebounds, four assists, a block and a steal. Jerome Hunter’s defense was suspect in the first half, but he did knock down his only 3-point attempt, which came out of the right corner in the second half.

While it wasn’t a total 40-minute performance from the Hoosiers today, it was good to see them turn it on in the second half and not get stuck in their first-half mud. Butler was undermanned, but that doesn’t mean the Bulldogs couldn’t have won this one. Indiana’s second-half performance ensured that didn’t happen.