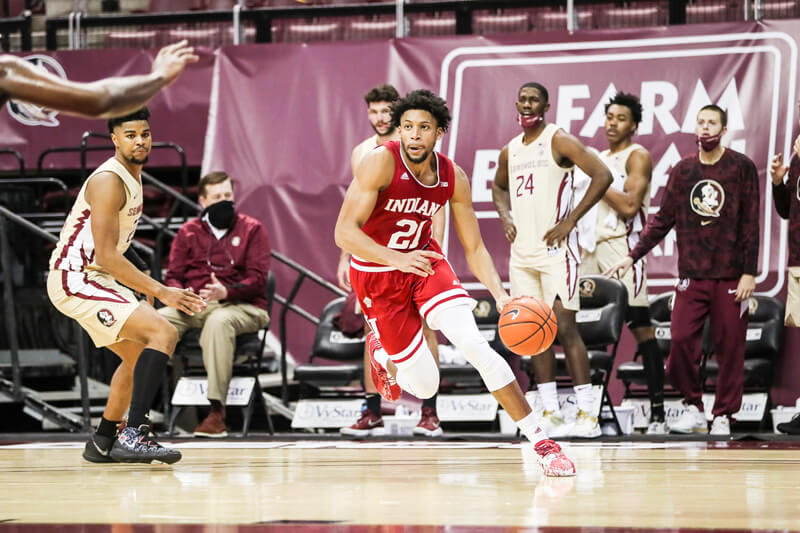 Quick thoughts on a 69-67 loss at Florida State:

How it happened: Unlike many of Indiana’s road games in recent seasons against ranked opponents, Wednesday’s contest in Tallahassee was closely contested and came down to crunch time. Despite some shaky decision making and poor perimeter shooting to begin the game, Indiana trailed by just two at intermission. The Seminoles, who failed to take advantage of nine first half turnovers from Indiana, never extended their lead beyond six points. It was a missed opportunity for Florida State. As the play settled in after halftime, Indiana’s confidence began to grow. The final stretch was back and forth. Indiana looked to be in a good spot with a two-point lead with just a minute to play, but MJ Walker answered with a 3-pointer to give the Seminoles a one-point advantage. Rob Phinisee then split a pair of free throws to tie it at 62 before Florida State took possession for the final 51 seconds. Despite three offensive rebounds and four shots in the final 31 seconds, Florida State couldn’t score, sending the game to overtime. After Trayce Jackson-Davis opened the scoring in overtime with a 3-point play, Indiana’s offense went missing the remainder of overtime. The Hoosiers did not score again until a pair of Jackson-Davis free throws tied the game with 8.7 seconds to go. But Florida State freshman Scottie Barnes answered with a bucket with 1.8 seconds to play to help the Seminoles escape with a two-point victory.

Standout performer: Jackson-Davis continues to rise to the occasion against a big time opponent. The sophomore forward notched another double-double with 25 points and 17 rebounds in 40 minutes.

Statistic that stands out: Indiana once again struggled to make shots with any consistency as the Hoosiers shot a dismal 4-of-15 on 3s (26.7 percent) and made just 40.5 percent of their 2s.