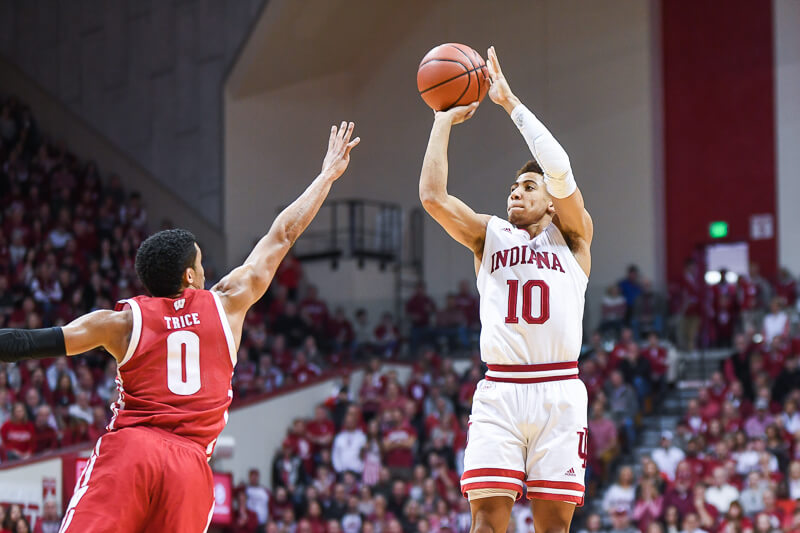 Championship Week is here, and six automatic bids have already been handed out with Liberty, Winthrop, Bradley, Utah State, Belmont, and East Tennessee State earning their way to the Big Dance. Five more conference championships are on the docket for Tuesday, followed by the Patriot League as the lone final on Wednesday.

With a relatively light slate on Monday, I thought it made sense to take a deeper look at Indiana’s profile compared to the teams immediately around the Hoosiers on BracketMatrix.com. Below are the key numbers from the team sheets used by the Selection Committee, which can be found at the NCAA site or on WarrenNolan.com. For the purposes of this exercise, the at-large pool consists of anyone on the Top 12 seed lines or in the First Four out on BracketMatrix.com.

If you want to make a case against the Hoosiers, focus on the relatively low NET ranking and the poor road record, which included some uncompetitive performances that would have also had a large negative impact on the efficiency components of the NET. It’s also fair to argue that winning just four of 14 Quad 1 opportunities isn’t good enough, but it’s worth noting eight of the 12 total defeats fall into the upper end of Q1. All that being said, the Hoosiers have nine wins in Quad 1 and Quad 2 with no bad losses and no losses outside of the top 50 of the NET. The non-conference strength of schedule is solid, and the non-NET team sheet metrics all suggest IU is an at-large caliber team. Does that mean they can sustain a loss to Nebraska on Wednesday? It’s probably best not to find out the answer to that question.

As for the other teams around them, I highlighted some of the same numbers for each of those squads as well.

· Arizona State – Despite some late season struggles, the Sun Devils enter the Pac-12 Tournament with nine wins in Q1 and Q2 as well as a 5-9 record against the at-large pool. Like a number of other teams in this range, ASU has no Q3 or Q4 losses, and they also finished 6-5 in true road games. Bobby Hurley’s club performs far better in the results-based metrics (KPI: 29, SOR: 43) than the predictive ones (BPI: 67, KenPom: 63, Sagarin: 65), and the SOS numbers are strong.

· Xavier – Only one of Xavier’s 12 losses has come outside of Q1 (at Wake Forest), but a 3-11 mark in Q1 games contains just one win (at Seton Hall) against a team in the at-large pool. Q2 home wins over Providence and Cincinnati account for their other at-large caliber victories, and a 7-1 overall mark in Q2 certainly helps the case. The Musketeers boast a 7-7 record in road and neutral games, and they rank in the top 50 in all of the other team sheet metrics, including top 40 marks in KPI and Sagarin.

· Wichita State – The Shockers have racked up 23 victories this season, but just one of those has come against a team in the at-large pool (home vs. Oklahoma). In fact, that’s their lone win against a team ranked in the top 50 of the NET. Wichita State is just 2-5 in Q1 games but does have seven Q2 victories. Despite the lack of top notch wins, the Shockers perform well in results-based (KPI: 31, SOR: 33) and predictive metrics (BPI: 39, KenPom: 39, Sagarin: 32). A 5-5 mark in true road games is solid, and there are no losses in Q3 or Q4.

· Richmond – A top 40 NET ranking, nine true road wins, and a neutral court victory over surging Wisconsin are the best attributes on the Spiders’ profile. They have three wins each in Q1 and Q2 but are only 2-2 against the at-large pool. The results-based metrics are strong (KPI: 37, SOR: 39), and they are top 50 in BPI and KenPom as well. A 24-7 overall record is impressive, and just two of those losses came to teams outside of the top 70 of the NET, including a Q3 loss to Radford on a neutral court.

· UCLA – A late season surge has pushed the Bruins back into the discussion, but they still sit at 76th in the NET with results-based metrics in the 50s, and predictive metrics all over the map (BPI: 94, KenPom: 78, Sagarin: 57). UCLA has racked up six Q1 victories, including sweeps of Arizona and Colorado. However, the Bruins have five losses to teams not in the at-large picture, including a Q3 loss to Hofstra and a Q4 loss to Cal St. Fullerton. The non-con SOS sits just outside the top 200, and that all adds up to a profile that will challenge the committee to balance its highs and lows.

· Texas – The Longhorns sit behind IU in the NET at 69th, and outside of Sagarin, the predictive metrics aren’t impressive (BPI: 68, KenPom: 61, Sagarin: 48). Texas boasts five Q1 wins as well as an impressive 8-6 road/neutral record, although the Longhorns are just 2-4 in Q2 games and have just three wins against the at-large pool. Shaka Smart’s club doesn’t have a loss in Q3 or Q4, which helps the SOR come in at 35th, but they do have three losses to teams not in the at-large discussion.

Like any bubble teams at this point in the season, there are things to like and dislike about each profile, but when compared to other teams in that range, it does feel like the Hoosiers have relatively fewer warts. Again, that doesn’t mean they can sustain a loss to Nebraska on Wednesday and still feel safe, but I wound up with them at roughly the same spot on my seed list as they are on Bracket Matrix, which is right in the middle of the 10 line.

For the first time in weeks, there has been a change on the one line with Dayton replacing San Diego State by virtue of the Aztecs’ loss in the Mountain West final as well as the fact that the Flyers have been destroying everyone in their path. Another Baylor loss also pushed the Bears behind Gonzaga on the overall seed list, but I struggle to find a scenario where Baylor falls completely off the one line. In fact, Florida State is probably the only team who could play their way into a top seed if Dayton should falter.

The projections below are based on all games played through March 9th, 2020. Following the bracket, I included a few thoughts on the last four in and first five out.

Since Cincinnati earned the top seed in the AAC Tournament, they are serving as the league’s automatic bid and cannot be placed in the First Four. If they were in the at-large pool though, they would be right on the cut line. Since I mentioned virtually all of these teams above, this will be focused largely on what’s ahead for these bubble teams.

Texas Tech – The Big 12 Tournament opener against Texas is shaping up to be a huge one for both teams. If Texas Tech can’t come out on top, they will have to hope their strong NET and predictive numbers are enough to carry the day given a poor record against the top three quadrants.

Stanford – Following a 0-2 trip to the Oregon schools, the Cardinal remain in the Last Four In. Their first Pac-12 Tournament game comes on Wednesday against Cal, and it’s not one they can afford to lose.

Richmond – The Spiders are off until Friday when they will take on either Davidson or La Salle, and a win there should set up a matchup with Rhode Island in the semifinals.

Texas – As mentioned above, the Big 12 Tournament matchup against Texas Tech will have major implications. It will be interesting to see how the Longhorns respond after getting smoked by Oklahoma State in the regular season finale.

UCLA – Ultimately the high NET ranking and the pair of bad losses pushed the Bruins outside of the field for me. They get the winner of Stanford-Cal in the Pac-12 quarterfinals, and a win there would mostly likely set up a semifinal matchup against either Arizona State or Colorado.

Wichita State – Despite some solid metrics, I just struggle to project a team that’s knocked off just one at-large caliber team to make the field. The Shockers have a first-round bye in the AAC Tournament, but their first game will likely come against a UConn team that has won five straight and eight of its last 10 games.

NC State – The Wolfpack blew out Wake Forest in their final ACC game, and they may meet again in the ACC Tournament. A win there would provide another shot at Duke. Victories over Duke and Wisconsin at home as well as a road win at Virginia are great, but it’s also worth noting that NC State has eight losses to teams not currently in the at-large picture, which is far more than other teams in this range.

Northern Iowa – A blowout loss to eighth-place Drake in their first game of the Missouri Valley Conference Tournament gave the Panthers another Q3 defeat and likely sealed UNI’s fate. A road win over Colorado gives them a terrific Q1 win, while a neutral court victory over South Carolina has proven to be solid as well. They also played two games against non-Division I teams, which the committee sometimes doesn’t care for, and I ultimately just don’t think there’s enough on the profile to earn a bid.

Mississippi State – Ben Howland’s squad split its games last week, losing at South Carolina before blowing out Ole Miss at home. The Bulldogs have just one win against at-large teams and the first five out, which came at Florida. A pair of Quad 3 losses don’t help Mississippi State’s case, and the same can be said for double-digit losses at Ole Miss and Texas A&M. The Bulldogs wound up as the four seed in the SEC Tournament, which means they don’t play until Friday. Florida is the likely opponent, and a win there would set up a huge game with Kentucky in the semis.