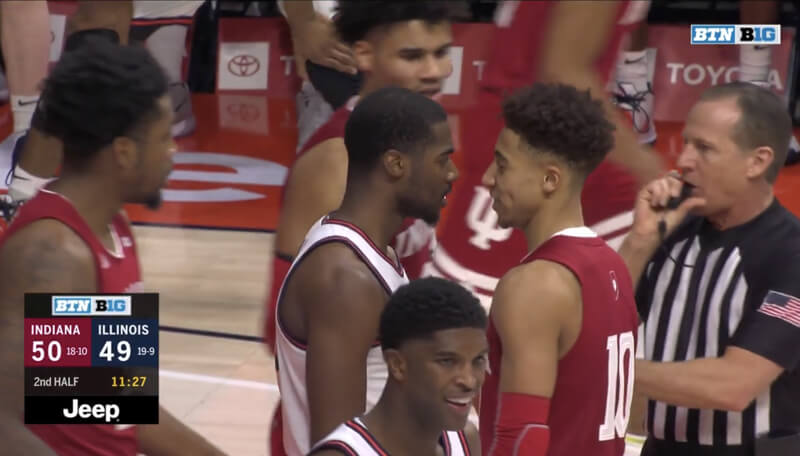 If there’s a silver lining to Indiana’s 0-2 week, it’s this: Unlike so much of the conference season, the Hoosiers competed and didn’t wilt away on the road. Despite an awful offensive performance in West Lafayette on Thursday night, Indiana fought back from a double-digit deficit and made things interesting down the stretch. Today in Champaign, Indiana hung right with the Illini from the opening tip. The Hoosiers never let them bust out or take control of the game in a way that a mini-run couldn’t put them right back in the contest.

Still, as the game hung in the balance down the stretch, the Illini’s stars — Ayo Dosunmu and Kofi Cockburn — were just too much for Indiana. Cockburn’s shot-blocking presence at the rim was a major factor, as even when he wasn’t recording one of his six blocks on the afternoon, his mere presence was altering the way Indiana players shot at the rim. The Hoosiers made just 37.2 percent of their 2-pointers today. Cockburn was a big reason why. The freshman also scored 12 of his 15 points in the second half. Whenever he got the ball down low, it felt like it was either a made bucket or an Indiana foul. His size and muscle was a lot for the Hoosiers to handle.

After nine first half points, Dosunmu scored just three points and had one made basket over the first 18 minutes of the second half. But after an Al Durham 3-pointer pulled the Hoosiers within two points (62-60) with 1:56 to go, Dosunmu, with the shot clock winding down, pulled up and splashed in a 3-pointer of his own to put the Illini back up five. It was an absolute dagger and shows why Dosunmu is about the best closer going in the league.

Yet, Rob Phinisee knocked down a three to pull the Hoosiers back with in two. And then Trayce Jackson-Davis had two free throws to tie the game. He missed the first. And the second. The Hoosiers had been a perfect 10-of-10 from the line before Jackson-Davis’ misses. Indiana was able to fight and get the rebound, but Phinisee tripped — some think he was fouled — and the Illini recovered the ball. Dosunmu was fouled. And unlike Jackson-Davis, he hit his two key free throws to put the Illini up four. So Phinisee’s 3-pointer at the buzzer still meant a Hoosier loss.

Today’s game was a heartbreaker that’s tough to swallow. But the heartbreak means Indiana actually had something to fight for and come up just short on, not a 30-point second half deficit where the Indiana faithful had tuned out. The kind of effort and resolve Indiana showed this week on the road bodes well for an important upcoming two games at home to close out the regular season. Play like this against Minnesota and Wisconsin? The hope is it’s at worst a split, at best a 2-0 mark. The latter should put the Hoosiers into the tournament for the first time in the Archie Miller era, and everyone can breath a sigh of relief.