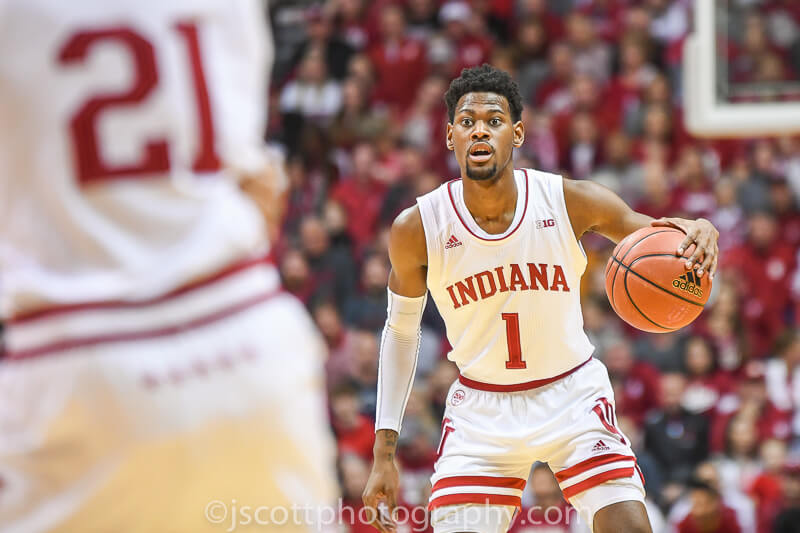 How it happened: Unlike many of its previous road efforts, Indiana came ready to play on Sunday afternoon at the State Farm Center. The Hoosiers played the Illini even in the first half and led by as many as five points after an Al Durham Jr. 3-point play at the 4:36 mark. Trayce Jackson-Davis was the clear standout for the Hoosiers in the first half with 10 points and five rebounds in 15 minutes. And despite turning it over on 19 percent of its first half possessions, Indiana managed to score 1.12 points per trip against one of the Big Ten’s best defenses. And early in the second half when it looked like Illinois was ready to pull away, Indiana had an answer. Trailing 45-40 with 14:41 to play, the Hoosiers went on an 8-2 run to grab a 48-47 lead. The Hoosiers, however, would lead for the final time – 53-51 – at the 9:27 mark on a Devonte Green 3-point play. Illini freshman Kofi Cockburn was a difference maker in the second half after a quiet first half. Cockburn finished with 15 points, five rebounds and six blocks. And down the stretch, Ayo Dosunmu made a huge 3-pointer and a pair of free throws to ice the 12th conference win for the Illini.

Standout performer: Jackson-Davis finished with another double-double as he finished with 12 points, 12 rebounds and two blocked shots in 33 minutes.

Statistic that stands out: 2-point shooting was a major issue for the Hoosiers as they shot just 37.2 percent inside the arc. Cockburn’s presence at the rim was a major reason for that.