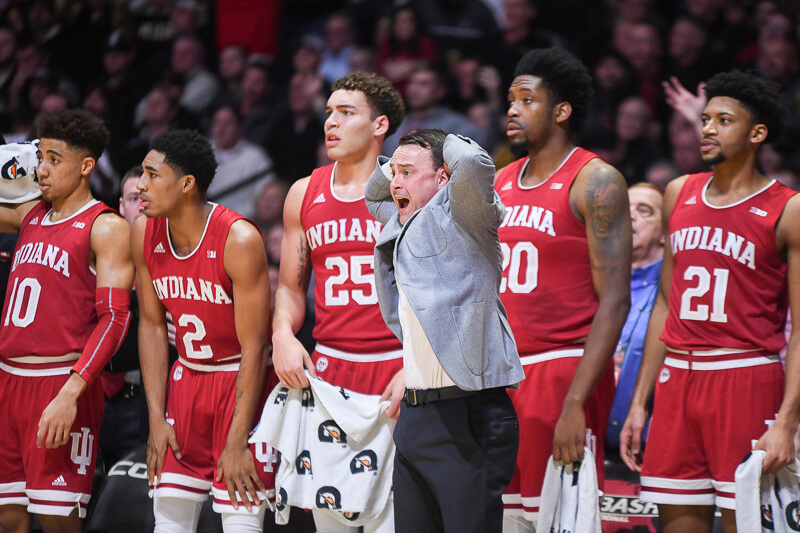 Thoughts on a 57-49 loss to the Boilermakers:

Mackey Arena rocked and rolled, leading to a frantic first half for this bitter in-state rivalry. Yet, Indiana seemed poised to match the moment. The Hoosiers grabbed an early 6-2 lead. They were competing hard and grabbing rebounds.

The offense, though? It was leaving a lot to be desired. The Hoosiers weren’t just missing shots. They were tossing up ugly bricks that had no chance. By the time the half came to a close, the numbers were atrocious. Indiana had more turnovers (8) than made shots (6). The Hoosiers scored just 20 points and a lowly .61 points per possession.

Purdue wasn’t performing much better on the offensive end. But as Indiana’s guards turned the ball over in the closing minutes of the half, it allowed the Boilermakers a 10-2 run which they used to carry a nine-point lead into halftime. Indiana looked like it was going to get run out of the gym in the second half. While the shots still weren’t falling, Purdue also defended Indiana well, double teaming Trayce Jackson-Davis in the post and not allowing much in the way of space for Indiana’s guards. So between its drought to end the first half and its inability to hit a field goal to start the second 20 minutes of action, the Hoosiers went 10:03 of game time without a bucket which allowed Purdue to get up by as much at 16. A Rob Phinisee drive and score with 13:37 to go finally broke the drought.

And the Hoosiers, despite all their troubles in this one, never gave up and packed it in like we’ve seen at other times this season when they’ve gotten down by double digits on the road in the second half. They kept fighting despite the hole they found themselves in. Phinisee played inspired and had seven second half points. Race Thompson blocked two shots, grabbed seven boards and scored four points during the second half. It all allowed the Hoosiers to make somewhat of a game of it, getting as close as five within the last minute of the contest.

But it was just too much ground to make up on a night not much was going right. Purdue dominated Indiana in the paint (34-20), as the Hoosiers couldn’t slow the craft and speed of Trevion Williams, who scored a game high 19 points (8-of-17). Jackson-Davis scored just six points and grabbed only four rebounds, barely getting involved in the second half. Devonte Green was 3-of-15 from the floor, including 3-of-14 from deep. Indiana scored just .76 points per possession for the contest.

The Hoosiers are in better shape than the Boilermakers in terms of making the NCAA tournament, but Matt Painter continues to dominate Indiana. Purdue has now beaten the Hoosiers seven straight and 10 out of the last 11. The Paint Crew chanted “Little Archie” and “IU Sucks” and had their fun tonight. Unless these teams somehow match up in the Big Ten tournament, it’s yet another what until next year for Archie Miller to finally get a win against the Boilermakers.