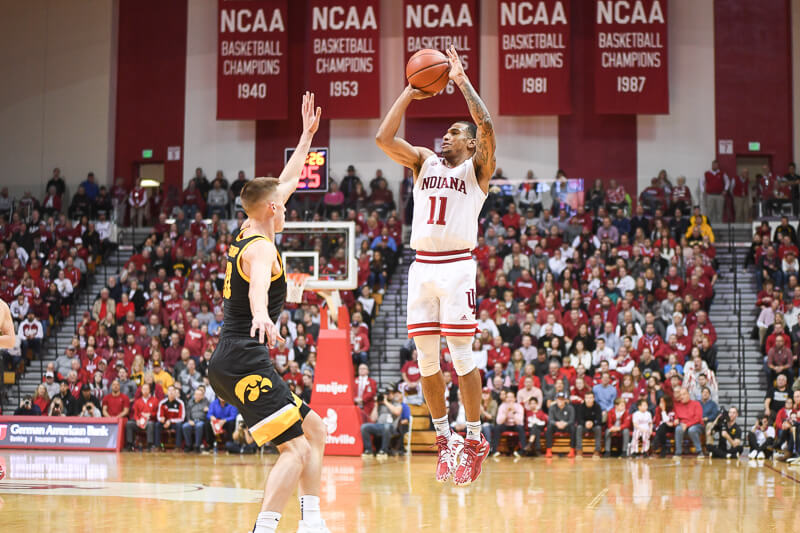 Thoughts on an 89-77 win against the Hawkeyes:

With their season sliding downhill, the Hoosiers regained some footing tonight inside Simon Skjodt Assembly Hall.

Indiana’s 3-point shooting, so often a weakness, was a strength in this one. Devonte Green was a big reason why. Green has been an inconsistent shooter this season and an often frustrating watch as his career nears its end. But with his brother Danny watching from the stands — and just as he did against Florida State — Green put on an absolute show against the Hawkeyes. Green flipped up four 3-pointers in 2:33 of game time in the first half. He sunk them all. The senior finished the game a sensational 7-of-11 from deep and with a team-high 27 points. It helped the Hoosiers to their most 3-point makes of the season (11) and their second best percentage from distance (52.4). Of course, Green also had three failed alley-oop passes in this one. But when he’s this hot, you just ride with the miscues.

“It’s always good to see the first one go in, and the second one, and the third one,” Green told the Big Ten Network’s Shon Morris on the court after the game.

Indiana, like plenty of other teams this season, had no answer for Luka Garza tonight. Iowa’s big man played 40 minutes and scored 38 points, hitting shots from all over the floor on a 14-of-22 (63.6 percent) shooting performance. He accounted for nearly half (49.3 percent) of Iowa’s points. But Indiana did great work otherwise on the Hawkeyes, a key to the victory. Justin Smith made things difficult for Joe Wieskamp. The sophomore made only one shot in the first half, though some late buckets helped him get up to 16 for the game. No other Iowa players scored in double figures. Indiana sped the Hawkeyes up on defense and racked up 11 steals, which helped them along to 25 points off turnovers. The Hawkeyes came to Bloomington with the best offense in the conference (1.11 points per possession), but the Hoosiers held them under that average tonight (1.00).

Indiana’s guard play was suspect over its four-game losing streak, but beyond Green’s hot hand, Rob Phinisee came up big in this one as well. The sophomore had 12 points (4-of-9, 2-of-3 from deep) and five assists, though he also coughed the ball up five times. Trayce Jackson-Davis continues to have an impressive freshman season, posting another double-double (17 points, 10 rebounds). And Race Thompson, seemingly feeling better after sustaining an injury against Michigan State on Jan. 23, had arguably his best game as a Hoosier on both sides of the ball. Thompson got more run in this one thanks to Joey Brunk’s foul trouble and scored a career-high 10 points. He led the team with four steals to go along with two blocks. Indiana also got back to its strong offensive rebounding ways (43 OR%) against the Hawkeyes this evening.

The Hoosiers were not without fault tonight. After doing a great job taking care of the ball to start the contest (just one turnover at the under-8 timeout), Indiana’s turnover problems returned and the team finished the contest with a turnover percentage of 22.2. And after the Hoosiers built a 20-point lead in the second half, it was clear they lost some focus and the defense wasn’t as crisp.

Still, this team was desperate for a win and they got that tonight.

“We were mentally right,” Archie Miller said of his team after the contest.

Indiana’s going to need to continue to be mentally right. Because its next five games — four of which come on the road — are all projected as losses on KenPom. Tonight stemmed the tide some. But the waves of this Big Ten season just keep coming.