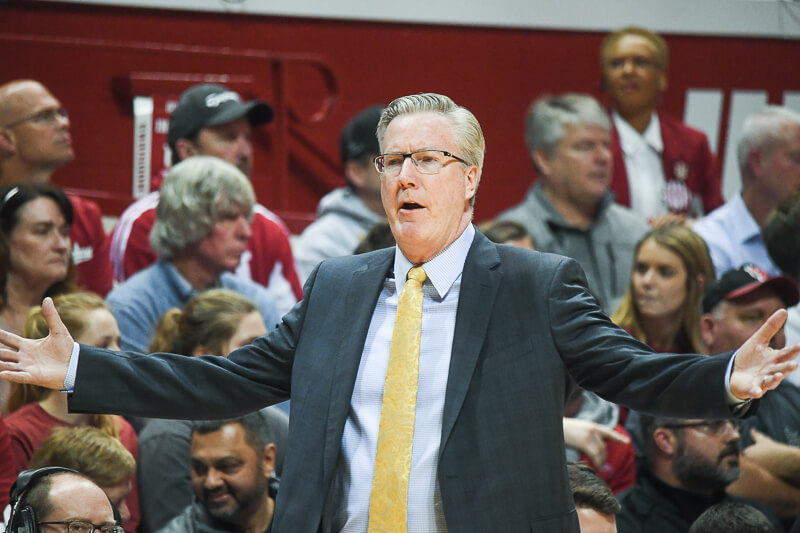 The prevailing narrative of this college basketball season so far has been the lack of a dominant team. Even so, Baylor, Gonzaga, Kansas, and San Diego State are beginning to create a bit of separation at the top of the bracket. Those top seeds remain unchanged from last week’s projections, but there is very little separation among the next ten teams, leaving a thin line between the two seeds and some of the four seeds in this week’s field.

Among those teams are ACC front-runners Duke, Florida State, and Louisville, all of whom are not being helped by a league that provides very few chances for quality wins. Seton Hall has already racked up seven Quad 1 wins, while Big East rival Villanova has quietly amassed eight victories in Quad 1 and 2 with no bad losses. Dayton has great computer numbers, and their only two losses came in overtime on neutral floors to Kansas and Colorado.

Then you’ve got preseason favorite Michigan State, who has three Quad 1 wins and another five against Quad 2, and West Virginia who doesn’t have a ton of top-end victories but has 10 victories combined in the top two quadrants. Maryland also has double-digit victories in Quads 1 and 2, while Oregon has five Quad 1 wins, three of which have come in overtime, but a bad loss at Washington State is definitely a blemish on the Ducks’ profile.

Once again, the Big Ten leads the way with 11 teams in the field, including 10 with a nine seed or better. On the flip side, the last few teams in and the first few teams out are littered with unimpressive profiles. If you wanted to swap any of the first teams out with the last teams in, I wouldn’t pound the table for any of them.

Once again, selecting the top seeds felt like the easiest part of this week’s exercise.

All four of last week’s one seeds came away unscathed, leaving Baylor, Gonzaga, Kansas, and San Diego State atop the seed list in that order.

The projections below are based on all games played through January 27, 2020. Following the bracket, I included a few thoughts on the last four in and first five out.

Virginia Tech – The Hokies have certainly been a pleasant surprise in the ACC and own a neutral court win over Michigan State. They have also picked up a few solid victories on the road, but eight of their 14 wins fall in Quad 4 thanks to a sub-300 non-conference strength of schedule. This week features a winnable road game at Miami before a home date with Florida State over the weekend.

Purdue – As mentioned last week, I gave the nod to the Boilers even though history isn’t on their side. Purdue currently sits at 11-9, and the last time a team earned an at-large bid with a record just two games over .500 was back in 2001. That said, Purdue has two Quad 1 wins and three more in Quad 2, and the computer numbers are strong. A poor record away from home, including a Quad 3 loss at Nebraska, doesn’t do them any favors though.

Arizona State – Saturday’s comeback win over in-state rival Arizona forced me to take another look at ASU’s profile, and it’s better than you might think. The Sun Devils own that home victory over Arizona as well as a neutral court win over fellow bubbler St. John’s, and only one of their losses has come against a team outside the Top 40 of the NET, which was a three-point neutral court loss to Virginia.

St. John’s – With NC State losing at home on Monday night, the Red Storm slipped into the field. Wins over West Virginia and Arizona are fantastic, and a sweep of DePaul helps for bubble purposes. However, a home loss to Vermont falls in Quad 3, and eight of the team’s 13 victories fall in Quad 4. Like any of these teams near the cut line, there are plenty of holes in the resume. Four of the Red Storm’s next five contests come at home, starting with games against Villanova and Georgetown this week.

Minnesota – Like Purdue, the Gophers are just two games over .500 after splitting their games last week. Since I don’t see A) the Big Ten getting 12 teams in and B) two teams at two games over .500 getting in, I included just one of them in the field. Purdue’s profile is slightly better in my view, which leaves Minnesota and its 1-6 road mark on the outside looking in. Home victories over Michigan and Penn State along with a sweep of Ohio State are the headliners, but another tough road game awaits at Illinois this week.

NC State – The Wolfpack picked up a second Quad 3 loss by losing at home to North Carolina by 10 points on Monday night. They have a home win over Wisconsin, but their other two Quad 1 wins came on the road against Virginia and UNC Greensboro. At this point, there just isn’t enough meat on the profile. Things don’t get easier with Louisville coming to town over the weekend followed by a three-game road trip.

DePaul – A pair of home losses have pushed the Blue Demons outside the field. They’re still in the conversation thanks to a solid quartet of victories against Butler, Iowa, Minnesota, and Texas Tech. However, home losses to Buffalo and Providence (to a lesser extent) and a relatively poor non-conference strength of schedule don’t allow for much breathing room. DePaul now hits the road for four of its next five.

Rhode Island – The Rams have won six straight since losing their A-10 opener, and wins at VCU and home against Alabama help for bubble purposes. A 10-point loss at sub-200 Brown, however, does not. For now, Rhode Island needs to avoid bad losses and perform well in remaining games against VCU at home as well as the home-and-home with Dayton.

Alabama – Following a 2-4 start, Nate Oats’ club has improved dramatically, winning eight of their last 10 games with one of the losses coming in double-OT against Florida and the other on the road at Kentucky. The computer numbers are decent, but they need to stack more wins against tournament-caliber teams over the remainder of the SEC season. As of now, their top victories have all come at home against Auburn, Mississippi State, and Richmond.