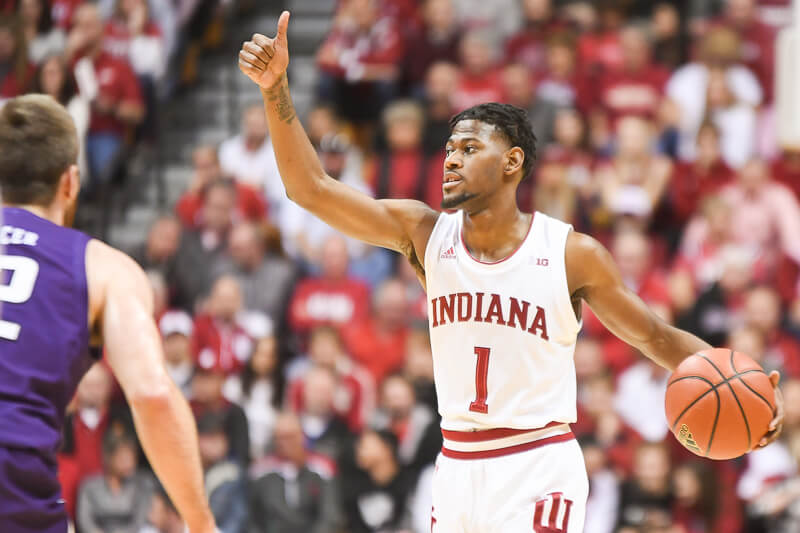 Thoughts on a 66-62 win against the Wildcats:

Tonight’s performance from Indiana didn’t instill much confidence things are going to turn around.

While the Hoosiers knocked down their first two 3-pointers of the night, they’d only go 1-of-12 the rest of the way. That’s a 3-of-14 (21.4 percent) mark, about where they’ve been over the last several contests. And a couple of those misses were quite ugly, not even finding the rim. The Hoosiers didn’t score a field goal the last 7:05 of the first half as Northwestern’s zone shut them out and the Wildcats took the lead. And after coughing up the ball and letting Maryland run away with the game on Saturday, more of the same came in this one. Indiana turned it over 11 times in the first half (five of those from Justin Smith), leading to a turnover percentage of 23 for the game. Almost 25 percent (15 of 62) of Northwestern’s points in this game came from Indiana miscues.

The Hoosiers couldn’t muster a point per possession (.95) against a undermanned 5-8 Northwestern that’s a clear cellar dweller in the conference. On the other side of the ball, Indiana defenders completely lost their men at times, allowing the Wildcats easy looks at the bucket. And worse yet, sometimes the Hoosiers didn’t seem to be trying all that hard, either.

And as Northwestern extended its halftime lead of three (34-31) out to 10 points with 11:59 to go in the contest, Indiana was listless. The Hoosier faithful in Simon Skjodt Assembly Hall were frozen and silent. Smith threw a towel on the ground after being subbed out. It was the lowest point of the season to date and fair to think this team was bound for another woeful Big Ten season.

But things turned around in this one and Indiana was able to pull out the victory. The biggest reason why? Indiana started to play with much more intensity, energy and effort. Defense turned into offense, spurring a run of easy points after the Hoosiers got down by that 10-point margin. Al Durham was the biggest catalyst as Devonte Green (who never returned to the game after being subbed out at the 11:04 mark) and Rob Phinisee watched from the bench. Durham played strong on-ball defense against Pat Spencer, who was able to break down Green and Phinisee earlier in the contest. Indiana’s defense as a whole also played much harder and smarter. And while Durham only shot 2-of-7 from the floor, he continued to get fouled as Indiana mounted its comeback, eventually finishing the contest 11-of-12 from the charity stripe.

After Smith sulked on the bench, he returned at the 10:59 mark and immediately went to work, grabbing an offensive rebound and hitting a tough jumper to pull Indiana within eight. Smith continued to work the offensive glass, putting back one of his own and a Phinisee miss during the final stretch of the contest. The junior also racked up three steals to close out the game, perhaps the biggest factor in Indiana turning defense into offense to pull this one out. After a poor start to the game, Smith recovered in a huge way when it mattered most.

Against a Northwestern team playing at a talent deficit, the Hoosiers got back to the free throw line in droves. Their free throw rate of 55.6 was their highest since the Nebraska game on Dec. 13 (55.9). They made a strong 23-of-30 of those. In a game they struggled to shoot it again, the Hoosiers getting to a line a bunch and converting was their saving grace. It also helped they held the Wildcats to just 12 points over the last 12 minutes of the game.

Change may be afoot in the rotation.

“I don’t necessarily know right now if the 11-guy rotation’s gonna work,” Archie Miller said after the game. “I just don’t know if that’s going to work if we can’t get all 11 guys heated up.”

Who knows if a lineup trim is going to turn things around. But it’s worth a shot. In a league as unforgiving as the Big Ten, Indiana’s downward trend needs to turn around before it’s too late.