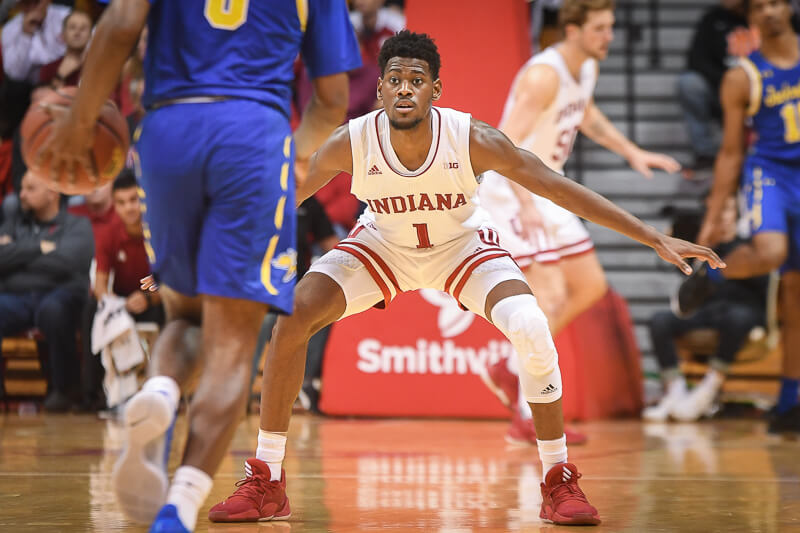 Indiana improved to 7-0 with a 64-50 win over South Dakota State on Saturday afternoon at Simon Skjodt Assembly Hall.

Here are five takeaways from the win over the Jackrabbits:

· Jackson-Davis continues to dominate in the paint: Indiana freshman forward Trayce Jackson-Davis isn’t playing like a newcomer to college basketball.

In Saturday’s win, Jackson-Davis recorded the fourth double-double of his young career with 19 points and 14 rebounds. The 6-foot-9 forward also led the Hoosiers with four blocked shots.

On an afternoon in which South Dakota State packed the paint and dared Indiana to shoot from the perimeter, Jackson-Davis was one of the lone bright spots in the paint and at the rim for the Hoosiers.

“Trayce was dominant on the glass tonight,” Archie Miller said postgame. “He went up and got five or six balls that nobody else can get. And in and around the basket, continuing to find different ways for him to be effective is a big deal.”

While Jackson-Davis has yet to meet a significant challenge in the paint through seven games, that will change beginning Tuesday. Florida State, first nationally in Ken Pomeroy’s average height metric, comes to Bloomington for the Big Ten-ACC Challenge.

· Smith continues to show off improvement: After being labeled at times by opponents a season ago as a non-threat offensively, Justin Smith is a different player so far this season.

Smith has been more active on the offensive boards and more controlled with his finishes at the rim. Through seven games, he’s shooting 61.4 percent on 2s and his offensive rebounding percentage (12.5) ranks in the top 150 nationally.

His talent and athleticism have never been in question, but Smith has struggled in the past to find his role offensively. This season, he’s been more selective in taking perimeter shots and has been doing a better job of using his size and his body to finish plays in traffic.

“If the guy who is guarding me is a smaller defender, then I feel I can use my strength and use my body to get that quick hook shot over them,” Smith said. “It’s definitely something I worked on over the summer and I’ll continue to utilize during the season.”

· Guard production wanes in victory: Despite winning Saturday’s game comfortably, Indiana did so with little production from its starting backcourt.

In 48 minutes, Al Durham Jr. and Armaan Franklin combined for just eight points and had five turnovers to go with their five assists. The duo shot just 3-of-13 from the field.

Fortunately for Indiana, Devonte Green provided a much needed spark offensively off the bench with 11 points on 4-of-8 shooting.

If Rob Phinisee can’t return soon, the Hoosiers are going to need more from Franklin as well as Damezi Anderson and Jerome Hunter, who both have been inconsistent off the bench.

Miller noted in his postgame press conference that Franklin is struggling with his confidence right now and also said that Anderson and Hunter are going to need to play more against the bigger and better teams that await on IU’s schedule.

On his first reference to Phinisee on Saturday, Miller said “hopefully we can get Robert back at some point in time” and on his second reference, Miller said “if we get Rob back here eventually.”

Those comments, of course, sparked a follow up question from Dustin Dopirak of The Athletic regarding the status of Phinisee moving forward and whether a medical redshirt is on the table.

“No. He’s day-to-day with what we’re doing, but I don’t have a return date or when he’s coming back to practice,” Miller said. “He’s kind of 50-50 on contact, non-contact. But no, there’s no redshirt on the table right now.”

Phinisee’s absence, if it is prolonged, could be a major issue as the schedule toughens in December. Without Phinisee, Indiana doesn’t have a pure scholarship point guard on its roster.

“College basketball comes down to, obviously your depth, but it comes down to guard play,” Miller said. “We have always said that.”

· Turnover issues continue for a second straight game: Indiana’s turnover percentage of 21.8 against Louisiana Tech was its worst of the season at the time, but Saturday’s performance was far worse.

Turnovers were clearly on Miller’s mind in his postgame press conference with Florida State looming on Tuesday. The Seminoles are turning opponents over on 25 percent of their possessions and have length and athleticism that Indiana has not seen this season.

“Florida State is going to turn you over like crazy on Tuesday night,” Miller said. “Their size, their switching, their length at the basket, it’s going to be impossible to just get 2-point baskets. You’re not going to have that. So our guards got to take care of it, our team has to be better offensively to take care of the ball when we get into a halfcourt setting.”