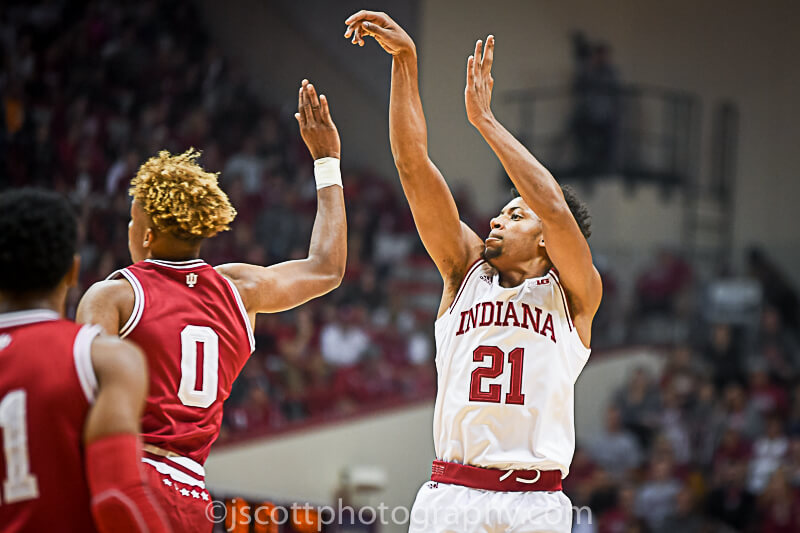 A little more than a month remains until the start of the regular season, but the 2019-2020 Indiana Hoosiers will take the floor for the first time in front of fans this weekend.

Hoosier Hysteria, the annual season tipoff for IU basketball, will take place on Saturday at 4 p.m. at Simon Skjodt Assembly Hall. The event will also be streamed live on BTN+.

· Will Jerome Hunter play in the scrimmage? While it’s unfair to say that Indiana’s success as a team this season hinges on whether Hunter can play, if he is healthy and able to contribute, the ceiling for IU is arguably much higher.

The last time Indiana fans saw Hunter playing in live, five-on-five action was over a year ago at last year’s Hysteria. All of Archie Miller’s comments this preseason indicate that Hunter has been a full participant in the team’s workouts.

Assuming he plays in Saturday’s scrimmage, how he looks and plays is easily the most intriguing storyline of the afternoon. Hunter will certainly have rust to knock off early in the season, but his versatility and ability to shoot from the perimeter are two things that Indiana could definitely use this season.

· Calbert is back: The Big Ten’s all-time leading scorer, Calbert Cheaney, will be in the building on Saturday afternoon to be honored for his selection last spring to the National Collegiate Basketball Hall of Fame.

The Evansville native will be enshrined on Nov. 24 in Kansas City at the 2019 National Collegiate Basketball Hall of Fame Induction Celebration.

Cheaney was in Bloomington in October during the Victor Oladipo Fantasy Experience and was among first to sign Indiana’s new alumni wall:

? A new #IUBB tradition.@vicoladipo & @calbertcheaney are the first to ink their signatures on our new alumni wall. pic.twitter.com/qrbjfyoxqa

· Star studded cast of recruits: Hoosier Hysteria is an event put on for both fans and recruits.

Two of the program’s three class of 2019 commits – Anthony Leal and Trey Galloway – will be making official visits this weekend.

And their AAU teammate, Khristian Lander of Evansville Reitz, will be making a junior year official visit this weekend. Lander is the No. 12 player nationally in the 2021 class according to the 247Composite.

Leal and Galloway, along with Jordan Geronimo, can sign National Letters of Intent with the Hoosiers next month during the early signing period.