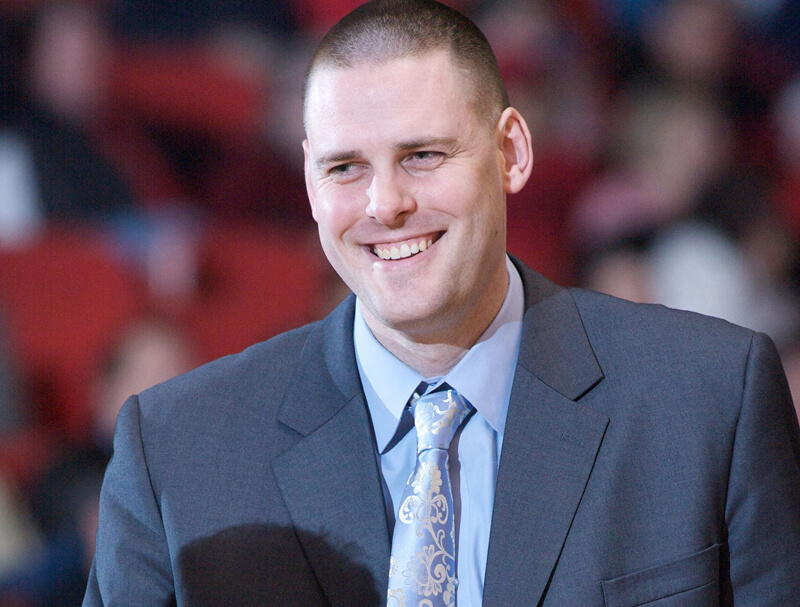 After news broke on Wednesday that Mike Roberts would be joining the coaching staff to replace Ed Schilling, Indiana coach Archie Miller confirmed the hiring on Thursday evening.

“Mike is someone who I think can have a great impact on our program,” said Miller. “He has played an important role in establishing a championship culture at UNCG and his love for Indiana basketball is very evident. I think he brings outstanding qualities to every facet of what we were looking for in this position. If you look at his track record, he identifies great people and players who have achieved success in their development. Mike helps them reach their maximum potential which has allowed so many of their players continued opportunities to compete after their graduation.”

Roberts was with the Hoosier program from 2001-2005 and helped the Hoosiers to three NCAA tournament appearances and one NIT berth and was a member of IU’s 2002 NCAA runner-up squad. He was a three-time Academic All-Big Ten Conference selection and earned the Big Ten Sportsmanship Award in 2005, when he was a team captain. He played in 64 gamed during his career.

“I’m thrilled for the opportunity to come back to my home state and the city of Bloomington and appreciate that Coach Miller would like me to return to be a part of the IU family,” noted Roberts. “Without a doubt, IU was a place that helped shape me and I’m honored to be able to give back to this basketball program and University. I’m excited to work with an outstanding staff and am looking forward to getting to know our players. I am also very grateful to all of the great coaches I was able to work under that helped me develop as a mentor and coach.”

Roberts helped the Spartans reach the 20-win mark each of the last three seasons for the first time in program history including last year’s 29-win campaign. Additionally, the Spartans have earned a trip to either the NCAA Tournament or National Invitation Tournament each of those three years.

Last year, UNCG earned the No. 1-overall seed in the NIT as the Spartans earned a first round win over Campbell to finish the year perfect against in-state competition. During the season, UNCG set new school-best marks in consecutive home victories (17) and non-conference victories (11) as the Spartans reached the championship game of the SoCon Tournament for a third straight year. With Roberts’ guidance, three players earned postseason honors. Sophomore guard Isaiah Miller was named SoCon Defensive Player of the Year – the second-straight year a Spartan earned the distinction – while he and senior guard Francis Alonso were first-team All-SoCon selections by the coaches. Additionally, junior forward James Dickey was named a third-team All-SoCon selection by the media.

During the 2017-18 season, Roberts assisted UNCG in reaching the NCAA Tournament for the first time in 17 years, as the Spartans defeated ETSU in the Southern Conference Tournament Championship. In the first round of the NCAA Tournament, No. 13 seeded UNCG had No. 4 Gonzaga on the ropes before suffering a narrow 68-64 defeat. In December, UNCG defeated North Carolina State for the program’s first victory over one of North Carolina’s four ACC teams, erasing a 14-point deficit to score an 81-76 victory. Under Roberts’ assistance, guard Francis Alonso earned first-team All-SoCon honors and forward James Dickey was named SoCon Defensive Player of the Year. Guard Isaiah Miller was also a SoCon All-Freshman.

Roberts also helped the Spartans earn their third Southern Conference regular season championship and the program’s first-ever No. 1 seed in the SoCon Tournament in 2016-17. He helped UNCG to a 25-10 overall record and a 14-4 mark in SoCon play. UNCG advanced to the SoCon Tournament Championship game for the third time in program history and the first time since 2005. Roberts aided the Spartans to their second-straight postseason appearance and just the fifth appearance in program history as UNCG earned the SoCon’s automatic bid into the National Invitation Tournament (NIT). Roberts helped center R.J. White earn All-Southern Conference honors three times in his career and finish eighth all-time in scoring with 1,460 points and fourth in rebounds with 878 caroms. White was the league’s dominant post player during his final two years, including ranking 11th in NCAA Division I in field goal percentage in 2015-16 (61.6%).

In 2015-16, Roberts helped the Spartans finish with a 15-19 campaign last year. The 15 victories were the highest since the 2007-08 season while the Spartans’ 10-8 record in SoCon play matched their win total in the league from 2011-12. He helped UNCG to just its fourth postseason appearance in program history as the Spartans took part in the College Basketball Invitational (CBI), advancing to the quarterfinals. UNCG picked up its first-ever postseason win in program history with a 69-65 win over Houston Baptist at home at the Greensboro Coliseum. He coached All-SoCon performer Kayel Locke, who went on to start for KB Bushkimi Prizren- Kosovo in Europe.

Roberts helped UNCG picked up just its second victory all-time against an ACC opponent in 2013-14 with a win at Virginia Tech, its first over the ACC since 2007. He guided former standout Kyle Cain earn All-SoCon accolades during his one year on campus, averaging 15.4 points and 8.9 rebounds per game. Cain was named Second Team All-Region in 2014 before heading overseas to continue his career professionally.

During his coaching career, Roberts was the position coach for three NBA draft picks, including Ryan Anderson to the Orlando Magic in 2008 (21st pick), Devon Hardin to the Seattle Supersonics in 2008 (50th pick) and Arsalan Kazemi to the Washington Wizards in 2013 (54th pick).

Roberts came to UNCG after four years as an assistant coach at Rice under head coach Ben Braun. Roberts also served two years on Braun’s staff at California from 2006-08. The Owls improved in each of the last three seasons with Roberts on staff, culminating in a 19-16 record in 2011-12, the program’s first winning season since 2005. The 19 wins were also a program high since the 2004-05 campaign. Rice participated in the 2012 CollegeInsider.com Postseason Tournament, winning two games to reach the CIT quarterfinals. A first-round win over Louisiana-Lafayette marked the Owls’ first postseason win since a first-round victory in the 1993 NIT.

He spent a year as a graduate assistant coach at Texas Tech under Naismith Memorial Basketball Hall of Fame coach Bob Knight after wrapping up his playing career at Indiana.

Prior to Indiana, Roberts played at South Eugene High School in Oregon before attending the New Hampton School in New Hampshire.