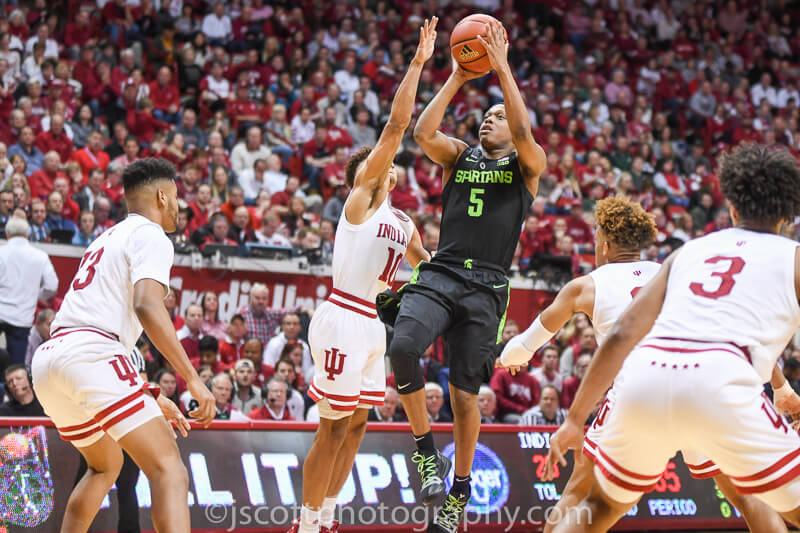 After focusing on key bubble games the last couple days, let’s check back in on the potential bid thieves still out there at this stage of Championship Week.

American – The team to keep an eye on here is Memphis, in large part because the tournament is being played on their home floor. After beating Tulane on Thursday, Central Florida is up next for the Tigers.

Atlantic-10 – Bubble teams will be rooting hard for VCU here, but it’s likely that Dayton or Davidson will make the final on Sunday, both of which could give the Rams trouble.

Big 12 – West Virginia is the Cinderella story here after finishing last in the league. The Mountaineers have already beaten Oklahoma and Texas Tech, setting up Friday’s matchup with Kansas.

Big East – The team to keep an eye on here is Xavier, who will have an interesting at-large case if they knock off Marquette on Friday.

Big Ten – Nebraska is the only potential bid thief still alive here, but the Huskers will need to pull off five wins in five days to go dancing. They face Wisconsin on Friday.

Mid-American – Buffalo’s chances of winning the tournament improved when Toledo got knocked off on Thursday, but if anyone other than the Bulls win this one, there will be one less spot for potential bubble teams.

Mountain West – Bubble teams desperately need Nevada or Utah State to win this tournament, and if both win their Semi-Final matchups on Friday, there will be a collective exhale.

Pac-12 – While I suppose you could make an argument against having Washington and Arizona State in the field, the focus here shifts to Colorado and Oregon, who have both played well of late.

I said on Tuesday morning that Virginia and Gonzaga were locked in on the one line, and it’s reasonable to question one of those after Tuesday night. Still, it’s important to keep in mind that it’s just one game out of 33 for Gonzaga, and it’s also their first loss against a team outside of the Top 10 of the NET. The Bulldogs’ win over Duke in Maui will still carry a ton of weight, and Gonzaga’s metrics are among the nation’s best. For now, I’m leaving them on the one line, as I don’t feel that one loss should drop them three spots on the seed list given their overall profile.

Outside of those, there are four main competitors for the remaining two top seeds. Thanks to a sweep of Duke and nine Quad 1 victories, North Carolina has moved to the one line earlier this week. The Heels are 11-1 on the road and don’t have a loss outside of Quad 1, but it’s possible that the return of Zion Williamson and a run in the ACC tournament from Duke could push the Blue Devils to the top line once again. We’ll know a lot more once we see UNC and Duke face off in the ACC Semi-Finals. I find it unlikely that three ACC teams would get one seeds, but after Tuesday night, the chances have increased.

The SEC has a similar situation with Kentucky, Tennessee, and LSU all in the mix. For now, Kentucky gets the nod after beating Florida on Saturday. The Wildcats have 10 Quad 1 wins, while Tennessee has better losses but fewer top-end victories. LSU’s situation is obviously in flux for a variety of reasons, but winning the regular season and tournament titles in the SEC could make things interesting.

Michigan State is the other team in contention, but they will need to make a deep Big Ten tournament run with Nick Ward back in the lineup while hoping for early exits from teams ahead of them on the seed list.

The projections below are based on all games played through March 14, 2019. Following the bracket, I included a few thoughts on the last four in as well as the other teams I considered.

St. John’s – It was a close call between the Red Storm and Ohio State to determine which team avoided Dayton, but I gave the nod to the Buckeyes. St. John’s did very little in the non-conference outside of beating VCU, and they lost two times each to DePaul, Providence, and Xavier. The Red Storm did sweep Marquette in the regular season before getting run off the floor against the Golden Eagles on Thursday night, and I ultimately don’t feel they are in true jeopardy. The last three teams were much harder to select.

Florida – After taking care of business against Arkansas on Thursday, the Gators will get another crack at LSU. Both games with the Tigers this season have gone to overtime with the road team emerging victorious in each contest. It’s important to keep in mind that Florida is just 3-11 against teams in the at-large conversation. All three of their Quad 1 wins have come on the road, but they have two Quad 3 losses among their 14 total defeats.

NC State – A huge comeback and late free throws propelled the Wolfpack to a win over Clemson in their ACC Tournament opener, but they were blown out by Virginia on Thursday. The Wolfpack’s non-conference strength of schedule is the worst in the nation, and just one of their nine ACC regular season victories came against a team with a winning league record (Syracuse). Additional home wins over Auburn and Clemson are helpful, but it seems like each year there is a team that winds up getting punished for a poor non-conference schedule, which this year just might be NC State. For now, the fact that all but two of their losses have come against teams in the Top 25 of the NET and decent metrics have them barely inside the cutline.

Alabama – The Crimson Tide came from behind to knock off Ole Miss on Thursday evening, setting up a rematch with Kentucky in the Quarterfinals of the SEC Tournament. Like so many other bubble teams, Alabama already has 14 losses, with two of them falling in Quad 3 and five of them coming against teams not in the at-large discussion. Home wins over Kentucky, Mississippi State, and Ole Miss are Alabama’s best, but it’s hard to see them making it into the field without another win over the Wildcats.

Creighton – The Bluejays still don’t have a loss to a team outside the Top 75 of the NET, but Thursday’s last-second loss to Xavier gave them their 14th defeat of the season. Creighton does have three Quad 1 wins, but the road win at Marquette is their lone victory over a team comfortably in the field.

Xavier – The late season surge continues for the Musketeers, who have won seven of eight following a six-game losing streak. While they have just one win against a team in the Top 50 of the NET, they do have four Quad 1 wins and five more in Quad 2. A pair of Quad 3 losses are holding them back, but a second win over Villanova would keep hope alive.

Texas – A Big 12 Tournament loss to Kansas dropped the Longhorns to 16-16. While they do boast five Quad 1 wins, I cannot see the committee putting in a .500 team.

Clemson – Wednesday’s loss to NC State dropped the Tigers to 1-10 in Quad 1 games, which feels like too much to overcome. Their lone bad loss came at Miami, but Clemson’s best wins have come against a Justin Robinson-less Virginia Tech, Syracuse, and Lipscomb, all of which were at home.