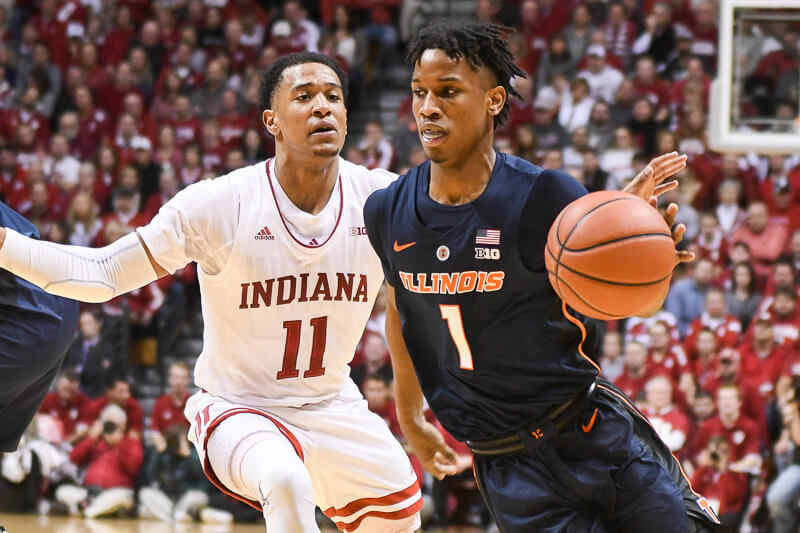 Indiana and Illinois will conclude their season series on Thursday night at the State Farm Center in Champaign. The Hoosiers won the first matchup, 73-65, on Jan. 3 in Bloomington. The Fighting Illini are 11-18 overall and 7-11 in Big Ten play.

Thursday’s game will tip at 8 p.m. ET on FS1 with Dave O’Brien and Stephen Bardo on the call:

Indiana’s wins last week at home over Wisconsin and Michigan State have thrust the Hoosiers back into the NCAA tournament conversation, but there is still work to be done. While Indiana’s postseason hopes are still alive, there’s no margin for error in the regular season’s final week.

In all likelihood, the Hoosiers must win on Thursday in Champaign and again on Sunday in Bloomington against Rutgers if they want to make the NCAA tournament without having to win the Big Ten tournament. That, of course, is based on the fact that no team has ever made the NCAA tournament as an at-large team with 16 losses.

It’s been over two months since Indiana and Illinois met in early January and both teams have taken different paths since that contest.

Indiana’s only wins since the Illinois game are over Wisconsin and Michigan State (twice) while the Illini are 7-5 over their last 12 league games.

What changed for Illinois?

As John Gasaway of ESPN pointed out on the most recent episode of Podcast on the Brink, the Illini’s young talent finally started to gain some confidence. The top three players for Illinois – Trent Frazier, Ayo Dosumnu and Giorgi Bezhanishvili – are all underclassmen.

Dosumnu and Frazier are one of the Big Ten’s best young guard duos as both average 14 points per game and Bezhanishvili, despite some recent struggles related to foul trouble, has a 35-point game under his belt and two other games with 20 since Illinois last met the Hoosiers.

Illinois is one of the Big Ten’s worst defensive teams, but the Illini have eclipsed the point per possession mark offensively in nine of their last 13 games. That’s significant because Illinois didn’t score more than a point per trip in its first five conference games, all of which were losses.

Combine the improved offense with a style of play that is up tempo and frustrating for opponents to play against because of its ability to force turnovers and Brad Underwood seems to be planting the seeds for a winning culture moving forward in Champaign.

Indiana’s problems, meanwhile, have been well documented in this space all season.

However, the Hoosiers do appear to have turned a corner in recent weeks despite winning just two of their last four games. After getting blown out by Minnesota in Minneapolis back on Feb. 16, Indiana has found renewed energy down the stretch and was rewarded last week with wins over a pair of ranked teams. Whether that fight can be sustained away from Bloomington in what is essentially a must-win game – Indiana is a woeful 2-9 in true road games this season – remains to be seen. 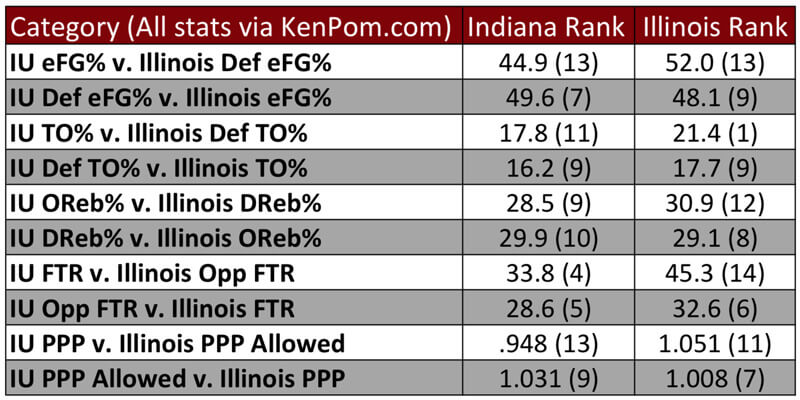 The challenge for Indiana on Thursday will be primarily centered around taking care of the ball and figuring out ways to generate good looks inside of the 3-point line.

No Big Ten team does a better job of forcing turnovers than Illinois as its conference foes are turning it over on 21.4 percent of their possessions.

In the first game, Indiana flipped that script on Illinois as the Illini posted a season-high turnover percentage of 30.1 on offense and the Hoosiers capitalized by winning the points off of turnovers battle, 22-10. A repeat performance shouldn’t be expected in Champaign, but Indiana will have Rob Phinisee healthy this time around, which wasn’t the case in Bloomington.

The Vegas line opened with Illinois as a 2.5-point favorite and the KenPom ratings like the Illini by one. The Sagarin ratings favor Indiana by one.

Both teams had unlikely heroes in their last win as Justin Smith stepped forward in a major way for the Hoosiers against Michigan State (24 points) and Andres Feliz hit 16 free throws and scored 26 points in an Illinois win over Northwestern on Sunday.

The Hoosiers, however, are going to need more from Romeo Langford and Juwan Morgan to emerge victorious in Champaign. Indiana’s win on Saturday over Michigan State was most surprising because it was the first game all season in which both Langford and Morgan failed to score in double figures and yet, it was still a victory for the Hoosiers. That’s unlikely to be a sustainable formula.

Indiana should be close to full strength – De’Ron Davis has been full go in practice, per Archie Miller – and the Hoosiers finally look to be hitting their stride in a season that looked like a lost cause nine days go. In a season that has had far more downs than ups, will Indiana continue its surge towards the bubble?