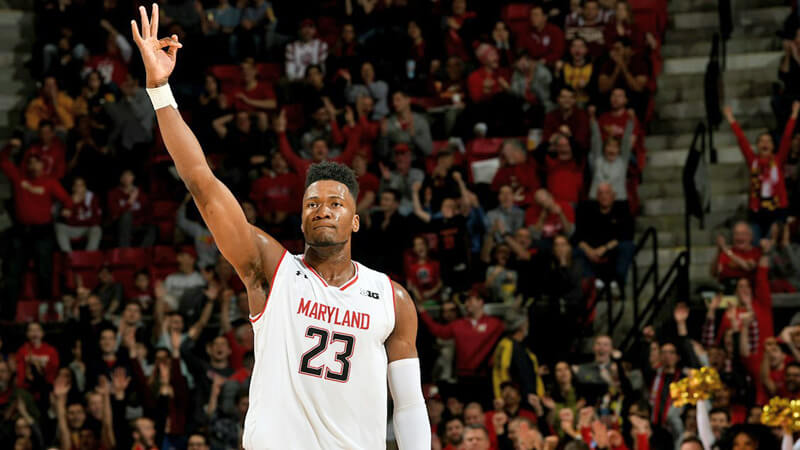 With ranked teams losing 15 games to unranked opponents since the last set of projections just eight days ago, there was a substantial amount of movement this week. Maryland was one of the biggest movers, as the Terps racked up a double-digit road win at Minnesota and knocked off both Indiana and Wisconsin at home. Elsewhere in the Big Ten, Ohio State picked up a surprising loss at Rutgers and lost by double-digits at Iowa to drop multiple seed lines.

There are plenty of other examples, but it goes to show just how fluid these projections are at this stage of the season. Resumes are still taking shape, and with conference play providing ample opportunities for quality wins, tournament profiles can change quickly.

At this point, I’ve selected the representatives from the single bid leagues based on who I think will win the league even though they may not be atop the conference standings right now.

Despite Duke’s home loss to Syracuse, the one seeds remain unchanged, although the Blue Devils did drop to the fourth on the seed list, which led to them being placed in the West region. With strong computer numbers and five quad one wins through Monday’s games, Duke’s profile is still terrific, and the committee will take into account that the Syracuse loss came with two of the team’s top four scorers missing all or most of the game.

Kansas continues to squeak out close wins and is the top team on the two line as of now. Michigan State is also surging thanks to a 10-game winning streak, and Gonzaga isn’t far behind after picking up a key road win at San Francisco over the weekend.

The projections below are based on all games played through January 15, 2019. Following the bracket, I included a few thoughts on the last four in and first five out.

Kansas State – The Wildcats evened their Big 12 record at 2-2 thanks to a narrow home win over West Virginia and a comeback victory at Iowa State. That win in Ames accounts for this team’s only true road win as well as its only win over an at-large caliber squad. A tough three-game stretch starts Wednesday with a road trip to Oklahoma followed by home dates with TCU and Texas Tech.

Arizona – Road wins at Stanford and Cal have the Wildcats tied atop the Pac-12, but that doesn’t mean much given the state of the conference this year. Much like Kansas State, Arizona’s lone victory over a tournament-level team came against Iowa State, although the Cyclones were not at full strength when they met in Maui. The Oregon schools visit Tucson this week, and the Wildcats can’t afford a slip-up on their home floor.

Arizona State – The Sun Devils seem intent on executing the same plan they used last year by getting the season off to a hot start before picking up a number of questionable losses. ASU ranked 82nd in the NET after Monday’s games despite owning four quad 1 wins, including victories over Kansas and Mississippi State. However, their last four losses have all come to teams not currently in the at-large conversation with the Princeton and Utah defeats coming at home.

VCU – I’m ultimately not convinced the A-10 can get two bids, but the Rams ranked second in non-conference strength of schedule through Monday’s games, which should at least get the committee’s attention. VCU has a pair of quad 1 wins, beating Temple on a neutral floor and winning at Texas, but a home loss to Charleston doesn’t help matters. The Rams have just three games remaining against Top 100 KenPom teams, one of which comes this week when Dayton comes to town.

Alabama – The Crimson Tide were the toughest omission this week thanks to five wins in quadrants 1 and 2 through Monday’s games, including home victories over Kentucky and Arizona. However, a trio of quadrant 3 losses cannot be ignored and have Alabama firmly on the cut line with road trips to Missouri and Tennessee on tap this week.

Butler – A pair of one-point road losses pushed the Bulldogs outside of the projected field this week. A home win over Ole Miss is aging well, but a winless road record and a 3-6 combined mark in quad 1 and 2 games through Monday are working against them. Butler heads to DePaul this week before returning home to Hinkle, where they’ll play four of the next five games.

Florida – The Gators fell to 1-3 in the SEC following a close loss at Mississippi State on Tuesday night. Through Monday’s games, they had no quad 1 wins, and victories at Arkansas and home against Butler are really the only ones of note. Florida desperately needs to take care of business in the next two games, which are at Georgia and home against Texas A&M, because the five-game stretch following those is brutal.

Pittsburgh – I mentioned Ole Miss as one of the season’s biggest surprises last week, and the Panthers belong in that conversation as well. Within the last two weeks, they’ve knocked off Louisville and Florida State while also playing NC State tough on the road. Pitt has yet to win a true road game and dropped a home date with Niagara earlier in the season, which means they’ll need to acquit themselves well with three of the next four games on the road if they want to remain in the discussion.

Creighton – If not for last week’s heart-breaking overtime loss to Marquette last week, things might be different for the Bluejays. Even so, Creighton doesn’t have a bad loss, but they also don’t have any quad 1 wins, with victories over Clemson on a neutral court and Providence on the road the only ones of note. They are also just 1-3 in true road games with trips to St. John’s and Georgetown next up on the slate.