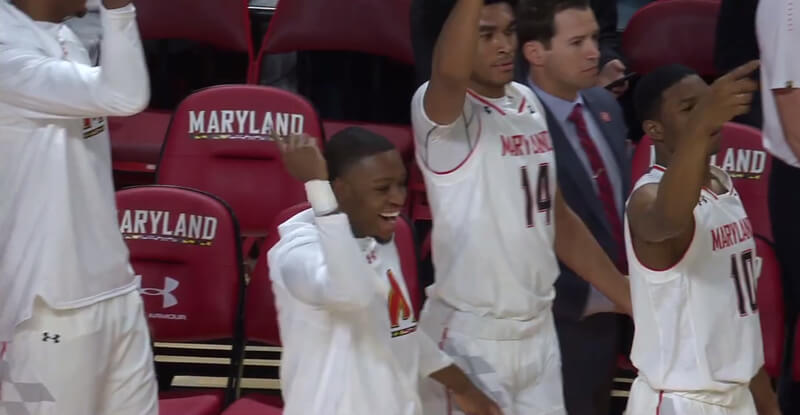 It finally happened. And on the road no less.

The Hoosiers, after so many slow starts, stormed out of the gates and left the Terps in their dust. It was a locked-in effort on both ends of the floor. For all the talk of Indiana’s disadvantage down low, Archie Miller’s plan to send a double over to Bruno Fernando kept him stagnant early. Indiana was pressuring the ball all over the place and Maryland fumbled along to a 7-of-23 performance from the field at the outset of the contest. Indiana was moving the ball on their end and finding the right shot and it didn’t matter which player was taking it.

To be sure, this sort of imbalance — the Hoosiers led by 14 at the 6:49 mark in the first half — was unlikely to be the case the entire game. And so Maryland started inching back in the closing minutes of the first half. But Al Durham Jr. banged home a 3-pointer to put the Hoosiers up eight followed by a Juwan Morgan swat of an Anthony Cowan attempt to close out the half.

Therefore, there was little doubt the Hoosiers had dictated the terms of the contest over the first 20 minutes. Freshman McDonald’s All-American Jalen Smith missed all seven of his shot attempts. Cowan hit just 3-of-9. Fernando made just 3-of-4 shots for eight points. You’ll more than live with that.

But over the final 20 minutes, things changed.

So for the second straight road content, the Hoosiers did a lot of good, but ultimately shot themselves in the foot too many times to emerge victorious. Indiana stopped tossing the quick double at Fernando, and he was an absolute unstoppable force in the second half, going a perfect 8-of-8 from the field, even banking in a 3-pointer, en route to 25 points. Indiana’s perimeter defense also took a step back, and Cowan’s 3-of-9 line in the first half turned into a strong 7-of-16 and 24 points for the contest. And while Smith (0-of-9, two points) never got it going, the Terps squeezed just enough out of Eric Ayala (14 points) to pick up a third scorer to help propel them to victory.

Maryland shot 50 percent from the floor (16-of-32), hit 14-of-16 from the line and scored 51 points in the second half. That was good for an insane 1.59 points per possession. All nine of their second-chance points came after the break, as their great offensive rebounding (45 percent for the game) finally started converting.

So despite a much-needed strong start, scoring 1.17 points per possession, turning the ball over on just 11 percent of its possession (a season low), going a perfect 16-of-16 from the line and getting a career-high from Romeo Langford (28 points), Indiana lapsed just a bit too much with its second half defense to pull out the upset tonight.

Justin Smith deserves a mention here as he was strong defensively and got the right shots (4-of-6, eight points). But he got into foul trouble in the second half and when he sat after his third foul, Maryland’s six-point deficit turned into a six-point lead, as Evan Fitzner struggled on both ends.

There’s more season to play and the Hoosiers, despite two straight losses, are no easy out.