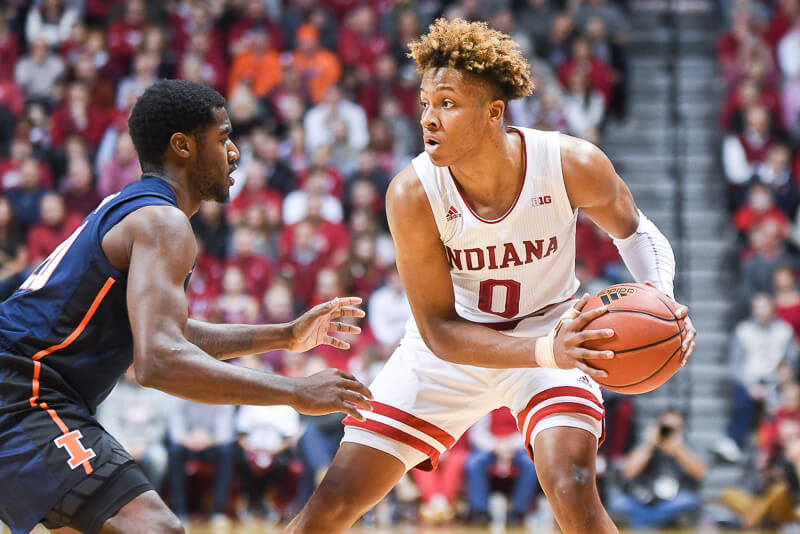 Here the Hoosiers went again with another slow start, the student-lacking Simon Skjodt Assembly Hall desperate to make some noise, but the on-court performance just not letting them.

The sweat on Archie Miller’s brow seemed a little more pronounced tonight, as Illinois got off to a hot start, punching out to a 25-15 lead at the 9:06 mark in the first half. Indiana settled for too many 3-pointers early in the shot clock and Illinois was having its way with the Hoosiers defense in both the half court and transition.

But as Indiana started to clamp down on defense and began working the ball for better shots over the remainder of the half, things started to fall into place. That 10-point lead was erased by halftime, as a Justin Smith tip-in tied up the ball game at 32-all heading into halftime.

And after the break, the Romeo Langford show was in full effect. He scored the first 10 points of the second half, which helped the Hoosiers get out to a double-digit lead, one they kept until the Illini made it somewhat interesting over the last few minutes of the contest. Langford played his most aggressive game of the season, as he relentlessly attacked the basket in this one — often drawing fouls in the process. The New Albany product even took possessions into his own hands at times, breaking his defender down one-on-one instead of finding the seams to the basket in the flow of the offense.

On a few of his scores off the dribble at the rim, he looked a heck of a lot like a young Dwyane Wade, a package of power and finesse that couldn’t be stopped. Langford ended the game with a career-high 28 points. He also hit 11-of-15 from the line, good for 73.3 percent.

With Robert Phinisee still sidelined with a concussion, Devonte Green got the bulk of the point guard minutes (33) again this evening. Green has been pretty solid with his increased workload as he totaled 11 assists vs. four turnovers against Jacksonville and Central Arkansas. This was not the case tonight, as Green had four turnovers against three assists. The junior also shot just 3-of-11 from the field and had a couple rough misses in the lane. Green did play solid defense on Trent Frazier, however, as the top Illini scorer only went 4-of-13 from the field.

With Indiana jacking up those early 3-pointers, it started just 1-of-8 from distance. That settled at only 2-of-12 for the game, as only Langford (1-of-4) and Juwan Morgan (1-of-3) hit from deep. But Indiana was solid at the line, making 71.4 percent (25-of-35) as Illinois only mustered 12 trips, making seven of them. And while the Hoosiers turned it over on 22 percent of their possessions against a team known for forcing them, Illinois was worse with the ball tonight (31 percent). This allowed the Hoosiers a 22-10 advantage in points off turnovers.

Tonight’s performance was far from flawless for the Hoosiers and it played a little closer than forecasted. Still, it was another opponent Indiana kept under a point per possession (.94) and a third conference victory in as many tries.

Sunday’s game up in Ann Arbor will be far more difficult than this and Indiana needs to play better if it wants to stand a chance.