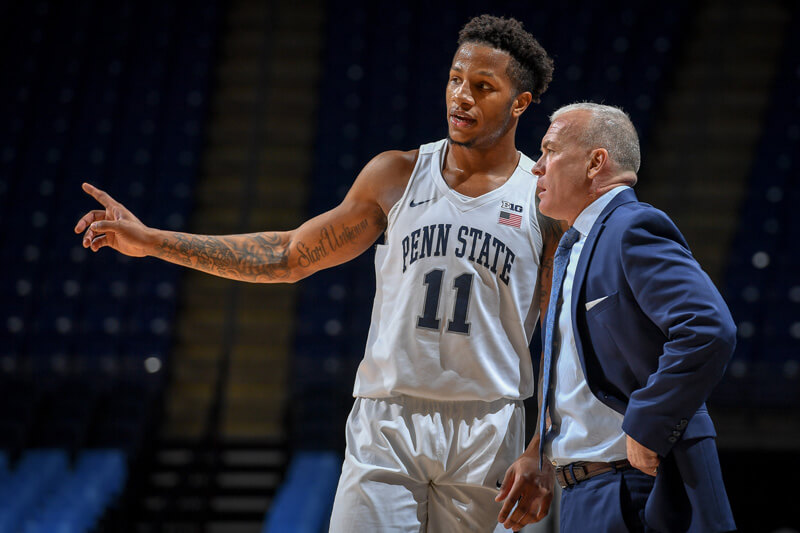 Indiana is back on the road Tuesday night as the Hoosiers travel to the Bryce Jordan Center to take on Penn State. The Nittany Lions are 4-3 and are coming off of a 66-59 loss at Maryland on Saturday.

The game will be broadcast at 7 p.m. ET on BTN with Kevin Kugler and Shon Morris on the call:

Indiana has taken care of business at home through its first eight games, but the Hoosiers are still in search of their first taste of success away from Bloomington.

After a narrow loss at Arkansas and a blowout at Duke, Indiana will travel to one of the most friendly road environments in the league in State College. Penn State has lost two of its last three games, but the win in that stretch came at home over then No. 13 Virginia Tech in the Big Ten-ACC Challenge.

Pat Chambers has never taken Penn State to the NCAA tournament, but his teams are always competitive and hard nosed.

The Nittany Lions won the NIT last season and currently boast one of the nation’s top ten defenses, according to the KenPom ratings. Historically, Indiana has been successful at the Bryce Jordan Center with a 4-1 record in their five meetings with the Nittany Lions in State College under Chambers.

It appeared Penn State might be in line to take a significant step back when Tony Carr declared for the NBA draft, but his departure may end up being addition by subtraction.

Carr was one of the Big Ten’s best guards last season, but he also dominated the ball and was a below average defender. Penn State won’t be able to replace his offensive ability, but the Nittany Lions could be more well rounded without Carr in the fold.

The clear headliner on the Penn State roster is junior forward Lamar Stevens, who is averaging a team-high 22.7 points and 8.6 rebounds per game. The 6-foot-8 forward has one of the 50 highest usage rates in the country and is shooting close to 50 percent on 2s and 80.9 percent from the free throw line.

Stevens has been excellent in transition (1.46 PPP, per Synergy) and in post-up situations (1.13 PPP). His ability to draw fouls has to be a concern for Indiana, which has struggled with early foul trouble in both of its road games.

Senior wing Josh Reaves is one of the Big Ten’s best two way guards. Reaves has great size for a two-guard (6-foot-5) and he ranked in the top 15 nationally the last two seasons in steal percentage. He’s off to a slow start this season efficiency wise because of high turnover numbers (32 TO%). He’ll almost certainly draw the Romeo Langford assignment on defense and he’s got the ability to make things tough on IU’s star freshman.

Freshman Myles Dread starts in the backcourt and is third on the team in minutes at 30.4 per game. Dread is making 58.8 percent of his 2s, but has been in a funk lately with just six points over Penn State’s last three games.

Sophomore Jamari Wheeler is starting at the point guard, but freshman Rasir Bolton is playing the most minutes at the position through seven games. Bolton is the team’s third leading scorer (11.1 ppg) and while he’s turnover prone, he made three 3-pointers against Virginia Tech that were crucial in the win.

Another freshman guard, Myreon Jones, scored 18 of his 32 points this season in the Virginia Tech win.

In the frontcourt, redshirt junior Mike Watkins returned recently from a suspension, but is still easing his way back into the rotation. At his best, Watkins is one of the Big Ten’s best rebounders and rim protectors. Watkins has scored just two points in two games this season (31 minutes) and has committed six fouls.

John Harrar, a 6-foot-9 sophomore, has been starting at the five and is averaging 4.4 points and 4.7 rebounds in just over 20 minutes game.

Penn State is 303rd in adjusted tempo, according to KenPom, and is going to push for a half court game in the 60s where it can limit possessions and try to win with its defense.

The Nittany Lions haven’t been very good at defending inside the 3-point line as opponents are shooting 51.9 percent on 2s. Where Penn State has been good is forcing turnovers (22.1 opponent turnover percentage) and that fact has to be of major concern for Archie Miller and the IU staff. It’s been a broken record through eight games, but Indiana has yet to prove it can take care of the ball reliably.

One reason for Penn State’s struggles offensively is its reliance on shooting 3s despite being a below average shooting team from the perimeter. Over 31 percent of Penn State’s points are coming on 3s, but the Nittany Lions are shooting just 31.1 percent from distance.

The Pomeroy projection is Penn State by 2 while the Sagarin ratings like the Hoosiers by 3. The Vegas line opened with Penn State as a 2-point favorite.

Obviously, the status of Juwan Morgan will have a lot to do with the outcome of this game. Morgan left Indiana’s win over Northwestern on Saturday with a right leg injury and didn’t return. He appeared to be in considerable pain, but the fact that he stayed on the bench rather than going to the locker room suggests that the injury isn’t serious. If you remember back to last season, Morgan suffered an ankle injury at Michigan State that sent him to the locker room, but he played the next game against Maryland at home.

Right now, the Big Ten looks like Michigan’s to lose, but if Indiana wants to claim a spot in that next tier of teams, this is a game the Hoosiers would be well served to win. With all but three Big Ten teams currently sitting in the top 50 of the Ken Pomeroy ratings, the league is deeper than expected and there simply aren’t going to be many opportunities for road wins.