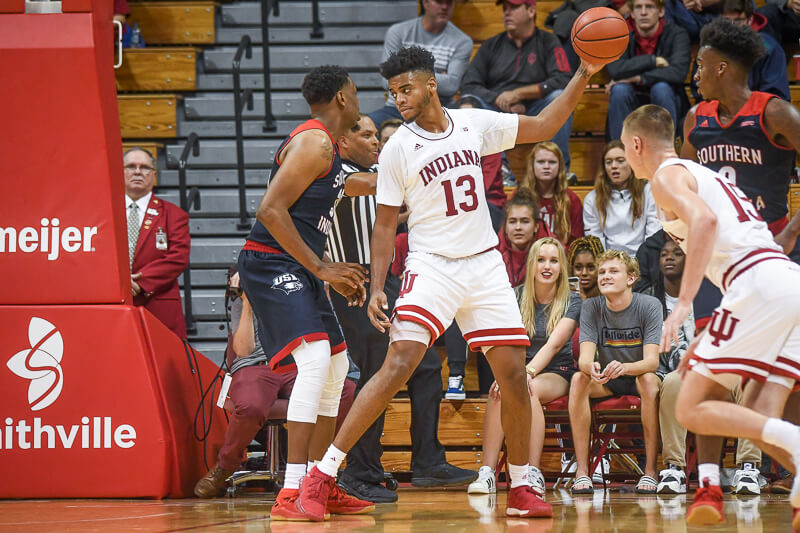 In its only public tuneup prior to Tuesday’s season opener, Indiana crushed Southern Indiana, 96-62, on Thursday night at Simon Skjodt Assembly Hall.

Here’s a look at five takeaways from the exhibition win over the Screaming Eagles:

Phinisee, starting in place of the injured Devonte Green, scored 13 points, dished out four assists and didn’t commit a turnover in 28 minutes.

The most heralded freshman, Langford, also had 13 points despite struggling with his shooting. The 6-foot-6 guard was just 4-of-12 from the field and also had five turnovers, but made up for it by grabbing five rebounds and collecting four steals in 31 minutes.

And Anderson, who could be fighting for a spot in the rotation, came off the bench to score 14 points on 5-of-8 shooting. On a team that is searching for reliable perimeter shooting, the South Bend Riley product has a chance to claim a role if he can consistently make 3s.

• Indiana’s defense looked great … for a half: Through the first 20 minutes, Indiana’s length and athleticism caused plenty of problems for Southern Indiana.

The Hoosiers held the Screaming Eagles to 25 percent shooting and just .53 points per possession in the first half.

With a comfortable lead, Indiana’s defense wasn’t nearly as sharp as Southern Indiana made six 3-pointers and scored 42 points and mustered a point per possession after halftime.

“Fatigue. Guys played too many minutes,” Archie Miller said. “Second thing would be transition defense, having guys take the ball to the basket, whether it’s Romeo, Rob, Justin (Smith), guys on the baseline, not having rotations getting back. That was a big problem.”

• Davis takes another step in long road back: The numbers won’t stand out in the box score, but Thursday marked another step in the rehabilitation process for De’Ron Davis.

On Thursday, Davis logged just six minutes before appearing to tweak his ankle. In his brief appearance, the junior big man scored six points, but picked up three fouls.

“He’s having to play himself into shape during the games, which is really hard to do,” Miller said. “I don’t know how many he played tonight, but he’s picking up quick fouls.”

• Injuries eating into IU’s depth: While we’ve touted IU’s depth as a potential strength this preseason, the Hoosiers are thin right now, particularly in the backcourt.

Although it’s unclear if any of these injuries will cause time to be missed in the regular season, having Green and Durham Jr. either out or limited makes the backcourt depth thin.

• Morgan gets assertive early in second half: After a standout junior season, expectations are high for Juwan Morgan in his final season in Bloomington.

Morgan wasn’t assertive in the first half, but that changed in the second half. And when the Hoosiers found him in the post, he either scored or drew a foul.

“He’s got to demand the ball. Get the ball where he wants it, when he wants it,” Miller said. “I thought the start of the second half put him in the focal point of what’s going on. Got him the ball, guys found him. He wanted the ball.”

Morgan drew five fouls in the exhibition and finished with 12 points in 25 minutes.