Around the Hall: Reaction to NCAA’s rules changes 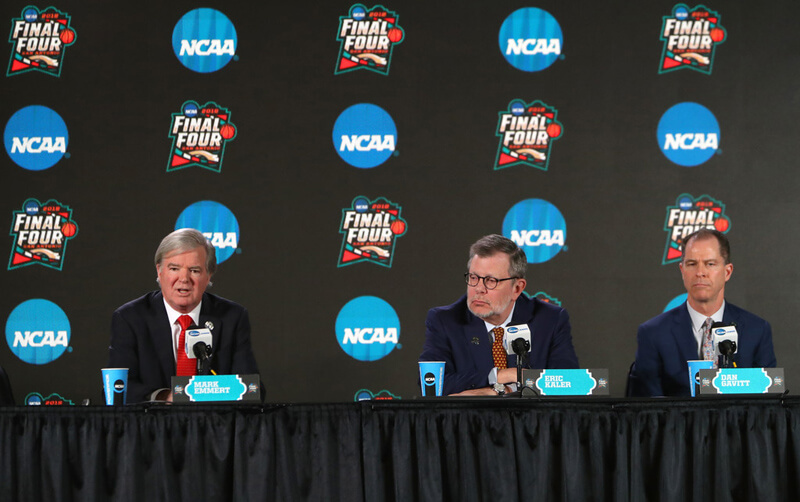 Around the Hall is recommended reading from the Inside the Hall staff. (Photo credit: Mike Lawrie/Getty Images North America)

Mike DeCourcy of The Sporting News didn’t hold back when offering his thoughts on the NCAA’s changes:

The truth is the Rice Commission was designed to do something. That’s all. Just something. It wasn’t about creating effective change that would make college basketball better. It was just made to give the impression that Emmert and the NCAA were on the case.

If you pay no attention to the details, you might even believe it.

Rick Bozich of WDRB.com writes that the changes won’t fix the money problem in college basketball:

The changes the NCAA announced Wednesday will not redirect enough of the goodies toward the players. The coaches, the administrators and the schools will still be the ones getting rich.

The players will get a modestly better deal, but not enough to stop the behind-the-scenes corruption that college basketball (and college football, another story) has winked at for years.

Reid Forgrave of CBSSports.com looks at the NCAA changes and concludes that they won’t change the NBA Draft:

But in a world where college basketball is increasingly seen as an extension of the NBA’s minor leagues – a world view that, by the way, virtually ignores the 4,100 or so draft-eligible men’s collegiate basketball players who aren’t drafted into the NBA – the changes that the NCAA trumpeted as “profound and meaningful changes to college basketball” will hardly impact the NBA Draft or the prospects who are hoping to be selected.

Perhaps the best example of this “good on the surface, somewhat meaningless beneath” is one of the major headlines out of the NCAA’s announcement. The NCAA said that players who declare for the draft but go undrafted will be allowed to return to college. This is a good thing! You never want a 19-year-old young man to, in the course of one Thursday night in June, have his dreams dashed of being drafted and then come to a realization that he can’t return to college, work on his game, continue his education and try again next year. My heart went out to the talented Duke freshman point guard Trevon Duval when he went undrafted this June. Not only was the former top-10 recruit without an NBA team but he was also without the option of returning to college to improve during a sophomore season. That’s a huge, huge bummer.

According to Adrian Wojnarowski of ESPN.com, both the NBA and USA Basketball were blindsided by Wednesday’s announcement:

Top officials with the NBA and USA Basketball were blindsided by the timing and changes in the NCAA’s announcement of future rules surrounding pro basketball prospects, sources told ESPN.

The NCAA launched a commission and set of subcommittees to address the fallout of the FBI investigation into the college basketball industry, resulting in several policy shifts — including the assigning of responsibility to USA Basketball for something the organization had already told the NCAA it wanted no part: bearing responsibility for selecting elite senior high school prospects who will be allowed to sign with registered agents.

USA Basketball doesn’t have the infrastructure or interest in accepting the role of evaluating the nation’s top prospects for a yet-to-be-determined number of players who will annually be allowed to sign with agents at the end of their junior years, sources told ESPN.

Rob Dauster of NBCSports.com writes that the changes won’t change much of anything:

The changes that the NCAA officially ratified on Wednesday will do next-to-nothing to curb the kind of cheating that got the FBI involved in the world of college basketball.

And while some of the rules that were put into place will have an effect on the sport, for the most part this is window dressing, an effort to convince people that don’t know the difference that they, the NCAA overlords aghast at the corruption in their sport, are taking this oh so seriously.

Because the simple fact of the matter is this: Condoleeza Rice’s Commission on College Basketball was specifically tasked with eliminating the cheating that grew rampant enough for the Justice Department to decide that they would make breaking NCAA bylaws a federal offense, and none of the changes that they recommended and pushed into the college basketball rulebook will fix that.

They did not change the amateurism model, and thus, they will not put so much as a dent in the flow of money from those that have it — shoe companies, boosters, agents, the coaches themselves — to those that have value with no way to capitalize on it — the players.

At SBNation.com, Ricky O’Donnell is also bearish on the changes:

This was an opportunity for the NCAA to make a bold, progressive statement, to lead college sports into the future and salvage a gigantic money-making operation that people still care deeply about. It could have allowed athletes to profit off their likeness. It could have put additional infrastructure in place to help its players handle the demands athletics and school. It could finally put a fork in the amateurism model that is so obviously obsolete.

The NCAA didn’t do any of that when it announced its changes on Wednesday. Instead, the NCAA doubled down on its own core values, increased its punishments for breaking rules and enhanced its own power in dishing out penalties.

Did the commission adequately address the issues it set out to solve?

No. The commission’s goal was to address corrupting influences in college basketball. Right now, the NCAA thinks it has taken control of the entire scene. It will manage the grassroots events. It will generate severe penalties for violators. It will allow agents access but only with its approval. It will force coaches to find room for undrafted players.

Over at UMHoops.com, Dylan Burkhardt broke down the changes and how they could affect Michigan:

High school prospects were previously allotted five official visits (trips to a college campus where all expenses are picked up by the college) to use in their entire recruiting process.

Now prospects will be allowed to use 15 official visits starting in August before their junior year of high school (one per school per year). This is a significant change and one that should benefit Michigan.

Michigan’s offer policy is well established. The Wolverines require a full visit with academic tour and transcripts before offering a scholarship — a significantly higher barrier to entry than some schools which hand out scholarship offers like they are swiping right. That requisite visit can be difficult to setup for prospects who are located outside of Michigan and can’t afford the travel to see campus.