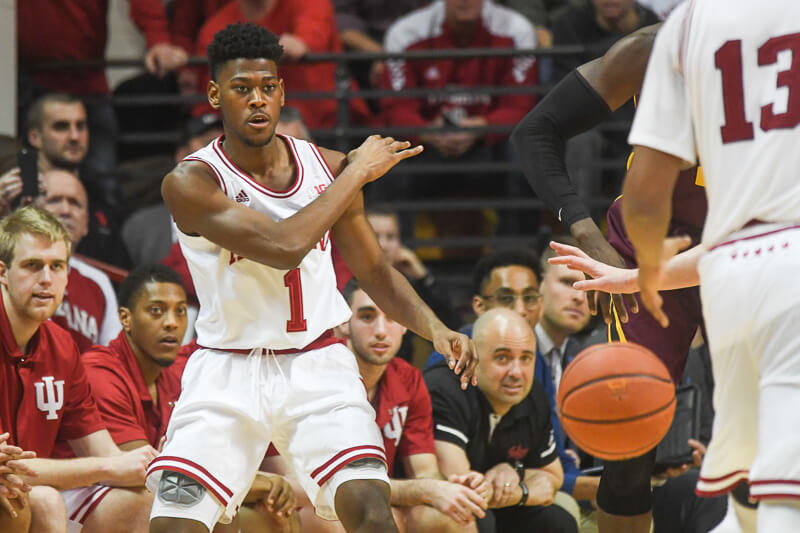 The first of three recruits in the class of 2017 to pledge to former coach Tom Crean, Al Durham Jr. didn’t take long to make his presence felt in Bloomington.

After a pair of shaky performances to start the season against Indiana State and Howard, Archie Miller shook up his starting lineup for the third game of the season at Seton Hall.

Durham Jr. was one of two freshmen to earn a start in Newark and although the Hoosiers were beaten soundly by the Pirates, the freshman from Lilburn (Ga.) showed that he wouldn’t be intimidated by the big stage. Durham scored 10 points in the loss.

The 6-foot-4 lefty would go on to earn nine starts in his first season, but like most freshmen, he had his share of ups and downs.

Early in the season, Durham’s minutes increased in large part because of his ability to defend, draw fouls and take care of the ball. Over the season’s first nine games, Durham had 19 assists to just five turnovers. He was also 8-of-21 on 3s (38 percent) during that stretch and averaged 7.8 points per game.

But as teams had a chance to scout Durham and make adjustments, he struggled to produce with the efficiency he exhibited over the first nine games of the season. In Indiana’s 71-62 loss at Louisville on Dec. 9, Durham committed a season-high five turnovers. And after making eight 3-pointers in the first nine games, he shot just 6-of-28 (21.4 percent) from distance the rest of the season.

One area of Durham’s game that remained consistent throughout the season was his defense. According to Synergy Sports, he was Indiana’s best individual defender in terms of points per possession allowed (.66). Opponents attempted 125 field goals on the season when guarded by Durham and made just 35. That number ranked in the 93rd percentile nationally and was significantly better than Devonte Green and Josh Newkirk. Green ranked in the 58th percentile in the same statistic and Newkirk was in the 46th percentile.

The key for Durham moving forward will be diversifying his offensive game. The strength of his game at this point is getting into the lane and drawing fouls. Durham’s free throw rate (FTA/FGA) of 48.7 percent was easily the highest among Indiana’s guards. According to Synergy, he scored an efficient 1.15 points per possession in pick and roll situations as the ball handler. In spot up situations, that number fell to. 88 points per possession and was just .89 in transition possessions. In order to keep defenses honest in the future, Durham’s perimeter shot must become more reliable.

Bottom Line: After coming to campus as a 3-star recruit who was often overshadowed on his Nike EYBL team by Collin Sexton, Durham’s freshman season exceeded expectations. He was an above average defender as a freshman and showed off an ability to get into the lane and draw fouls. If he continues to make strides this offseason, he should be in line for more minutes and an increased role as a sophomore.

Quotable: “Al is a high level IQ for a freshman. You can just watch him play and some of the plays he makes, he makes them look easy. And he’s obviously got a good feel for the game. So as we continue to play and practice he’s only going to get better.” – Miller after Durham’s 16-point performance against Howard in early November.