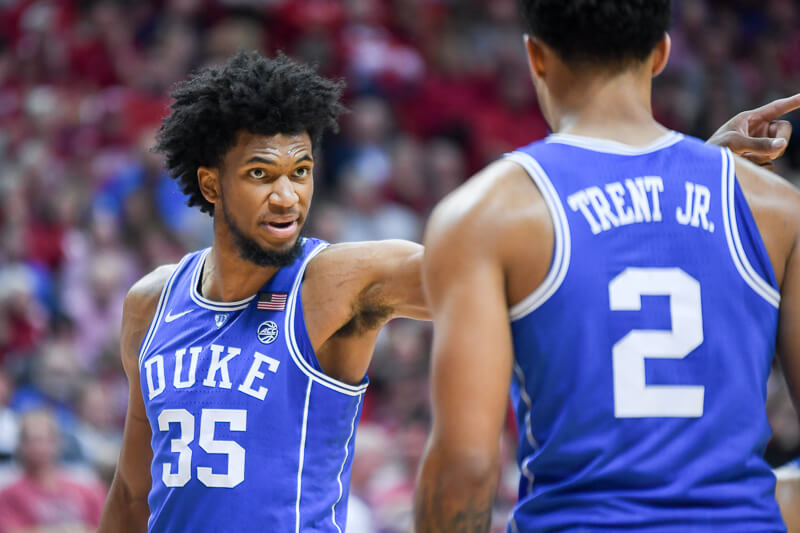 Thursday proved to be an interesting day on the bubble. Providence and Kansas State picked up key wins in overtime, while Alabama won at the buzzer to keep their at-large hopes alive. USC and UCLA also took care of business in the Pac-12 tournament.

However, teams like Marquette, Oklahoma State, Louisville, Notre Dame, and Baylor all lost by at least 13 points, which puts them in a perilous position heading into the weekend. Throw in an overtime loss by C-USA favorite Middle Tennessee, and things are starting to get more crowded around the cut line.

Over the next couple days, I will continue to review where teams are currently seeded. Championship Week is awesome from a basketball standpoint, but it doesn’t allow as much time to step back and take a fresh look at how teams stack up.

The projections below are based on all games played through March 8, 2018. Following the bracket, I included a few thoughts on the last four in and first six out.

Arizona State – It’s been a precipitous fall for the Sun Devils, who were ranked in the top five in the nation after beating Xavier and Kansas. The good news is they have home wins over USC and UCLA, a road victory at Utah, and a neutral court win over Kansas State in addition to those two marquee victories. The bad news is they are just 4-6 in quadrant 2 games and have at least five losses to teams with no shot at an at-large.

Saint Mary’s – While predictive metrics like KenPom and BPI really like Saint Mary’s, there isn’t much meat on the actual resume following a WCC tournament loss to BYU. The Gaels have a huge road win at Gonzaga, a home victory over New Mexico State, and a regular season sweep of BYU, but 24 of their 28 victories came against quadrants 3 and 4. They accomplished very little in the non-conference while picking up losses to Georgia and Washington State, and a Saint Mary’s team with a relatively similar profile was left out just a couple years ago. A 10-1 mark in true road games helps the cause, but they are definitely a team I will be analyzing more closely over the remainder of the week.

USC – Despite finishing second in the Pac-12, it’s worth noting that USC has yet to beat a team that’s an at-large lock with wins over Middle Tennessee State and New Mexico State their two best. Throw in the Bennie Boatright injury, and it just feels too easy and maybe too logical to leave USC out. That said, their two worst losses aren’t quite as bad as they look, as the SMU defeat came with the Mustangs at full strength and the home loss to Princeton coming in a game that multiple rotation players missed. The Trojans took care of business against Oregon State in the Pac-12 Quarterfinals, setting up a matchup with Oregon in the semifinals.

Middle Tennessee – The Blue Raiders rallied to force overtime against Southern Miss in the C-USA quarterfinals, but they fell behind early in OT and could never recover, suffering their first sub-100 defeat of the season in the process. So now they will have to sweat it out despite a gaudy 16-2 record in the league, a Top 10 non-conference strength of schedule, and an impressive 12-1 mark in true road games. The issue, however, is that MTSU has no wins over at-large caliber teams, although they did lose by single digits to Auburn, Miami, and USC in non-conference play. For now, I am leaving them in the field, but their grip feels tenuous at best.

Oklahoma State – The Cowboys were unable to beat Kansas for a third time on Thursday, but their at-large case is still an intriguing one. They boast five quadrant 1 wins with no losses to teams outside of the Top 65 of the RPI. The main issues are a RPI in the mid-80s and a non-conference strength of schedule hovering in the 280s. And while head-to-head matchups aren’t everything, Oklahoma State was swept by fellow bubbler Baylor.

Louisville – After falling to Virginia once again, the Cardinals are in a difficult spot. The good news is that they don’t have a bad loss, but they also have zero wins against the RPI top 50. The predictive metrics love Louisville, and four of their five best wins have come in road or neutral games.

Baylor – The Bears own four quadrant 1 wins and have just one loss to a team not in the at-large picture. A 2-9 mark in true road games doesn’t help, but they did win a pair of neutral court games over Creighton and Wisconsin back in November. The predictive metrics like the Bears as well, but losing to West Virginia on Thursday night may have been the final nail in the coffin.

Marquette – After a 24-point loss to Villanova, the Golden Eagles are on the outside looking in. They have a 5-5 mark in true road games and a winning record in total road and neutral games to go with four quadrant 1 wins, but none of those have come against a team in the RPI top 25. Four more victories in quadrant 2 help their case, but a loss at DePaul is a clear blemish on their profile.

Notre Dame – The Irish hung with Duke for a while but eventually lost by 18 points. As I mentioned earlier in the week, Notre Dame suffered two of its worst losses while at full strength, and they now have just two wins over at-large caliber teams with everyone healthy. Still, the injury-related aspect of their profile makes the Irish a more compelling case than their resume would suggest.

Syracuse – The Orange made a second half run at North Carolina but eventually lost by nearly 20 points in the ACC tournament. Last Saturday’s home win over Clemson was a huge one for their at-large case, while road wins at Miami and Louisville also fall in quadrant 1. Bad losses at Georgia Tech and Wake Forest are the biggest issues, and it’s worth noting that 14 of Syracuse’s 20 wins fall in quadrants 3 and 4.