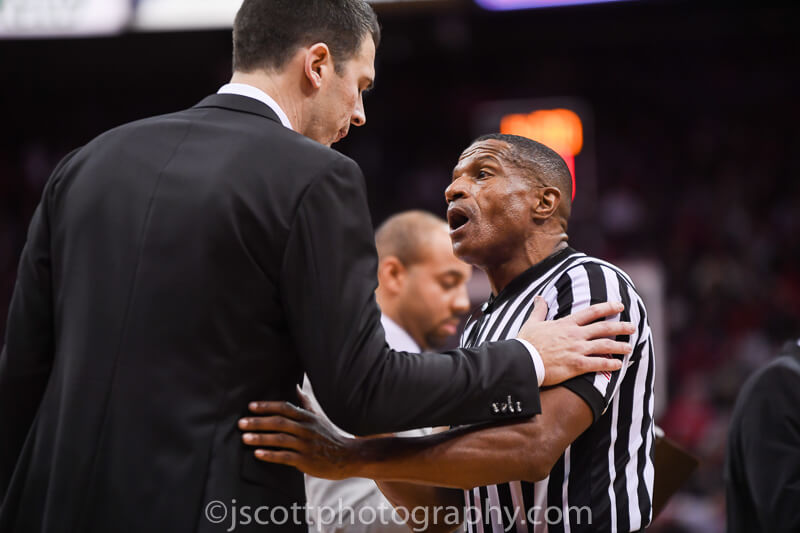 Bucknell was the only team to earn an automatic bid on Wednesday, but that certainly doesn’t mean the day was short on drama.

Teams on the outside looking in like Louisville, Oklahoma State and Notre Dame picked up key wins, while early season darlings like Arizona State and Oklahoma continued their slide toward the cut line by losing their first conference tournament games.

A quick note on the Sooners, who ended up higher than I expected in these projections. The committee has said that it doesn’t give additional weight to the last 10 games, which I am taking at face value. The reality is they have just one loss to a team not in the at-large picture, and they have five wins against the RPI Top 25 and six total quadrant 1 wins.

All of the teams mentioned above will be rooting against potential bid thieves as more conference tournaments get underway. At this point, there are three leagues that have the greatest potential to wreak havoc on the at-large picture.

Middle Tennessee finished 16-2 in Conference USA and owns a non-conference strength of schedule that ranks among the nation’s best. The Blue Raiders have a pair of quadrant 1 wins (at Murray State and at Western Kentucky) and lost their other three quadrant 1 games by six points or less. A Top 30 RPI and a 12-1 mark in true road games help their case as well, but I wouldn’t call them an at-large lock at this stage. If they lose in the C-USA final though, I find it hard to believe they’d be left out.

In the Mountain West, Nevada is the squad bubble teams should be pulling for. The Wolf Pack boast a Top 20 RPI with a Top 20 non-conference strength of schedule. Like MTSU, Nevada has two quadrant 1 wins, which came against Rhode Island at home and on the road against Boise State. They have five more victories in quadrant 2, but a pair of quadrant 3 losses will hold down their seed. Still, Nevada is poised to go dancing regardless of what they do in the MWC Tournament, which means if any other team runs the table, there will be one less spot up for grabs.

Both Rhode Island and St. Bonaventure are in my projected field, with the Rams the safer of the two A-10 schools. Like Nevada, Rhode Island ranks in the RPI Top 20 with a pair of quadrant 1 wins. They have just one bad loss and a non-conference strength of schedule among the five best in the country.

The Bonnies look relatively safe as well, although a loss in their first A-10 Tournament game could make things interesting thanks to a trio of losses in quadrants 3 and 4. Davidson feels like the only team outside of Rhode Island and St. Bonaventure that is capable of stringing together enough wins to earn the automatic bid.

The projections below are based on all games played through March 7, 2018. Following the bracket, I included a few thoughts on the last four in and first five out.

Marquette – After nearly being knocked off by DePaul late on Wednesday night, the Golden Eagles are still clinging to the final at-large spot, thanks in large part to a 5-5 mark in true road games and a winning record in total road and neutral games. The Golden Eagles also have four quadrant 1 wins, although none of those have come against a team in the RPI Top 25. Four more victories in quadrant 2 help their case, but a loss at DePaul is a clear blemish on their profile. Marquette gets a third crack at Villanova in the Big East Quarterfinals on Thursday.

Oklahoma State – I’m not sure how possible it is for the Big 12 to get nine teams in the Big Dance, but the Cowboys knocked off Oklahoma on Wednesday and boast five quadrant 1 wins (including a sweep of Kansas) with no losses to teams outside of the Top 65 of the RPI. The main issues are a RPI in the mid-80s and a non-conference strength of schedule hovering in the 280s. Still, if the Cowboys can beat Kansas for a third time in the Big 12 Quarters, Oklahoma State can certainly make things interesting as we head toward Selection Sunday.

Louisville – The Cardinals played well in Wednesday’s win over Florida State, setting up a rematch with Virginia. The good news is that they don’t have a bad loss, but they also have zero wins against the RPI Top 50. The predictive metrics love Louisville, and four of their five best wins have come in road or neutral games. Still, the Cardinals face an uphill battle if they can’t find a way to knock off Virginia on Thursday.

Notre Dame – The Irish rallied from a 21-point deficit to knock off Virginia Tech and keep their at-large hopes alive. As I mentioned yesterday, Notre Dame suffered two of its worst losses while at full strength, and they now have just two wins over at-large caliber teams with everyone healthy. Still, with other bubble teams struggling, a win against Duke on Thursday would make their case more compelling.

Syracuse – The Orange made a second half run at North Carolina but eventually lost by nearly 20 points in the ACC tournament. Last Saturday’s home win over Clemson was a huge one for their at-large case, while road wins at Miami and Louisville also fall in quadrant 1. Bad losses at Georgia Tech and Wake Forest are the biggest issues, and it’s worth noting that 14 of Syracuse’s 20 wins fall in quadrants 3 and 4.