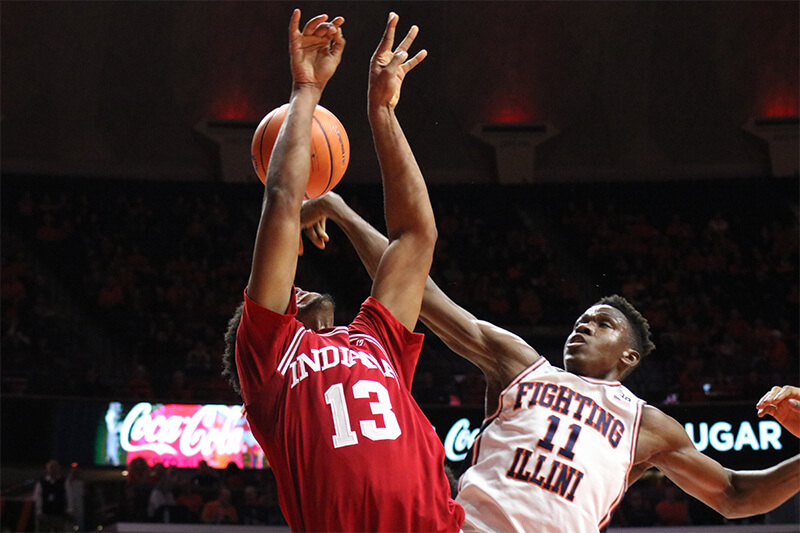 Coming into this one, the narrative went like this: Illinois fouls more than almost any team in the country, but Indiana has the worst free throw percentage in the Big Ten.

If this played to form, with the Illini’s pressure defense racking up fouls on the Hoosiers, Indiana was going to need to make its free throws against an Illinois team desperate for its first conference win of the season.

Indiana’s free throw shooting was abysmal this evening, as the Hoosiers shot just 16-of-29 (55.2 percent) from the line.

“It seems to become something for our team that’s a little bit contagious,” Archie Miller said after the game.

Juwan Morgan, for as great as he was otherwise, hit 3-of-8. Collin Hartman made 1-of-4. Had Indiana just shot its season average — 66.7 percent, which ranked 305th in the country coming into the contest — it would have been another three to four points and a likely victory for the Hoosiers.

Instead it was a frustrating performance and loss.

After a first half the Hoosiers controlled, Illinois started the second half on a 6-0 run, hitting shots and turning up its defense to make things harder for the Hoosiers. Indiana had some costly turnovers in the second half — none more so than Devonte Green’s bad pass to Morgan with three seconds to go. Morgan was open under the hoop and had a chance to tie the game at 73-all. Green had some great passes at other times in this game, but his shot selection remains questionable and when Indiana needed it from him late he threw it off Morgan’s ankle.

And yet, Indiana remained in the hunt in this one all the way to the very end. Both teams went on seriously long scoring droughts in the second half and the Illini shot just 4-of-15 from distance for the contest. It allowed the Hoosiers to hang around despite their troubles. But in the end, Illinois finally got over the hump for a conference win after some close tries and the Hoosiers finally lost a close one of their own.

Beyond another great performance from Morgan and his 28 points, nine rebounds, three assists and one steal, Zach McRoberts scored an Indiana career-high with 10 points. McRoberts hit two 3-point attempts in the first half. In fact, all of his 10 points came in the first 20 minutes of the contest.

Tonight’s loss drops the Hoosiers to 5-4 in conference. Barring a big upset over its next three contests — Purdue, at Ohio State, Michigan State — they’re likely to drop under .500 in conference play.

While this team has made strides on defense, has a star in Morgan and is playing with more precision, tonight’s loss is a reminder the Hoosiers has some serious shooting weaknesses that can’t always be covered up.