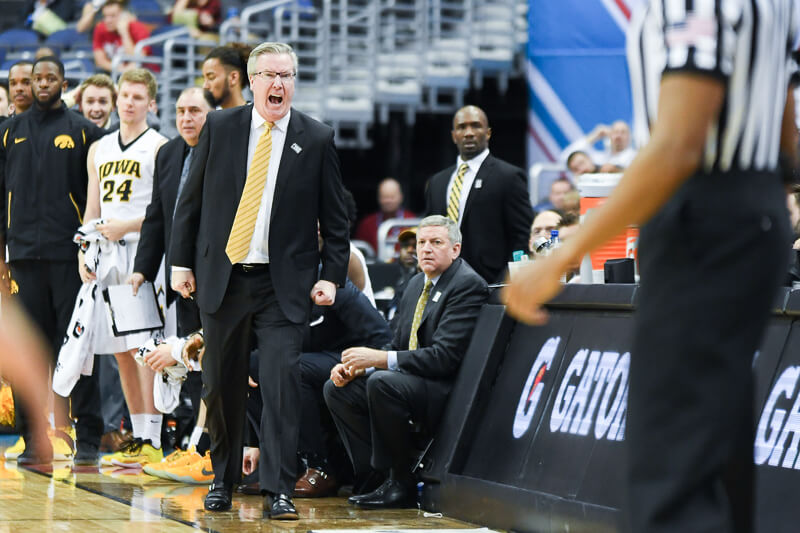 Indiana will try to stop a two-game losing streak tonight as the Hoosiers host Iowa at Simon Skjodt Assembly Hall. The Hawkeyes are 4-4 overall and have lost four of their last five.

The game will be broadcast on BTN at 8 p.m. ET with Kevin Kugler and Stephen Bardo on the call:

Two games are in the books from Indiana’s brutal five-game stretch.

The Hoosiers battled Duke in the Big Ten-ACC Challenge for 36 minutes before falling 91-81 on Wednesday night. That hard fought loss was followed by an uninspired performance on Saturday in Ann Arbor as Michigan cruised to a 69-55 victory.

Indiana will take the floor tonight in desperate need of a win as Iowa comes to Simon Skjodt Assembly Hall.

The Hawkeyes, a trendy preseason pick to finish in the top half of the Big Ten, are coming off a 77-73 loss to Penn State on Saturday evening. Both teams have challenging games coming after tonight’s contest as Indiana goes to Louisville on Saturday and Iowa travels to Iowa State on Thursday for a rivalry game.

After losing four starters following the 2015-16 season, Iowa has a big void on the perimeter this season following the graduation of Peter Jok.

To replace the offensive production vacated by Jok, the Hawkeyes have one of the best young duos in the league in sophomore point guard Jordan Bohannon and sophomore forward Tyler Cook.

The 6-foot-9 Cook is the team’s go-to scorer through eight games. Cook’s 15.9 points per game lead the Hawkeyes and he’s already taken 60 free throws. He’s coming off a 23-point, 12-rebound performance against Penn State in which he grabbed seven offensive rebounds.

Bohannon, meanwhile, is making 49 percent of his 3s and is averaging 13.4 points and 4.8 assists per game. The 6-foot point guard is struggling inside the arc (30.4 percent on 2s), but is an excellent free throw shooter (87.5 percent). According to Synergy Sports, Bohannon is excellent in spot up situations as he’s scoring 1.36 points per possession which ranks in the 91st percentile nationally.

Joining Cook up front are freshman Luka Garza and Nicolas Baer, who missed the first six games with a finger injury. Garza is a plodder who finishes well (59.1 percent on 2s) and is excellent on the defensive glass (25.9 DR%). Free throw shooting, however, has been a problem as he’s just 16-of-35 through eight games.

Baer, last season’s Big Ten sixth man of the year, is a career 38.4 3-point shooter who is 1-of-8 from deep through his first two games. He shot 43.3 percent on 3s last season in Big Ten games, which ranked seventh in the conference.

Look for freshman Jack Nunge and sophomore Cordell Pemsl to both come off the bench for McCaffery. Nunge, a Castle product, is 6-foot-11 with the ability to step out to the perimeter. He’s 7-of-15 on 3s this season and is also hitting 63.6 percent of his 2s. Pemsl is a back to the basket big man who is a capable rebounder on both ends.

Joining Bohannon in the backcourt is Isaiah Moss, the team’s second leading scorer. The 6-foot-5 sophomore is 41.7 percent on 3s and averages 13.8 points per game.

Ahmad Wagner, a 6-foot-7 junior, will back up Baer at the three and averages 3.3 points and three rebounds in 13.3 minutes per game. 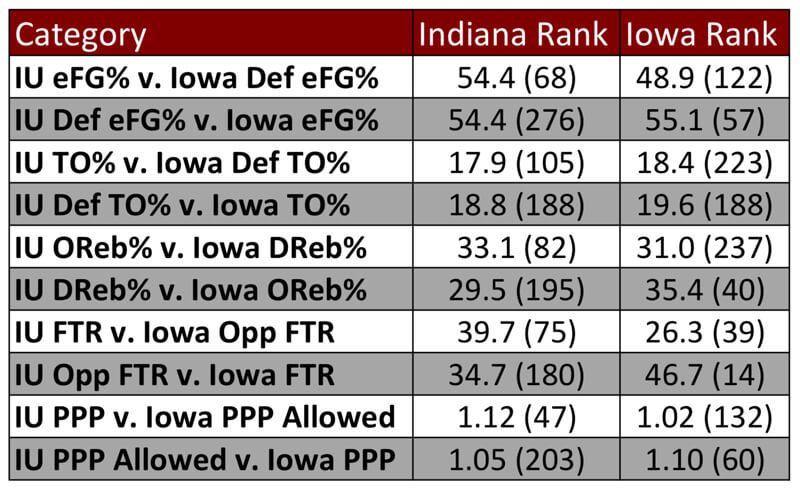 Iowa’s strengths offensively are clear cut. The Hawkeyes can shoot the 3, get to the line and offensive rebound. Bohannon, Moss and Nunge can all knock down the 3 with efficiency and Cook can take over a game in the paint with his ability to get second chance points.

But as strong as Iowa is on the offensive glass, the Hawkeyes are vulnerable on the defensive glass. Iowa is just 237th in the country in defensive rebounding percentage. The Hawkeyes also struggle to force turnovers, which makes it imperative for Indiana to take care of the ball.

Most of Indiana’s offensive metrics are solid, sans a 3-point percentage that continues to trend downward. The Hoosiers are shooting just 33.1 percent on 3s and are just 7-of-28 from deep over their last two games.

Defensively, Indiana continues to struggle with its closeouts on the perimeter (Ryan highlighted this yesterday in Film Session), which is a definite concern against Iowa.

The KenPom projection is Indiana by 2 with a 59 percent chance of a Hoosier victory. The Vegas line, which opened with Indiana as a 4.5-point favorite, is now 5 as of Monday morning. Sagarin’s ratings like Indiana by 3.5.

The keys are Indiana are straight forward: take care of the ball, win the rebounding battle and avoid early foul trouble for De’Ron Davis and Juwan Morgan. Morgan will likely be tasked with guarding Cook and if the Hoosiers opt to help in the post, it is crucial that shooters aren’t left unattended in the process.

Indiana has the advantage playing at home, but the Hoosiers need a solid start to energy the Assembly Hall faithful which produced a terrific atmosphere last week for the Duke game.

Can the Hoosiers avoid starting 0-2 in Big Ten play for the second straight season?