Keion Brooks Sr. on Hysteria: “I thought it was done at a high level” 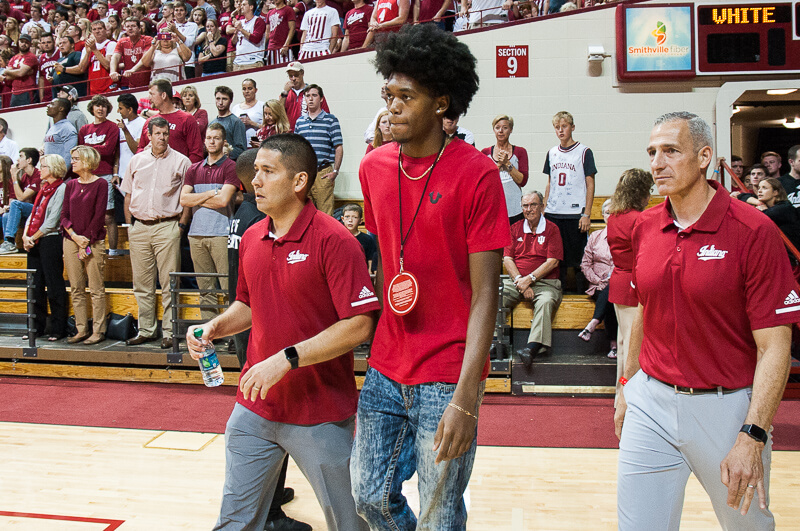 The Hoosier coaching staff has prioritized the class of 2019 forward since taking over in late March and Saturday night was a special experience for Brooks and his father, Keion Brooks Sr.

“I thought it was done at a high level by the coaching staff and by the university and the athletic department,” Keion Brooks Sr. told Inside the Hall on Sunday evening. “They made the recruits really feel special and wanted. Whenever you feel wanted, it’s a good thing and you really get a chance to enjoy it. The atmosphere was just great in there.”

Brooks Jr., the No. 23 prospect nationally according to the 247Composite, has scholarship offers from Indiana, Purdue, Michigan State, Kentucky, Kansas and several others.

Keion Brooks Sr., who played for Indiana assistant coach Ed Schilling at Wright State, has been impressed by the emphasis the coaching staff is putting on the in-state kids.

Another highly regarded class of 2019 Indiana prospect, Trayce Jackson-Davis, was also in attendance for Hysteria.

“I think they’re doing a great job of recruiting the kids in Indiana. They’ve done a great job with the 2018 class,” he said. “If they land (Romeo) Langford, they’ll really have done a really good job. I think they’re genuine guys that are straight up. I think the priority is all of the Indiana kids. They want to bring that back to Indiana and they got a great group of kids in the state right now that could really do that.”

Hysteria, which featured player introductions, remarks from Archie Miller to the crowd, a shooting and dunk contest and a scrimmage, was the public’s first look at the 2017-18 Indiana team.

Brooks Sr. said his primary takeaway from the 24-minute scrimmage was how hard Indiana’s players competed.

“The kids really played hard. Almost too hard for a midnight madness,” Brooks Sr. said. “If you can do that in an event like that, it’s going to be a good thing that they’re going to be doing in the season that you’re going to see.

“That’s one thing that you always want to see is a team play hard. And I think coach (Archie Miller) has got the guys in a situation where they’re really going to be ready to compete. That’s the beginning of it. You’ve got to know how to play hard.”