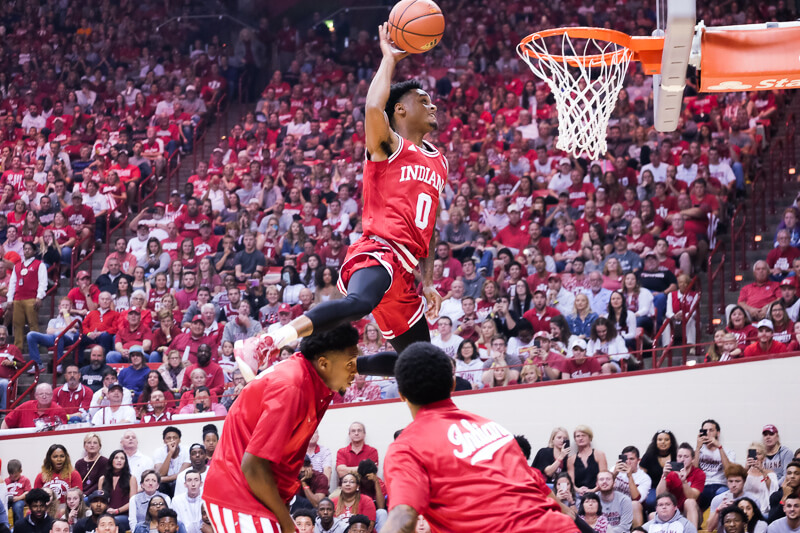 Unlike previous editions of Hoosier Hysteria, there was no guest host. Besides the fireworks during the introductions, the pizazz was kept to a minimum.

Before the festivities started, the thousands gathered in Simon Skjodt Assembly Hall roared as one by one, IU recruiting targets and commits were paraded across the court to their designated seats. Among the recruits in attendance: five-star 2018 guards Romeo Langford and Darius Garland and 2019 five-star forwards Trayce Jackson-Davis and Keion Brooks. Class of 2018 commits Damezi Anderson, Jerome Hunter and Robert Phinisee were also in the building.

The loudest ovation went to Langford. The New Albany star was at the center of fans attention for much of the night, as his name was chanted in unison across the arena on at least four different occasions.

The men’s team was introduced one-by-one, with Archie Miller walking onto the court last. Every fan in the building stood up and applauded for Miller, who spoke for roughly four minutes.

“Tonight is a prime example of why you want to be a part of Indiana basketball,” Miller said to the thousands gathered. “This is a great celebration for our storied and unmatched past, all the tremendous players and coaches, the unbelievable championship pedigree. This is the start of our staff’s ability to recognize the great fans that represent us every year.”

Miller’s speech ended with a surprise tribute to Bill Garrett the first African-American basketball player to play in the Big Ten. Following Miller’s remarks, two of the late Garrett’s children joined the men’s team at center court to a raucous applause.

The next event was a 3-point shooting contest featuring four teams of two, with a men’s player paired with a women’s player. The team of Josh Newkirk and Ali Patberg won the contest, defeating Robert Johnson and Tyra Buss in the final round, 34-28.

The dunk contest was somewhat of a dud, as the two freshman participants, Clifton Moore and Justin Smith, failed to get quality slams off within the 45 second time limit. Sophomore Curtis Jones blew away the competition by dunking over De’Ron Davis in the second round.

The scrimmage consisted of two 12-minute halves. Josh Newkirk, Al Durham and Collin Hartman were held out for precautionary reasons.

Sophomore Devonte Green led all scorers, pouring in 14 points. Green shot the ball with confidence and knocked down a pair of threes, but his most impressive play came on a drive in the second half, when he hit a runner over Race Thompson while drawing a foul in the process.

Sophomore De’Ron Davis struggled in the first half, picking up fouls and committing a travel inside. In the second half, Davis showed improvement, scoring nine points. Davis posted up Freddie McSwain often and even hit a contested elbow jumper. Davis’ best moment of the night came early in the second, when he used an up-and-under move to blow by Clifton Moore for an easy layup.

Other players that impressed were Robert Johnson, who scored 12 points and nailed several shots from well beyond the 3-point line and Tim Priller, who set strong screens throughout and crashed the boards.

The scrimmage was marred by turnovers and lacked the offensive execution that will be necessary once the regular season comes around, but the defensive effort was encouraging.

“We played good defensively, but I think we could definitely cut down on the turnovers and work as playing as a team,” Green said after the scrimmage.

Indiana’s two-game exhibition slate begins next Saturday with a contest against Marian University. Tip-off is set for 8 p.m.