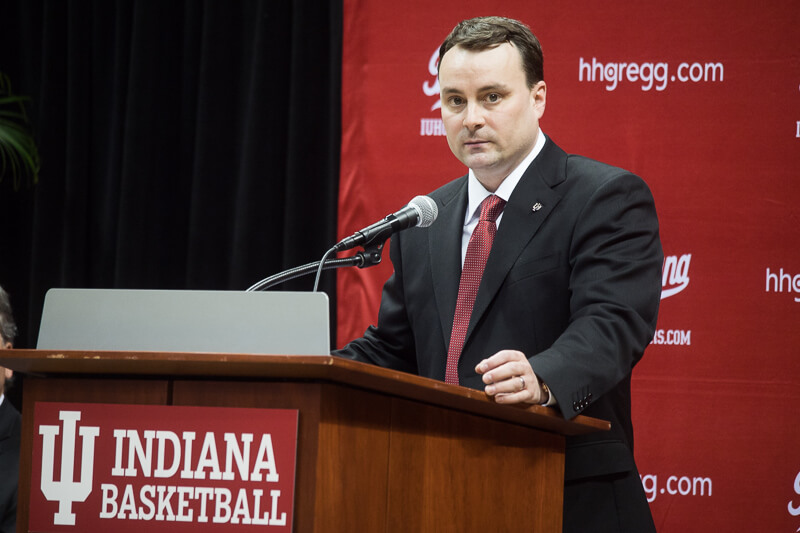 Following the Big Ten’s release of the conference schedule, Indiana released its complete schedule for the 2017-2018 season on Wednesday afternoon.

You can view the complete schedule over on our schedule page.

BLOOMINGTON, Indiana – With four non-conference games against teams that are preseason nationally ranked and two Big Ten Conference contests among the first 11 games of the season, the 2017-18 Indiana men’s basketball program will not have to wait long to see where it stands as the Hoosiers begin their first season under head coach Archie Miller. Times and television designations for all of the games this season will be released at a later date.

“I think we have a challenging schedule that gives us a lot of opportunities to become a better team,” noted Miller. “As I said before, scheduling is the second most important thing we do besides recruiting. Our goal is to create a schedule that has our fans excited. We have the No. 1 team in the country (Duke) playing their only road game prior to conference play in our building and that speaks for itself, but with the two exhibitions and games against Indiana State and Fort Wayne, I’d expect there would be great interest in visiting Simon Skjodt Assembly Hall this year.”

IU basketball fans will get their first look at the program up close at Hoosier Hysteria presented by Smithville on Saturday evening, October 21. An exact time for the event, which also introduces the women’s program, will be released at a later date.

The early league games are due to the Big Ten Conference hosting this year’s conference tournament in Madison Square Garden in New York, February 28 thru March 4, a week earlier in the season than normal.

The Hoosiers looked locally when it put together its two-game exhibition schedule in Simon Skjodt Assembly Hall. IU will host Marian (Oct. 28) and Indianapolis (Nov. 5). The Knights Athletic Director, Steve Downing, is an IU Athletics Hall of Famer, men’s basketball All-American and was a long-time department administrator. The Hoosiers and Greyhounds will meet for the fifth time since the Cream and Crimson began playing lower division programs in 2004.

The Hoosiers will play the first of four preseason nationally ranked opponents when it travels to Seton Hall (Nov. 15) for their second appearance against a Big East opponent in the Gavitt Games. IU also will host consensus preseason No. 1 Duke (Nov. 29), travel to Louisville (Dec. 9) and take on Notre Dame (Dec. 16) in the Crossroads Classic in Indianapolis.

IU will conclude its non-conference portion of its schedule with three home games after final exams. IU and Fort Wayne (Dec. 18) will complete their three-game arrangement a year ahead of schedule, Tennessee Tech (Dec. 22) returns to Bloomington for the fourth time and first since 1993, and the Hoosier and Youngstown State (Dec. 29) will meet for the first time ever.

“With Seton Hall, Louisville, Notre Dame and nine Big Ten opponents away from home, we have a chance to put together a very good resume,” said Miller.

Since Simon Skjodt Assembly Hall was opened in November, 1971, IU has ranked in the top 10 in attendance in 39 of the last 45 seasons. Last year, the Hoosiers finished ninth in the nation in fan support.